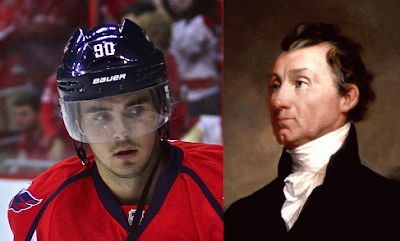 America’s fifth President, James Monroe, is not the revered figure in American history that other Presidents are.  He is not mentioned in the same breath as a George Washington, or an Abraham Lincoln, or a Franklin Delano Roosevelt.  That is not to say he was not an effective President, perhaps worthy of a little more “good feeling” than he generally gets.  In that respect, he is not unlike a current Washington Capital – Marcus Johansson.

You might say that James Monroe had a “first round” pedigree in his development.  He studied law under Thomas Jefferson, was Governor of Virginia, served as a diplomat to France where he helped negotiate the Louisiana Purchase, and served as Secretary of State and Secretary of War under James Madison.

Marcus Johansson became a first round pick of the Capitals by effecting a steady, purposeful rise through the ranks of hockey in Sweden – the IF Malmo Redhawks, the Swedish U-18 national team, Lulea HF, Farjestads BK Karlstad U18, Skare BK, Farjestads BK Karlstad, the Swedish Junior National Team.  It prepared him to become a 24th overall selection for the Capitals in the 1990 NHL Entry Draft.

Marcus Johansson has no “doctrine” as James Monroe has, but there is something of a connection here.  For those of you who have forgotten just what the Monroe Doctrine is, here it is in the “author’s” words… “as a principle in which the rights and interests of the United States are involved, that the American continents, by the free and independent condition which they have assumed and maintain, are henceforth not to be considered as subjects for future colonization by any European powers. . .”  In other words, any efforts by European nations to colonize territory in the Western Hemisphere would be considered an act of aggression requiring an American response.

But did he write those words? No, he didn’t.  It turns out that the wording came from his Secretary of State, John Quincy Adams.  Not to take away anything from Monroe, who certainly was an advocate for the point of view reflected in the statement, but it sort of shows the importance of teamwork.

As for Johansson, it is worth noting (and we have in the past) that Johansson is among the brightest stars of his draft class.  Seventh in games played, eighth in goals scored, fourth in power play goals scored, fifth in assists, fifth in points.  Since he came into the league with the Caps in 2009-2010, he is fifth on the team in games played, fourth in goals scored, fourth in assists, third in total points.  However, over those years, Johansson spent the bulk of his 5,407 minutes of 5-on-5 ice time playing along side Alex Ovechkin (1,864 minutes) and Nicklas Backstrom (1,533 minutes).   It would be hard not to be productive playing more 5-on-5 minutes with those two forwards than with any other for the Caps over that period.  Not to take anything away from Johansson, who certainly has been productive in that role, but it demonstrates the value of teamwork.

As President, James Monroe’s administration was one characterized by a disinclination to draw party lines.  He made appointments without regard to partisan affiliation for many posts, a behavior that led to his era being called the “Era of Good Feelings,” although there are those who employ the term with a measure of sarcasm.  Marcus Johansson is a player who in a sense epitomizes “good feelings.”   Since he came into the league in 2010-2011, no player in the NHL has appeared in at least 375 games and accumulated fewer penalty minutes than Johansson (52).

James Monroe is often lost in the reverie of our Founding Fathers and as a result might not be accorded the respect he deserves as President and in his other capacities.  But, in an aggregate ranking of American Presidents, there he is, in 16th place, between Ronald Reagan and Barack Obama. Marcus Johansson might not be generally recognized among the best of his generation of hockey players, either in the NHL generally or the Capitals specifically, but he has made his contributions.  In that respect, there are some things that the two have in common.