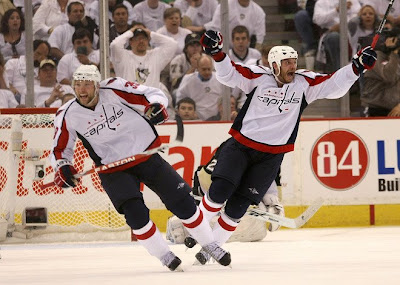 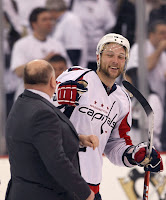 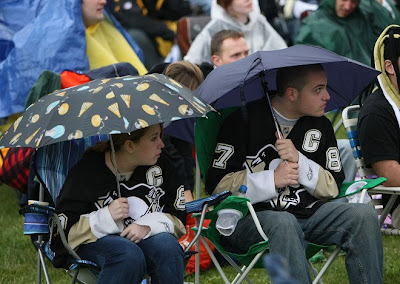 The Peerless Prognosticator is ON THE AIR!!! -- Eastern Conference Semifinals, Caps vs. Penguins...Game 6

Can they? Sure. Why?

- The Caps are 5-1 in elimination games under Bruce Boudreau, 2-0 on the road.

- The Caps have won two games in Mellon Arena this year, scoring ten goals in the process. Those ten goals were scored by seven different players… they could use some of that sharing of the wealth tonight.

- The Caps are 2-0 in Monday playoff games the last two years (a 4-2 win in Game 6 of last year’s opening round series against the Flyers and a 4-0 win against the Rangers in Game 3 of this year’s first round series).

- The Penguins have played only one Monday night home game this season, a 4-3 loss to Buffalo on December 8th.

- In games following back-to-backs (that is, when the Caps then get a day to rest), they are 8-5 this year.

- Although he’s struggled in this series, Alexander Semin has not gone consecutive games without a point in this year’s playoffs.

- Although he’s struggled in this series, too, Mike Green has points in seven of his last eight games.

Cheerless… I thought you’d be stopping by. Guess you have the Caps to lose tonight.

“Nope… too easy a pick. Besides, if a horse named ‘Mine that Bird’ can come in at 50-1 in the Derby, I like the chances for the Caps to ‘mine that bird’ tonight.”

Never mind. Fearless, you got a pick?

“The Caps have played to their opponent’s level all year. Sometimes, that hasn’t worked out well – giving up 24 goals to Atlanta in six games this year comes to mind. But that means the Caps have been at their best when facing their toughest opponents this year, too. They were 14-2-4 against Atlantic Division teams this year – the best winning percentage against a division of any team in the East – and have already beaten the Rangers. The Penguins are a step up in class, but they can do this.”

“The game on January 14th holds a clue… persistence. Even after allowing an early goal, the Caps tied, tied again (after the Penguins regained the lead), then pulled away after the Penguins tied the game in the third period. So, what are you looking for, cousin?”

Splits. For example, in the regular season Mike Green was 22-34-56, +33 in 43 games the Caps won in which he played this year. On the other hand, he was 9-8-17, -9 in 25 losses. It would be hard to find more disparity between performance in wins and losses anywhere on the Caps’ roster.

There isn’t any mystery here. Statistics look better in wins than in losses. But what it suggests is that the guys who carry the biggest burden now have to have their biggest game (until Wednesday night, that is). But guys who haven’t chipped in need to be heard from, too (remember, in that January 14th game – a 6-3 win – the Caps got goals from Kozlov, Tomas Fleischmann, and Jeff Schultz; and they got a pair of assists from Brooks Laich).

“Up until now Dallas hasn't been afraid of you, and they should be because you have a powerful weapon working for you. There is no tomorrow for you, and that makes you all very dangerous people!”

No one seems afraid of the Caps now, losers of three straight and seemingly in the clutches of The Penguin Curse one more time. And there is no more powerful weapon than the realization that if you lose, the next time you lace up the skates in anger won’t be until October.

Guys, you can do this.