Brooks Laich
Theme: “What is good? All that heightens the feeling of power, the will to power, power itself in man.”
-- Friedrich Nietzsche

Power is something of a recurring theme in Brooks Laich’s 2010-2011 season. First, if you look at this season compared to last, the results are almost duplicates of one another with one very important exception: 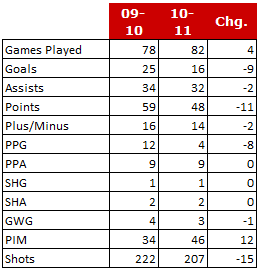 No power play goals scored after his third ten-game segment (Game 26, the first goal in a 4-1 win over St. Louis that happened to be the last game the Caps won before their eight-game losing streak). This is not a trivial consideration in Laich’s season when looked at in the context of the three seasons that came before. Because looking at those seasons, he is not an especially prolific scorer at even strength:

Another way of looking at Laich’s drop in power play production is that among seven forwards who averaged at least 1:00 power play time per 60 minutes, Laich finished last among Caps forwards in goals per 60 minutes at 5-on-4 (those who played the entire season with the club and appeared in at least 20 games). He dropped from 2.77 goals per 60 minutes at 5-on-4 in 2009-2010 to 0.53 in 2010-2011. He went 52 consecutive games without so much as a power play point. And here is the stunning fact accompanying those numbers. Laich faced the worst competition of any Caps forward at 5-on-4 (and it wasn’t close: Laich, according to behindthenet.ca – the source of all the numbers in this paragraph – had a QUALCOMP value of -0.461, Mike Knuble was nest at +0.246).

The even strength and power play numbers end up married to another summary number – 7.7. That was Laich’s shooting percentage for the season and by far his lowest since 2006-2007. An appropriate benchmark here is Mike Knuble. One might expect (or perhaps more precisely, “hope”) that Laich would assume much of the role a Knuble fills – a forward with size who can contribute by scoring goals in close and on the power play. Except that Knuble – in what was his worst year in some time in this regard – had a shooting percentage of 11.8 percent. Had Laich converted his 207 shots on goal with the same frequency he accomplished the feat in 2009-2010 (itself not close to a career best), he would have finished with 23 goals, almost what he recorded in 2009-2010 (25).

On the other side of special teams, Laich averaged more shorthanded ice time in 2010-2011 than any other Capitals forward (2:18/game). And among Caps forwards that averaged more than 1:00 ice time per 60 minutes, Laich had the second best differential of goals against/on ice to goals against/off ice per 60 minutes at 4-on-5: 1.50 (Marcus Johansson’s differential was higher: 1.70). He also faced the second highest quality of competition when on ice at 4-on-5.

Game to Forget… November 22, 2010. It was the last in a string of utterly forgettable games for the Caps. After having dropped a 5-0 shutout in Atlanta and a 5-4 Gimmick loss to the Flyers at home, Laich and the Caps lost a 5-0 shutout in New Jersey. Laich was for two of the goals in this one and was on the ice for five of the 13 goals scored in that three game stretch (one other goal coming on a penalty shot, the other the difference in the Gimmick).

Post Season… A post-season of 1-6-7, even, is not exactly the worst of outcomes, but it served as a microcosm of Laich’s season, too. No power play goals, one power play assist. And even though he finished 1-2-3 in the four game sweep at the hands of Tampa Bay, he recorded only eight shots on goal in the four games, five of them coming in Game 2 in which he scored his only goal of the series.

In the end, there seems to be less to Laich’s season than meets the eye. Although he finished fourth in total scoring, he was fifth in goals, and his power play goals total decreased significantly from his previous season. He was second on the Caps in playoff scoring, but his 4.8 percent shooting percentage was far from what the Caps needed (one goal).

Moving forward, Laich is about to test the unrestricted free agency waters (if he does not re-sign before July 1 with the Caps). Some might look at his numbers and think he is potentially a top-six forward. But looking at his numbers, we see something different. A reliable third line forward who can kill penalties and who can (when on top of his game) provide some additional power play punch. If a team thinks that is worth $4.5 million a year, more power to them and to Laich. But at the moment, as the free agent signing period approaches, Laich has power…even if there wasn’t as much as fans might have liked on the power play.

Email ThisBlogThis!Share to TwitterShare to FacebookShare to Pinterest
Labels: 2010-2011 by the tens, Brooks Laich, the peerless prognosticator, Washington Capitals

Theme: “Hard work is the yeast that raises the dough “
-- Unknown

Mike Knuble’s career is a study in the virtues of perseverance and hard work. He did not play his first game in the NHL until 1997 the age of 24 after having been drafted in the fourth round by Detroit in 1991. He did not play in more than 60 games until he was 26 and after he was traded by the Red Wings to the Rangers for the 1998-1999 season. He didn’t surpass 20 goals for a season until he reached the age of 30 and was playing for Boston. But since that 2002-2003 season – one in which he recorded 30 goals – he has posted eight consecutive 20-plus goal seasons, including the 24 he put up in the 2010-2011 season with Washington. And we would wager than most of the 218 goals he scored over the past eight seasons were achieved within 15 feet of the net. Not a place for the faint of heart or those who are allergic to hard work.

Not that 2010-2011 started all that well for Knuble. He recorded only three goals in his first 20 games, and in the 20th game took a puck to the face midway through a 5-0 loss to Atlanta that knocked him out of the lineup for three games (the only three he would miss in the regular season). Things didn’t get a lot better on his return. He recorded two goals in his third ten-game split, but he was starting to come around in his fourth ten-game split. He had three goals in nine games heading into the last game of that segment – Game 40 of the season, which happened to be the Winter Classic in Pittsburgh.

In that January 1st game, Knuble got the Caps on the board after Evgeni Malkin gave the Penguins the first lead early in the second period. The Caps would go on to win the game, and the goal scored by Knuble propelled him to 16 goals in his last 43 games (a 31-goal pace per 82 games). He scored nine goals in his last 13 games to close the season with a rush. Not bad for a 38-year old geezer. His overall ten-game splis looked like this:

Despite the slow start, Knuble finished third on the team in goals, fifth in total points, and tied for the team lead in power play goals. He was rather responsible with the puck, recording 45 takeaways and only 18 giveaways, the 2.50 ratio being second best among forwards on the club who played in at least 50 games (of course, Knuble’s not being called upon to do a lot of puck-handling no doubt contributed to that result).

If there is anything remarkable in Knuble’s drill-down numbers it is their “unremarkableness.” Fifth among forwards in goals for/on ice per 60 minutes at 5-on-5 (20 games with Caps minimum); fifth best goals against in those situations; fifth best plus/minus in those situations (numbers from behindthenet.ca). He faced the sixth highest quality of completion among Caps forwards, and (as befits someone who skated primarily on the top line) had the highest quality of teammates at 5-on-5. He had the second highest Corsi value relative to his teammates (grouped with his usual linemates Nicklas Backstrom (first) and Alex Ovechkin (third) in that measure).

One number stands out from the others, though – 11.8. That was Knuble’s shooting percentage for the season, and it was the lowest he recorded for any season since he shot 10.9 percent with Boston in 2003-2004. It was still good for fourth on the team in shooting percentage, but for someone who generally doesn’t shoot from the outside, it was a bit of an unexpected result. Here is how his numbers compared to last season:

Game to Remember… March 18, 2001. Knuble had a hand in all three Capitals goals in a 3-0 decision in New Jersey over the Devils. He assisted on a goal by Jeff Schultz to open the scoring, then scored two of his own in putting up what would be the first of consecutive three-point games. He repeated the three-peat four days later in Philadelphia with a goal and two assists, the second assist coming on a game-tying goal with 3:19 to play. The Caps won the game in a Gimmick, 5-4 over the Flyers.

Game to Forget… October 19, 2010. Knuble has done well against one former team – the Flyers. But not so well against another on this night. He was on the ice for the first two Boston Bruin goals – scored in the first 12 minutes of the game – while he went without a point (minus-2). He would go until April before he would be as bad as a minus-2 again.

Post Season… In a way, he would probably like to forget this, too. After being held off the score sheet in the first two games of the opening round series against the Rangers, he scored a goal in Game 3. However, he suffered a hand injury, and the Rangers won that game, 3-2. He missed the next three playoff games – the last two against New York and Game 1 against Tampa Bay. He did manage a goal over the last three games against the Lightning, but the Caps fell in a sweep.

In the end, Knuble had a solid season. Perhaps not up to his 2009-2010 numbers, but what Cap did? He is a very good fit for this team – a counterweight to the flash and dash of an Alex Ovechkin or the playmaking wizardry of a Nicklas Backstrom. He’s the anchor who can clean up messes left around the opponent’s net, and he does so without much by way of peaks and valleys in his production. Going forward, the issue will be whether the one-year, $2.0 million contract extension he signed in April will be worth the investment. He has some motivation for next season in that he is 32 games short of appearing in 1,000 games in his career, and he is 32 goals short of 300. Not out of the question, if his finish this year is an indicator that he still has gas in the tank. But his hallmark has been a consistency and a steadiness, his hard work being that yeast that helps let the top line rise.

Grade: B
Posted by The Peerless at 6:25 AM No comments: