The Peerless Prognosticator is ON THE AIR!!! -- Game 77: Hurricanes at Capitals, March 31st

Fresh off their gobsmacking of the New York Rangers at Madison Square Garden on Sunday afternoon, the Washington Capitals return home to Verizon Center to host the Carolina Hurricanes on Tuesday night.  The Caps will be looking to free themselves of the alternative wins and losses over their last five games (3-2-0) at the Hurricane’s expense, while Carolina will be looking to extend their points streak to four games (2-0-1 in their last three contests).

The three-game points streak for Carolina is a case of too little, too late. March has been a relentless journey of misfortune for the Hurricanes, who have a 4-6-4 record as they prepare for their last game of the month.  In those 14 games to date this month Carolina has been outscored by a 40-32 margin.  Their power play has the look of effectiveness – 8-for-39 (20.5 percent) – but five of those eight goals came in consecutive games against Edmonton and Columbus, teams that rank 28th and 24th in penalty killing effectiveness, respectively.  The penalty kill has had two entirely different blocks of performance in March, going 22-for-31 overall (17.0 percent), but that being broken up into a 13-for-21 block over the first eight games of the month (61.9 percent) and a 9-for-10 block over their last six games (90.0 percent).

Carolina just has not had the kind of top-end scoring they needed to compete for a playoff spot this season.  They are one of just five teams without a 50-point scorer (Arizona, Buffalo, Florida, and New Jersey are the other, all on the outside looking in on the playoffs).  The Hurricanes could have two players finish above the 50-point mark, and both could do it with big nights against the Caps.

Eric Staal sits at 49 points for Carolina through 70 games played.  Having reached his 30th birthday last October, it is time to wonder if his best days are in his rear-view mirror or if a change in scenery would rejuvenate him after what will be his sixth straight season as captain missing the playoffs.  Staal is as close as there is to an iconic player in Hurricane franchise history (those arguing for Ron Francis have a point, although he spent ten seasons in Hartford and played for Pittsburgh and Toronto in addition to the Hartford/Carolina franchise).  He is third in franchise history in games played (839), second in goals scored (310), second in points, first in hat tricks (13), first in multi-point games (179), ninth in playoff games played, first in playoff goals scored (19), first in playoff points (43), and has a Stanley Cup on his resume.

Streakiness has been a hallmark of Staal’s game this season.  He opened the season with a four-game points streak, one of six streaks of three or more games with a point this season.  He also has five streaks of three or more games without a point.  He has been hot lately with six points in his last four games (2-4-6), but a three-game points streak was snapped when he was blanked in a 2-1 overtime loss to Boston on Sunday.  Staal is 25-42-67, plus-3, in 67 career games against the Capitals.

The other Hurricane with a chance to top 50 points is defenseman Justin Faulk who, while not yet having hit that 50-point plateau, is tied for ninth overall with Calgary’s Dennis Wideman and the Rangers’ Keith Yandle in points by defensemen (47 points).  Since the 2005-2006 lockout, Faulk is one of only ten defensemen 23 or younger in his fourth season who scored 115 or more career points.  The other nine look like a Who’s Who of defensemen: Dion Phaneuf, Drew Doughty, Mike Green, Erik Karlsson, and Shea Weber among them.  This year he is tied with Green for fourth-most multi-point games by defensemen (12).  In 17 career games against Washington, Faulk is 2-6-8, plus-2, both of his goals being game-winners. 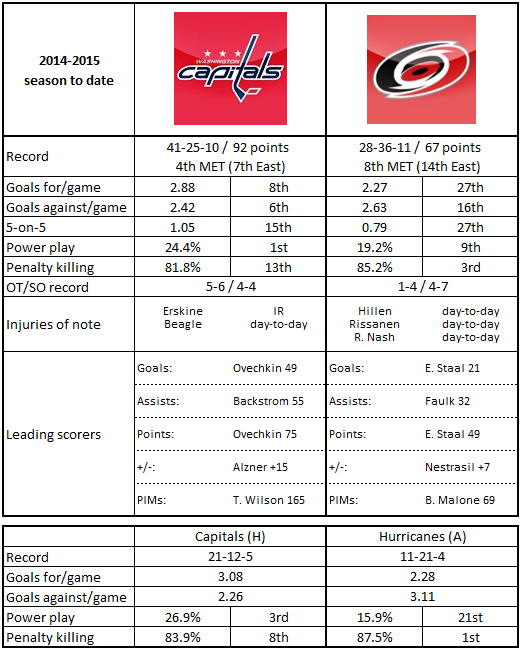 3.  The Hurricanes are dead last in the league in winning percentage in one-goal games (.324/12-14-11).  They and the Maple Leafs are the only teams to have lost more one-goal games in regulation than they have total one-goal wins.

4.  Shots are of a particular concern to Carolina.  No team has a worse winning percentage when being out-shot than the Hurricanes (.213/6-14-6).

1.  Including the game in which he was injured against the New York Rangers on March 11th, the Capitals are 5-4-0 in Jay Beagle’s absence.  Just pointing that out.

2.  The Caps have 17 players with ten or more points this season, one more than reached that mark last season.  Unless Curtis Glencross (six points) or Michael Latta (five points) has an unusual spurt over the last six games, it is unlikely they will get to 18 players hitting that ten point mark.

3.  As one might expect, Alex Ovechkin has scored more goals within his division (20) than any other player in the NHL this season within theirs.  What one might not know is that the Caps’ second-ranking intra-divisional goal scorer is Eric Fehr (11).

4.  Mike Green sure likes home cooking in one respect.  At Verizon Center, Green is plus-12.  On the road, he is merely “even.”

The Hurricanes are not getting enough out of the goaltender position.  Consider that there are 46 goalies having appeared in at least 20 games this season.  Cam Ward ranks 31st in even strength save percentage (.916), while Anton Khudobin ranks 44th (.905).  They have not been subject to the big outburst.  For example, Cam Ward has allowed four or more goals ten times this season, the same number as Pekka Rinne (although Rinne has played in 14 more games).  Khudobin has done so eight times, the same number as Henrik Lundqvist (Lundqvist has played in eight more games).  However, a 2.48 goals against average and a .908 save percentage out of the goaltending position has not been quite good enough to make the Hurricanes playoff contenders this season.

Seven games, 4-2-6, even…five games, 0-0-0, minus-2.  That is the 12-game experience of Curtis Glencross as a Washington Capital, his first seven games in the red jersey and his last five games.  Curtis Glencross recorded one shot on goal against the New York Rangers on Sunday, his first shot on goal in five games since scoring his fourth goal as a Capital on two shots in a 4-3 Gimmick win over Buffalo on March 16th.  The Caps’ record has not been appreciably different in the five game Glencross went without a point (3-2-0) from the seven in which he scored six points (4-3-0), but if the Caps are to get secondary scoring to make their final playoff push, he is likely to be an important part of it.  In seven career games against Carolina, he is 4-1-5, plus-4.

This is the last game of the season for the Caps against a team out of playoff contention.  In that sense it is a “must-win” game.  The Hurricanes have not been a cooperative opponent, however.  While Washington owns a 2-1-0 record against Carolina this season, one win came in overtime, and another was a one-goal win.  The loss was a 3-0 shutout.  Fail to take the Hurricanes seriously, and it could come back to bite the Caps.

Capitals 4 - Hurricanes 2
Posted by The Peerless at 8:12 PM No comments: