The Washington Capitals dropped the puck on their 2016-2017 season this week, and it was something of a mixed bag.  A win and a loss, some fine 5-on-5 play, less than fine play from special teams, performances you expect from some players, and performances from some players Caps fans will hope improves before too long. 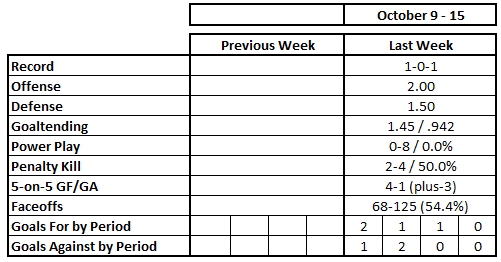 The season opened with a loss to a bitter rival who ended the Caps’ season last spring, and it was a chance to watch as that opponent raised their Stanley Cup championship banner.  The 3-2 Gimmick loss to the Pittsburgh Penguins was the Caps’ third straight regular season loss to the Pens dating back to last season, the second straight extra-time loss.  The loss broke a modest two-game winning streak in road openers (wins in Boston in 2014-2015 and in Calgary last season).

The home portion of the season got off to a better start with the Caps taking down the New York Islanders, 2-1, on Saturday.  It was the Caps second straight win in a home opener, the fourth straight home opener in which they earned points, their 3-0-1 record marred only by a 2-1 Gimmick loss to the Montreal Canadiens in 2014-2015.  The Caps’ 1-0-1 record to close Week 1 tied them with the Philadelphia Flyers for second place in the Metropolitan Division, one point behind the 2-0-0 Penguins. They were one of nine teams in the Eastern Conference to finish Week 1 without a loss in regulation.

Week 1 was an odd one in the offensive end of the week.  Two games, two goals in each, both goals in each game scored by the same player.  In the season opener, Andre Burakovsky potted both goals for the Caps, the second time in his three-year career he scored the first goal of the season for the Caps (he scored the Caps’ only goal in the 2-1 trick shot loss to Montreal to open the 2014-2015 season).  Both goals came off feeds from Nicklas Backstrom, the third time in four years Backstrom had a multi-assist game in the Caps’ season opener.

In the second game of the week it was fourth-liner Daniel Winnik getting the two-goal game for Washington.  Neither could be considered “fourth-liner” luck.  One came on a mid-air redirection of a shot from John Carlson; the other was the product of settling a bouncing puck in the neutral zone, turning Islander defenseman Travis Hamoinic inside out as he cut to the middle, deking goalie Thomas Greiss to the ice, and tucking the puck behind Greiss’ right pad for the score.  Those were first-liner quality goals.

What the Caps did not get was a point from the top line of Evgeny Kuznetsob, Alex Ovechkin, and T.J. Oshie.  The trio combined for 14 shots on goal for the week.  And their performance resulted in a bit of an odd time on ice outcome.  A certain pecking order unfolded, expected in one way, unexpected in another.  At even strength, Jay Beagle averaged 8:25, pretty much what one would expect from a fourth line center.  After that, things got a bit odd.  Lars Eller, the third-line center, led the team in average even strength ice time (16:22), and second line center Nicklas Backstrom was next at 15:08.  Top line center Evgeny Kuznetsov averaged just 14:38.  The differences were a bit more on the expected side in terms of shifts (Backstrom: 50; Kuznetsov: 47; Eller: 40; Beagle: 31).

Defense is in no small part keeping opponents’ opportunities to a minimum, and the Caps did a good job of that, given that they were facing two of the top centers in the game in the first two games.  Against Pittsburgh, with Sidney Crosby out of the lineup but Evgeni Malkin dressing, the Caps held the Pens to 30 shots on goal in 65 minutes, not bad against a club that led the league in shots on goal last season (33.2).  Malkin did have one of Pittsburgh’s goals, off a Caps turnover, but he was held to three shots.

Against the Islanders, the Caps held the visitors to 22 shots on goal, only two of them from John Tavares.  The only goal the Islanders managed in those 22 shots was one off the stick of Ryan Strome that banked in behind goalie Braden Holtby off the left skate of defenseman Brooks Orpik.

On a shot attempts basis, the Caps had a good week.  At 5-on-5 they out-attempted the Penguins and Islanders by a 95-80 margin, their 54.29 percent Corsi-for ending the week seventh-best in the league (numbers from Corsica.hockey).

Braden Holtby got both starts in Week 1, and he looked every bit the Vezina Trophy-winning goalie he was last season. It was not a case of making acrobatic, SportsCenter highlight reel saves.  It was just a matter of playing the position efficiently with position, anticipation, and angles.  It was not the saves, but rather the goals that reflected just how good a week Holtby had.  Patric Hornqvist redirected a Kris Letang shot, and Evgeni Malkin scored when he got behind the Caps defense after a turnover that left all of the Caps skaters heading the other way in the Caps’ 3-2 Gimmick loss to the Penguins.  Against the Islanders, the only goal allowed by Holtby was a redirect of the skate of teammate Brooks Orpik.  Can’t say there were any softies in there.  Holtby was also strong late.  He had a first period save percentage of .947 in the first periods for the week and a .889 save percentage in the second periods of those games.  But in the third period he was 13-for-13 for the week and turned aside both shots he saw in overtime against Pittsburgh.

If there was one area of concern, though, it was in that freestyle competition against Pittsburgh.  Holtby allowed three goals on four shots and has the worst save percentage of any of the six goaltenders having so far participated in the Gimmick.

Blech… The best you can say about the power play on Week 1 is that it could have been worse.  For instance, in three games the Chicago Blackhawks do not have a goal on 20 man advantage shots on goal.  The Caps went 0-for-9 in two games in coming up empty on eight power plays.  There was a certain “handedness” to the power play, but not one that Caps fans would find unusual.  Alex Ovechkin had three of the nine shots on goal; John Carlson had four, giving the Caps a shots profile that emphasized the top and left sides of the power play.  What they did not get was anything from the middle of the 1-3-1.  Andre Burakovsky and Dmitry Orlov had the other shots, meaning that T.J. Oshie and Justin Williams, who combined for more than 15 minutes on the power play, did not get a shot on goal from the middle.  Maybe chalk this one up to early season discombobulation, although last year the Caps were 2-for-9 in their first two games on the power play.

The special teams were no better on the other side of the ledger.  The best that could be said here was that the Caps were not forced to skate shorthanded very much, just four such situations for the week, two in each game.  And even though the Caps were just 2-for-4 for the week, both of the goals were redirections, one by Pittsburgh’s Patrick Hornqvist from the high slot and the other a Ryan Strome shot off the skate of defenseman Brooks Orpik in the Islander game.  They were not the product of whiz-bang offensive playmaking, but they were the sort of opportunistic goals that teams get – and need to have – in close games.  And, both of the goals, if you include where the puck struck Orpik, were scored from the middle, where the Caps failed on their own power plays.

Washington dominated Pittsburgh in the faceoff circle, 41 to 28, then roughly split their draws with the Isles, 27 to 29.  But the aggregate numbers are better than they look in detail.  The plus-11 in wins and losses for the week is dominated by the Caps’ performance in the neutral zone, where they were 21-for-31 (67.7 percent).  They were one over .500 in the offensive zone (26-for-50), and they were one under in the defensive zone (21-for-44).

Individually, Nicklas Backstrom had a good week overall, going 23-for-38 (60.5 percent) and was very good in the offensive (53.3 percent) and defensive (84.6 percent) zones.  Evgeny Kuznetsov took the second heist number of draws for the week (33) and finished under 50 percent (42.4), but he rehabilitated that number by breaking even in both the offensive and defensive zones.

The Caps won the first and third periods for the week, going plus-1 in both overall.  They were one under for the second period, but they finished games well, blanking the Penguins and Islanders in the third period and overtime.  The Caps scored first in both games, and if this is a trend they can establish with some regularity, they should be fine in the longer run. 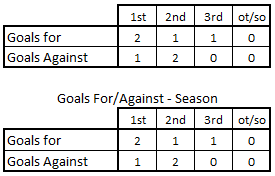 It is a measure of just how good the Caps were last season when they earned three points in two games, did not lose in regulation, and averaging 1.5 points per game is barely better than what they averaged per game last season (1.46).  Sure… two games, small population of games, etc.  The Caps showed what depth, defense, and down-roster production can do for a team, a welcome contribution in light of the difficulties the top line experienced in Week 1.