"Hit somebody!" "Hit him with yer purse, Schultz!!" "Get off the ice, Schultz!!!" It has been a continuing refrain heard at Verizon Center almost since defenseman Jeff Schultz entered the NHL. Such is the price a player pays, one supposes, for being almost precisely the same size as Chris Pronger, but not being the physical player Pronger is. It would be like a seven-footer playing 25-feet from the basket in basketball or a six-two, 220-pound running back having happy feet in football.

We all know that the plus-minus statistic is worth less than a plugged nickel, but try this on. Since the plus/minus statistic was first officially recorded in 1968, 16 different defensemen have won the Norris Trophy as the league’s best defenseman. Of those 16 defensemen, only five of them had better plus/minus number in any of their first four seasons than the plus-50 Schultz put up this season (his fourth) to lead the league. And what a who’s who that short list is:

That’s it. That’s the whole list. And the most recent of these was Paul Coffey’s plus-52 in 1983-1984, in his fourth season. It was an entirely different era of hockey.

Did Schultz have a Norris-worthy season? Is he a hall of famer in waiting? Let’s just hold off on those campaigns for the time being. What Schultz had was a very nice, very solid season. The offensive numbers certainly do not compare to a Mike Green, as his ten-game splits plainly show… 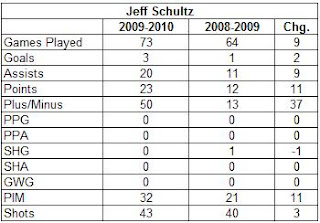 …but he did rank highly in a number of other measures. Among 152 defensemen appearing in at least 60 games and skating at 5-on-5 (numbers according to behindthenet.ca), Schultz finished:

-- second in plus/minus differential (plus/minus on and off ice per 60 minutes)
-- sixth in goals against-on ice/60 minutes
-- ahead of Drew Doughty, Dan Hamhuis, Dennis Seidenberg, Dan Boyle, and Tomas Kaberle, among others, in quality of competition faced.

But before getting all carried away here, all of this is at 5-on-5. And Schultz, having the role of being a more defensive defenseman, did not perform as well in a penalty killing role. Looking at the same sorts of rankings as at 5-on-5 for the 91 defensemen skating at least 60 games and two minutes a game on the penalty kill, Schultz finished:

-- fifth in plus/minus differential (plus/minus on and off ice per 60 minutes)
-- 45th in goals against-on ice/60 minutes.
-- behind Hamhuis, Boyle, Duncan Keith, Christian Ehrhoff, and Tyler Myers, among others, in quality of competition faced.

What he does not do, at least enough to satisfy a large contingent of Caps fans, is play a physical game. His 66 hits on the year ranked tied for 118th among defensemen in the NHL. Well, gee, guess what. He is right in the hits neighborhood of Scott Hannan (67), Erik Johnson (70), Derek Morris (65), Nick Boynton (64), and Victor Hedman (59), all rather sturdily built defensemen themselves.

Where Schultz might improve is in the area of blocking shots. His total of 129 ranked him 45th among defensemen, but you might expect more from a defenseman whose role is being more active in his own end. One might chalk this up to inexperience (Schultz still has less than 250 games of experience in the NHL), but he might use his size and frame better to block shots.

The playoffs were not especially kind to Schultz. He was on the ice for nine of the 20 goals the Canadiens scored in the series. Being on the ice for 45 percent of the goals scored by the opposition in this series is about twice the share of opponents goals he was on the ice for during the regular season (23.8). If your calling card is defense and that big plus/minus number, this is not a happy result.

Schultz is very much a work in progress. At 24, he now has 247 games on NHL experience and just completed his first playoff series that he did not have cut short due to injury. In a sense, he is the Caps defense in microcosm – young (four of next year’s top-four will start the year still under age 25: Green, Schultz, Alzner, Carlson), short on experience (those four have a combined 637 games of NHL regular season experience). But the time is arriving (read: next season) when that will cease to be a reason for lack of performance and more of an excuse.

Still, Schultz’ progress was significant this year, despite the opinions of the peanut gallery commentariat. He is never likely to be a Chris Pronger – a defenseman who seems to harbor dreams of biting the head off of an opposing forward and consuming it at center ice. But this season was a huge leap for Schultz in being effective at what the object of the exercise is – preventing goals.