We will be hobnobbing with our fellow wizards over the next few days, leaving this place dark.  In the meantime, we remind you of what inspires us... 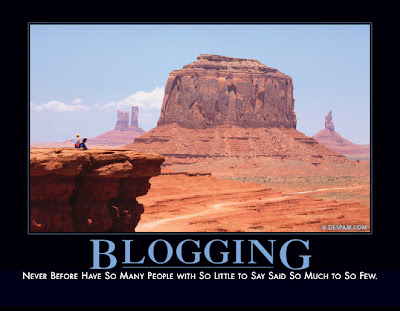 (despair.com)
Posted by The Peerless at 9:49 AM No comments:

The Washington Capitals and Bruce Boudreau shook the gorillas off their backs last night in taking a 4-3 decision from the Phoenix Coyotes. The Caps ended a four-game losing streak, and Bruce Boudreau won his 200th game behind an NHL bench on his fifth try. It did not come easy.

It looked for all the world as if this would be another one of “those” games, one in which the Caps get their chances by the bushel, but find a way to make the other goalie look like Ken Dryden, then manage to give the other guys goals on the few chances they get.

And so it was – the Caps recorded the first three shots of the game, all on a power play courtesy of Lauri Korpikoski’s tripping penalty drawn by Mathieu Perreault. But the Caps gave the Coyotes a break when John Carlson’s lazy cross-ice pass attempt at the top of the offensive zone was swiped by Radim Vrbata, who sped off down the ice. Tomas Vokoun looked entirely unprepared for what came next as Vrbata skated in, bent to his right, and flipped a forehand around Vokoun, who never seemed to move from the center of his crease. Caps fans everywhere might have been thinking, “here we go again,” especially after the Caps outshot the Coyotes 13-5 in the first period, yet found themselves down by that 1-0 score.

Caps fans then might have been found smacking their DVRs thinking they were stuck in a loop when the Coyotes’ Boyd Gordon and the Caps’ Brooks Laich both went after a loose puck near the Phoenix blue line. Gordon won the race, poking the puck out of the zone and to Korpikoski, who got behind defenseman Dennis Wideman. Korpikoski had a step of an advantage all the way down the ice, Wideman trying to hook his elbow, his arm, his knee, swipe his wallet, pull his hat over his eyes, anything to slow Korpikoski up.

All it did was give the referee a chance to call for a penalty shot when Korpikoski’s weak shot was snuffed after all the abuse. Korpikoski scored on the ensuing freebee, and Caps fans might have been tempted to tune in on the debut of “The Sidney Crosby Show.” Given that Phoenix came into the game with a record of 9-0-3 when scoring first and a record of 10-0-0 when leading after two periods, it did not look good.

But then something strange happened. Phoenix made a mistake. Defenseman Oliver Ekman-Larsson tried to send the puck up the left wing boards from his own goal line, but Joel Ward annoyed him enough in doing it that the attempt was weak. The puck settled on John Carlson’s stick, and the defenseman had time and space to tee one up. He did, the puck pinballing past goalie Jason LaBarbera to halve the lead. 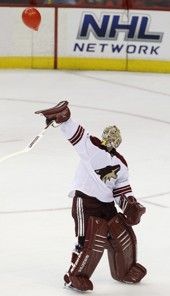 Enter “Rally Balloon.” A red balloon drifted down over the Verizon Center ice as the clock was winding down under nine minutes left in the period. It was hovering there like an angel sent to offer comfort to the boys in the red jerseys – or give them a kick in the ass. Whatever, “Rally Balloon” was there to see Cody Eakin tie the game on another drive from outside that nicked defenseman Keith Yandle on the way in, the puck bouncing under the stick of LaBarbera to tie the game. All of a sudden, the astute Caps fan would realize, “maybe there’s a chance.” For you see, Phoenix had not won a game this season when tied after two periods (okay, it was only two games, and both were lost in extra time anyway).


(photo: Ann Heisenfelt/Associated Press)
It made for an interesting third period, thanks to Nicklas Backstrrom. The centerman scored his sixth goal of the season as the end product of good work by the Caps to prevent Phoenix from clearing the puck out of the zone. The relentless pressure resulted in the puck finding its way to Backstrom’s stick at the doorstep to Labarbera’s left, where he roofed a backhand over the goalie to give the Caps their first lead. He then started a play by winning a power play faceoff – a basic play, but one the Caps have had trouble executing lately. Unable to get possession of the puck, the Coyotes were left to defend a wide-open Brooks Laich for a slap shot that found its way through a maze and past LaBarbera to put the Caps up by two.

The Caps would need that fourth goal, because Phoenix would have a breath of life left, Korpikoski getting his second of the night mid-way through the third period. But the Caps had enough grit left to keep Phoenix from any more mischief, and the losing streak was over.

-- The 4:02 sequence in the second period following the Coyotes’ second goal might be just another few minutes of a long season, or it might be the turning point of this one. Given the circumstances – the Caps on a losing streak, having fallen behind by two goals, playing a team that knows how to play with a lead – the competitive part of the game might have been thought to be over. But John Carlson scored 53 seconds after that second Phoenix goal, and Cody Eakin scored 3:09 later. In between, however, there was Tomas Vokoun foiling a breakaway by Radim Vrbata – the player who scored on a penalty shot earlier in the game. It might have been Vokoun’s biggest save of the season.

-- On the Caps’ fourth goal, Nicklas Backstrom made something out of the tools he had available. In this case, his foot. On the face-off starting the play, Backstrom had his stick tied up by Martin Hanzal, but he managed to kick the puck back to the point to get things started and from where Brooks Laich would finish them with a goal. If the Redskins had that foot on Sunday in overtime, they might have beaten the Cowboys.

-- Alex Ovechkin recorded an assist on Backstrom’s goal, ending a four-game streak without a point. Thus, he avoided setting a career high for consecutive games without a point.

-- Dmitry Orlov finished his NHL debut with a decent performance. He skated just under 12 minutes (with Karl Alzner as his chaperone), had three hits and a blocked shot. But he got lost in front of his own net on the Korpikoski goal to get the Coyotes back within one, and he did not see the ice again.

-- The Caps knuckled down on defense after that third goal. They allowed Phoenix only two shots on goal in the last 8:32 of the game.

-- If the Caps have stopped the slide for the moment, we still wonder about Ovechkin. One shot on goal in 18 minutes of ice time, none in the last 34 minutes of the game. It’s one thing to add defense to become a better two-way forward, but at the moment he is more of a “no-way” forward. It’s like watching a hitter in baseball or a golfer whose swings are a mess. Right now, Ovechkin’s offensive game is a mess.

-- Troy Brouwer didn’t have a point, but he did what he’s out there to do. Six hits, and he set an effective screen on the Laich goal.

-- Matt Hendricks…ten minutes, three hits, two shots on goal, and a fight. No one on the team pays a bigger price to earn his pay check.

-- What goes up…stays up? Cody Eakin’s goal gives him points in four of his nine games, andhe is a plus-5, despite playing more than a dozen minutes in only two of them.  Getting hard to send him back down to Hershey.

-- Strictly speaking, the Caps allowed two shorthanded goals. And no, it is not a record. The Caps have allowed three shorties in a game three times, but none since allowing three to Los Angeles in a 7-4 win over the Kings on January 10, 1992.

-- Paul Bissonnette…seven shifts, five minutes, one hit. Not much to tweet about.

-- Boyd Gordon being Boyd Gordon…he won six of eight draws in the defensive zone. But he was on the bench, having already skated the first 1:06 of a penalty kill, when Martin Hanzal lost a draw to Nicklas Backstrom that ended up being the Caps’ fourth goal. 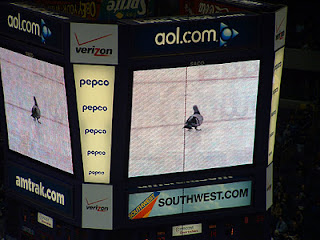 -- Once upon a time, the Caps had “Rally Pigeon.” Well, now they have “Rally Balloon.”

In the end, it is one game, and that having been drowned out by other events taking place around the league. But when all is said and done, this could have been a game that the Caps mailed in after falling behind after giving up a shorthanded goal and a penalty shot. They didn’t. They demonstrated a character they have displayed often in the past – an ability to come back after falling behind in games.

It doesn’t instantly make the Caps the 7-0-0 juggernaut that they were to start the season. They allowed Phoenix too many chances, and the big guns still aren’t firing true on a reliable basis (and that’s hard for one of them – Alexander Semin – to do from the press box). But it is another step on the road – the 19th of 82, in fact – on the way to preparing for the playoffs. It was a good start to the week.
Posted by The Peerless at 7:15 AM 1 comment: