The Peerless Prognosticator is ON THE AIR!!! -- Caps vs. Hurricanes, March 14th

The Caps are back home after a short, but profitable, two game spin on the road. Four points earned was just the tonic for the team after a lackluster home stand. But now, the Caps get to slam a nail into the coffin of the Carolina Hurricanes’ faint hopes of overtaking the Caps to win the South—

What is it Cheerless?

“It says here in the noozpaper that there’s a Car-Wash at Verizon Center t’nite.”

No, not “Car-Wash”…Carolina-Washington…the hockey game.

They’re not warsh…washing cars. It’s Carolina and Washington…those are the teams playing tonight.

“Are they playin’ in a car warsh?”

NO!...Listen, they are playing hockey…in a hockey rink. It’s a hockey game.

“Well, are they warshin’ cars after the game?”

--tap-tap-tap--… no, they are not washing cars after the game. They’re going to come, play hockey, and go home.

“Can fans warsh their cars whilst they’re playin’ hockey?”

"Why can’t they warsh their cars? They’re takin’ Metro instead o’ drivin’? "

"Gee, cuz…why would they do that? Metro sucks."

Well, hopefully the Caps won’t suck as they face a familiar foe at home. The Hurricanes come into Verizon Center as something of an unknown, though. After starting March with a bang – winning their first four games by a combined 23-6 score (including a 5-2 thwapping of the Caps), the Hurricanes have lost their last two, a 3-2 Gimmick loss to Chicago and a 3-2 loss to Dallas. Both were on the road.

On the other hand, while Carolina comes into this game 2-2-0 against the Caps this year, their wins have come in the last two contests played between the teams. Overall, they have put themselves in a position to challenge, if not realistically for the Southeast Division title, then for a playoff spot. Their overall numbers are pretty respectable: 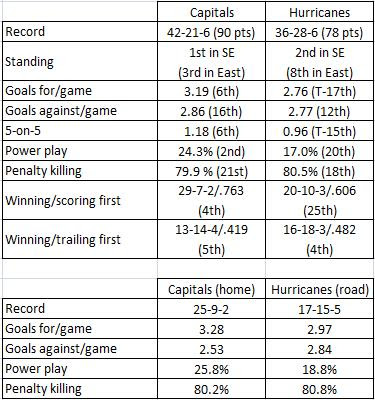 While they do not have the top-end offensive firepower that the Caps bring, the Hurricanes do have balance. They have 18 players with at least ten points (the Caps have 16), and nine players with at least ten goals (the Caps have ten). And, their special teams have been very good lately. The power play has registered at least one goal in seven straight games (10-for-35, 28.6 percent). Meanwhile, their penalty killers have skated off 25 of 28 shorthanded situations (89.3 percent) over the same span of games.

Even Rod Brind’Amour, who seemed to be on a path to what would arguably be the worst season of his career (projecting to fewer than 50 points and a plus-minus past -30), seems to have turned things around. He is 4-3-7, +4, in six games in March. That plus-4 has dragged his season mark to -26, which still leaves him safely tucked into 855th place among 856 players in the NHL (only Brendan Witt has a worse number, -32). And, he’s been something of a Cap killer in his career with eight game-winning goals among the 38 he’s scored in 95 games.

Carolina has four defensemen with at least 20 points this year (the Caps have one). Joe Corvo, Joni Pitkanen, Dennis Seidenberg, and Anton Babchuk have combined for 32 goals scored from the blue line (the Caps, as a group, have 36). Perhaps fortunately for the Caps, this quartet has a total of two goals scored against the Caps in a combined 58 career games. None of them have scored against the Caps this year. If there is a big bopper in the defenseman squad, it would be Tim Gleason, who ranks 15th in the league in hits among defensemen. Seidenberg can lay the lumber from time to time as well (he’s 26th).

In 63 games with the Edmonton Oilers, Cole was a disappointment – 16-11-27, -3. Since returning to Carolina at the trading deadline, he is 1-5-6, +1, in five games, including a four-assist effort against Tampa Bay on March 7th. Caps fans might like to think the bloom is off the rose, though, since Cole is scoreless in his last two outings (perhaps not coincidentally, both losses). Cole and Staal seem to have a chemistry that carries over from their first marriage, before Cole was sent to Edmonton (for Pitkanen, it turns out). Cole is the sort of power forward that has given the Caps problems from time to time this year – he had a hat trick against the Caps when the Oilers visited in January.

Kozlov has struggled with injury and performance in the 2009 portion of the season. Since January 1st, he is 2-6-8, even, in 21 games. He doesn’t have a goal since January 31st (nine games). After finishing last season at plus-28, Kozlov stands at minus-6 for this season, tied for last on the team. The Caps have depended on the graces of the Alexes and Nicklas Backstrom a little too much lately among the forwards. The Caps are going to need others to step up. Much has been made over the lack of secondary scoring and the lack of contributions from the bottom half of the forward lines, but getting some more production on the score sheet from Kozlov would help, too. This might not seem like the team to start that trend with, since Kozlov is only 7-18-25, -2, in 48 career games against the Hurricanes, and he is scoreless (with a minus-4) in four games this year against Carolina. On the other hand, he’s due.

Carolina is playing its sixth game in the past nine days. It is, as coach Paul Maurice calls it, “about as tough as you can get in the NHL.” It is the Caps’ job to make things even tougher. Get on them early, get on them aggressively, and get them thinking thoughts of their plane flight home.