The Washington Capitals went into their Saturday night contest against the Toronto Maple Leafs riding a five-game winning streak, their longest since opening the 2011-2012 season with a seven-game winning streak.  Meanwhile, the Maple Leafs arrived in Washington for their second and final visit of the 2012-2013 season with a 7-2-1 record, one of their losses in regulation coming at the hands of the Caps on October 17th by a 4-2 margin.

The teams started slowly, looking like a pair of prize-fighters feeling each other out.  It was not surprising to see Toronto open that way; they were fresh off a win over New Jersey on Friday night.  The Caps, though, looked sluggish despite their coming in on a run.  Toronto had the better of the chances early, getting a power play opportunity when defenseman Jack Hillen was sent off for interference.  Goalie Michal Neuvirth stood tall in the face of good pressure from the Leafs keeping the puck in the offensive zone for almost the full two minutes.

Toronto had an excellent scoring opportunity in the eighth minute when Nikolai Kulemin and Joffrey Lupul skated in on a 2-on-1 break.  Neuvirth turned away a redirect attempt by Lupul to keep the game scoreless.

The Caps got a chance in the late stages of the first period when Mikhail Grabovski was whistled for tripping.  It took the Caps barely 20 seconds to convert the chance when Mike Green converted a pass from Nicklas Backstrom into a snap shot that beat goaltender James Reimer over his glove.  That was the only scoring of the opening period, the Caps enjoying a 9-8 edge in shots on goal.

The Caps extended their lead early in the second period as a product of hard work behind the Toronto net. Joel Ward and Jay Beagle pinned defensemen John-Michael Liles and Carl Gunnarsson behind Reimers, not allowing either defenseman room to find a teammate up the wall.  Ward poked the puck free from under Beagle and Gunnarsson from behind the net to Reimer’s right.  The puck slid out to Joey Crabb at the post, and Crabb wasted no time stuffing the puck through Reimer’s skates.

Toronto got that goal back later in the period just after a penalty to Mike Green expired.  With the Caps unable to clear the puck, even back at full-strength, Liles gloved a puck down for the Leafs and fired a shot at Neuvirth.  Unable to control the rebound, Lupul and Kulemin each got whacks at the puck with Kulemin sliding the puck under Neuvirth to bring the Leafs back within one at 2-1.

The Capitals would get a power play opportunity of their own late in the second period when Dion Phaneuf was sent off for cross-checking.  They could not take advantage of the opportunity, though, and were fortunate not to have ended the period tied.  David Steckel intercepted a cross-ice pass and found himself with nothing but open ice ahead just before time expired for the second period.  Steckel was not quick enough to give himself a better shooting opportunity before the horn sounded, and his shot from just inside the blue line was turned away by Neuvirth as the clock hit zero.

Washington had a chance to put the game away early in the third period after James van Riemsdyk was penalized for boarding Jack Hillen.  Once more, however, the Caps could not convert the power play chance, going the entire two minutes without registering a shot on Reimer.

The Caps caught a break, though, just past the mid-way point of the period.  Mathieu Perreault attempted a shot from a severe angle to Reimer’s left.  Reimer got the blade of his stick on the puck, but it deflected up and away from him.  It struck Matt Hendricks in the arm as he was fighting for position in front with Gunnarsson.  The puck tumbled over the goal line for an apparent goal, but the referees went to video review to confirm that Hendricks did not punch the puck in.  After a brief stoppage, the on-ice call of a goal was confirmed, and the Caps had their two-goal lead back.

Toronto was unable to muster much offense after that, perhaps a combination of their second game in two nights and the Caps going into a defensive shell.  The Leafs were pressed into taking chances late, and were burned when John Carlson intercepted an exit pass and fed Troy Brouwer, who deked Reimer to the ice before stuffing the puck around him to give the Caps a 4-1 lead at 18:33.  That would end the scoring, the Caps skating off with their sixth straight win and tenth of the season.

Notes:  With the win, Michal Neuvirth recorded his 10th win in 13 appearances, his quickest to ten wins in his career; he had ten wins in his first 15 appearances in 2010-2011… Alex Ovechkin recorded an assist but does not have a goal in five games since recording two against Pittsburgh on October 31st… With his assist in the second period Jay Beagle recorded a point in consecutive games for the first time in his career. 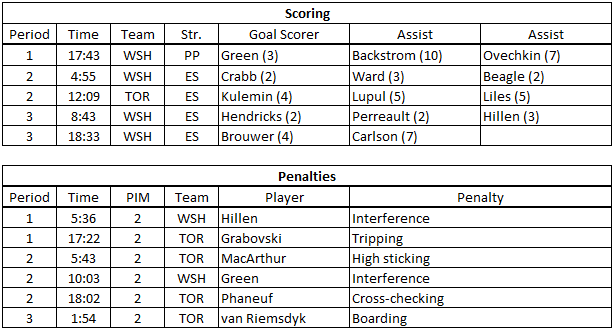 Posted by The Peerless at 12:36 AM No comments: