The Peerless Prognosticator is ON THE AIR!!! -- Game 18: Oilers at Capitals, November 12th

The Washington Capitals wrap up their first two-game home stand of the season on Sunday when they host the Edmonton Oilers at Capital One Arena.  The Caps are coming off one of their best outings of the season – arguably their best home game so far – in defeating the Pittsburgh Penguins, 4-1, on Friday night.  The Oilers are coming to Washington for the last stop on a four-game road trip.  They won their first two contests, both in overtime, and face the New York Rangers on Saturday afternoon before arriving in Washington.

Those wins look like the start of a turnaround for the Oilers, who have won three of their last five games after going 3-7-1 to start the season.  The two overtime wins over the New York Islanders and the New Jersey Devils were the first consecutive wins posted by Edmonton so far this season.  In fact, the road has been relatively kind to the Oilers so far, Edmonton going 3-3-1 after their 4-2 loss to the New York Rangers on Saturday afternoon.

As one might expect, Connor McDavid leads the Oilers in goals scored on the road this season (four) and points (six), and his plus-1 is best on the team on the road.  McDavid has been something of a road warrior over last season and this, leading the league in road points scored (53, pending Saturday results).  Not that McDavid discriminates much between home and road games when practicing his trade.  He has points in 13 of 16 games.  Those games would appear to matter; Edmonton has no wins among the three games in which he failed to record a point so far this season.  If there is an odd feature to his scoring this season, it is that he had a hat trick in the season opener, all of the goals in a 3-0 win over the Calgary Flames, but he has only four goals in 15 games since then.  In four career games against the Caps, McDavid is 1-5-6, minus-2.  That includes an assist in the Oilers’ 5-2 loss to the Caps on October 28th in Edmonton.

Ryan Nugent-Hopkins is the other number one overall draft pick still on the Edmonton roster and is second to McDavid on the club in points (12, tied with Leon Draisaitl) and goals (six).  Nugent-Hopkins has been a solid, if unspectacular contributor in his seven seasons in Edmonton, averaging 20 goals per 82 games over his career and 55 points.  What he has not been is an elite scorer, never having hit the 60-point mark in any season and topping 20 goals just once, that coming in the 2014-2015 season when he had 24 goals.  He has been on something of a roll of late, going 4-5-9, plus-2, in his last eight games.  And perhaps it is starting to show up in his road performance.  Nugent-Hopkins recorded a goal in the Oilers’ first road game of the season, a 3-2 loss to Vancouver on October 7th, after which he went five straight games without a point on the road. But he has three assists in his last two road contests heading into the game against Washington.  He is 3-6-9, minus-7, in 10 career games against the Capitals.

Last season, no goaltender appeared in more games than Cam Talbot.  His 73 appearances was several lengths ahead of Toronto’s Frederik Andersen’s 66 appearances, making him the 12th goalie since the 2004-2005 lockout to appear in more than 70 games in a season.  He is right there again among the league leaders in appearances, having dressed for 15 of the Oilers’ 16 games to date, second in the league to Andersen’s 16 appearances.  It has not been the best of starts for Talbot, though.  His .912 save percentage is, at this early stage of the season, his worst in his five NHL seasons.  Ditto for his 2.91 goals against average, more than half a goal worse than that which he posted last season (2.39) when he finished fourth in the voting for the Vezina Trophy as the league’s top goaltender.  What he has been on the road is unlucky.  Despite a 2.16 goals against average and a .933 save percentage in seven road appearances, he is 3-3-1.  Talbot is 2-4-0, 2.51, .917 in seven career appearances against the Caps. 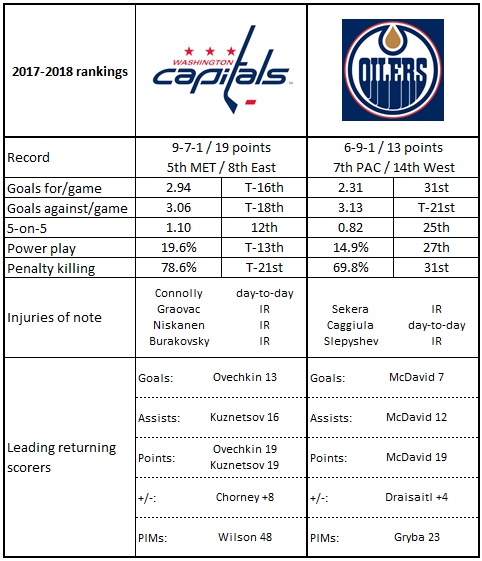 2.  There might not be any more disappointing – or less efficient – team on offense than the Oilers, who despite all the shots and attempts are dead last in scoring offense (2.31), and a lot of the problem is the power play.  Their three goals with the man advantage is more than just four other teams.

3.  The Oilers are the only team in the league to have scored fewer than 15 goals in each of the three regulation periods this season.  They have ten first period goals (fourth worst in the league) and 12 in each of the second and third periods of games.  That they are tied for the league lead in overtime goals scored this season (three) is what is keeping them at least in shouting distance of a playoff spot (five points behind Calgary for the second wild card spot in the West).

5.  One thing the Oilers have done so far is hit.  They lead the league in credited hits (485), almost six percent more than the Arizona Coyotes (459).

1.  The Caps might be emerging from their early season slump at home.  With the 4-1 win over the Pittsburgh Penguins on Friday night, the Caps have three straight wins on home ice after losing three in a row.

2.  Washington has scored the same number of goals in each of the three regulation periods this season, 16 in each of the first, second, and third periods.

4.  On the other side, the Caps shut out the Penguins on four power play chances, making it the first time this season that the Caps held an opponent without a power play goal in consecutive games on home ice.

5.  The penalty kill might still need work, though, specifically the need to avoid doing so late in games.  No team has spent more third period time killing penalties than the Caps (49:36), and it’s not close.  The New Jersey Devils are second with 37:04 in third period penalty killing time.

You will find few 30-year old players in the NHL with as many miles on his resume as defenseman Kris Russell.  A third-round draft pick of the Columbus Blue Jackets in 2005, Russell skated five seasons with the Blue Jackets before being traded to the St. Louis Blues for Nikita Nikitin in a swap of defensemen in November 2011.  He spent the remainder of the 2011-2012 season and the next season with the Blues before being traded to the Calgary Flames for a fifth-round draft pick.  After a two seasons and change with the Flames, he was sent to the Dallas Stars for Jyrki Jokipakka, Brett Pollock, and a second-round draft pick in a trading deadline deal.  At the end of the 2015-2016 season, Russell became an unrestricted free agent and signed with the Oilers in October 2016.  He skated 68 games with the Oilers last season, going 1-12-13, minus-5.

Russell, despite not being among the biggest of NHL defensemen (5’10”/173 pounds) is capable of logging big minutes.  In his ten seasons before this one he averaged more than 20 minutes a game four times, more than 23 minutes a game in three of them.  His ice time is down quite a bit from last season, though, almost four fewer minutes per game (21:13 last season versus 17:25 this season.  In 15 career games against Washington, Russell is 1-3-4, plus-10.

If you are not a big offensive contributor, you have to earn a check in the NHL contributing in other ways.  In one respect, Jay Beagle is an elite player.  Of 160 players in the NHL having taken at least 50 faceoffs, Beagle ranks second in winning percentage (62.5 percent), trailing only Anaheim’s Antoine Vermette (63.8 percent).  No player having taken at least 20 shorthanded draws has won a larger share (67.2 percent).  He has been amazing on home ice, winning 68 of 91 draws (74.7 percent) and not being below 64 percent in any home game so far.  And, he kills penalties.  His 3:21 in shorthanded ice time per game is fourth among 352 forwards having appeared in at least ten games so far.

The Oilers have not won a game on the road in regulation time this season, all three of their wins coming in overtime.  And, they are in the last of a four-game road trip, playing their third game in four days.  It is a team and situation of which the Caps should take advantage.  It puts a premium on putting the Oilers on their heels early, to try and shorten the competitive portion of the game.  A win here would be a nice springboard as the Caps head out after facing Edmonton on a two-game trip against Western Conference opponents.  And it would enable the Caps to do some more leap-frogging in the ridiculously crowded Metropolitan Division standings.

Posted by The Peerless at 9:35 PM No comments: