Capitals vs. Rangers: Exception to the Rule and the Analogy of the Saints 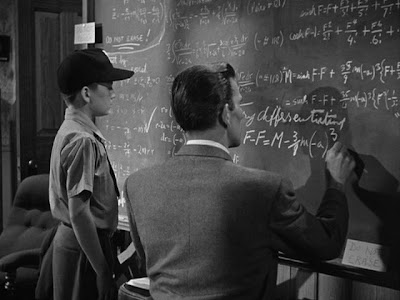 A lot of folks spend a lot of time and apply their hard-won expertise in the empirical sciences to try to apply mathematical rules and statistical measures to hockey in an effort to explain what happens on the ice.  Some of the new fangled measures confirm what the casual fan might intuit by sight. For instance, a fan only recently acquainted with the game, but who might follow football, assumes intutively that just as in football, having the puck beats not having the puck as an ingredient to success.

But these empirical rules, methods, and measures are not (not yet, anyway) sophisticated enough to predict with virtual certainty a result or an aoutcome.  The same holds true in any team sport where any number of variables might affect an outcome that are not included in the observer's model.

And so it is with possession.  The New York Rangers are thought to be the superior "posession" team, while the Washington Capitals have had issues with this metric for much of the season.  All other things being equal, the Rangers' superior ability to control territory by virtue of possessing the puck should result in wins more often than not, especially against a team such as the Capitals, a team that is somewhat lacking as a "possession" team.

The imperfection in the measure leads us to an analogy in a different sport -- professional football.  If one looks at the team statistics tables for the 2012 season under "time of possession," one will find that the New Orleans Saints finished a modest 27th in the NFL, ahead of only five other teams.  But, lo and behold, there are those same Saints finishing third in the league in points per game.  The lack of possession did not seem to impair unduly their ability to wreak havoc on opposing defenses.

How is this so for a team with such weak possession statistics?  Possession is merely a variable in what could be a larger set of variables in a model to explain an outcome, the "how" that outcome was achieved.  Some of those variables have had measures identified with them by those adept in the mathematical and statistical sciences looking at football or hockey, some no doubt have not.  How, for instance, does one accommodate the particular skill of a Drew Brees in the model?  Or his bevy of receivers?  How do you accommodate the skill of an Alex Ovechkin or a Nicklas Backstrom?  Or (given his unique contributions against the New York Rangers) a Jason Chimera?  How do you account for the philosophy, preparation, and game planning of the coaching staff on a game-to-game basis?

How do we model the opportunistic effects of "skill" on an outcome as opposed to the methodical effects of "possession?"

There will be instances in which the results do not confirm what relying on a single measure or a small set of measures shows us should occur.  Some results will fall through the cracks (generically categorized as "error"), and others will reflect an entirely different set of variables that are important in explaining the results we see on the field or on the ice.  That is a challenge for the numbers mavens, defining and developing broader models that capture the discrete variables that best explain a result, whether they include "possession" measures or some variable or measure that explains the "Analogy of the Saints."

New York Rangers head coach John Tortorella is an entertaining quote (unless you happen to be a working journalist), and from time to time in this series, we will try and assemble the most "entertaining" of them from a variety of media sources.  After Game 1, Tortorella was rather subdued, although you could almost see the thought bubbles over his head in the post-game press conference after the Caps 3-1 win last night (images from screen capture of MSG Network clips)... 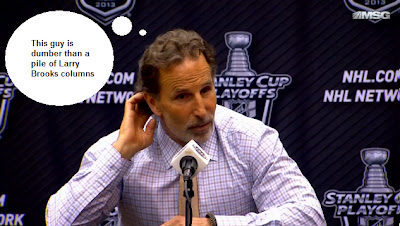 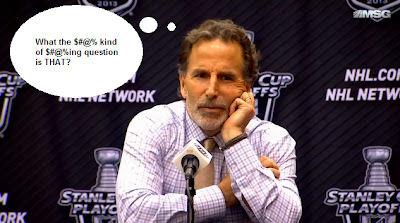 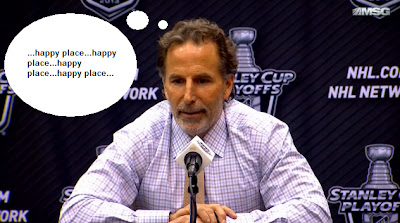 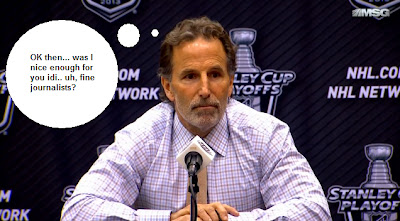 As for the best of the quotes themselves...


“Are you asking me ‘do we want to move away from him to allow the shots to get through?’…No.  I don’t know what you’re talking about, but no.”

-- In response to a question about a quote from Caps’ goalie Braden Holtby that there was a lot traffic in front of him.

"You [can’t] go back to back with those.  I’m not so sure [Arron Asham’s] was a penalty; they call it though. We can't take that many penalties…You can't take two in a row. Hopefully, we will discipline ourselves the next game."
-- On a question about the Rangers’ penalty killing.

Posted by The Peerless at 8:01 AM No comments: