The Peerless Prognosticator is ON THE AIR!!! -- Game 26: Red Wings at Capitals, December 8th

The Washington Capitals return from their three-game road swing on Tuesday night to host the Detroit Red Wings in the Caps’ first home game of December and the last meeting of these two teams for the regular season.

The Capitals finished their road trip with a successful 2-0-1 record, lifting their Metropolitan Division-best road record to 8-2-1.  The Caps are already one of three Metro teams with ten or more home wins this season, and one of four in the East with a record of 10-3-1.

Meanwhile, Detroit has yet to lose a game in December (3-0-0), and the Red Wings have points in their last ten contests (7-0-3).  The recent run has lifted the Wings into second place in the Atlantic Division, behind the Montreal Canadiens, and has them sitting fifth in the Eastern Conference standings.

The Caps are one of the points victims in the Red Wings’ recent run of success, Washington defeating Detroit in overtime on November 18th by a 2-1 score.  The Caps will be looking to win the season series outright with a win on Tuesday night.

Since these teams last met, Detroit has outscored opponents by a 28-22 margin, posting a 6-0-2 record along the way.  Their special teams have not been particularly special over that span, the power play going 5-for-27 (18.5 percent) and the penalty killers going 20-for-26 (76.9 percent).

Individually, it has been Tomas Tatar leading the way over the last eight games with five goals (tied with Dylan Larkin) and nine points.  Tatar, who had a breakthrough year last season with 29 goals in playing all 82 games, is on a pace to finish in the same neighborhood this season (30 goal pace).  He has been consistent with last year’s performance in other areas as well.  His six power play points through 27 games (4-2-6) is on a similar pace with that he set last season – 19 points in 82 games (9-10-19).  He has been hot since Hallowe’en.  In 17 games since then he is 8-8-16, plus-4, and is shooting at a better than 17 percent rate (8-for-46).  Tatar is 1-3-4, plus-3, in eight career games against the Capitals.

Dylan Larkin is tied with Tatar for the team lead in goals (five) in the Wings’ 6-0-2 run since last facing the Caps and is on his way to a big rookie season.  He ranks third among all rookies in points (21, behind Arizona’s Max Domi and Chicago’s Artemi Panarin), and he leads all rookies in goals (11).  His plus-minus has almost lapped the rookie field (plus-19, far ahead of St. Louis’ Colton Parayko at plus-11), and he is tied for the league rookie lead in game winning goals with three.  Larkin has a goal and is a plus-1 in the two games played against the Caps this season. 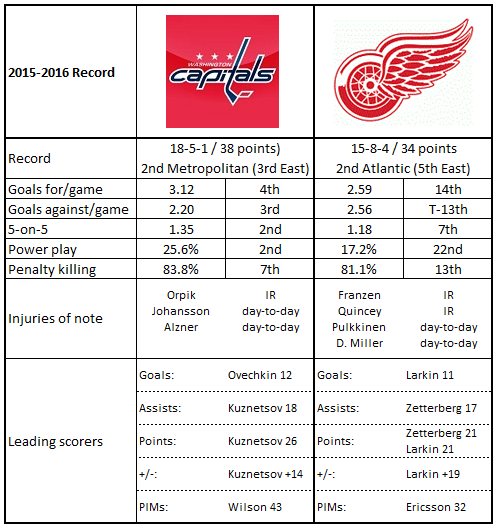 1.  Detroit is generally thought of as a “mature” team (ok, “old”), but of the 25 skaters to dress for the club this season, seven have yet to reach their 25th birthday, and Tomas Tatar just celebrated his on December 1st.  Two of them – Tatar and Dylan Larkin – are tied for the team lead in points (21).  Larkin leads the team in goals (11), while Tatar is tied for second (10, with Gustav Nyquist).

2.  Despite the fact that Detroit has five defensemen with five or more points and seven with goals on their resume this season, they do not have a top-end shooter.  Only one defenseman – Mike Green – ranks in the top 75 defensemen in shots on goal (tied for 75th with 35).

3.  Detroit scores first, often.  In 27 games they have recorded the first goal 19 times, tops in the league.  Their 14 wins when scoring first is tied for the league lead with Montreal and the New York Rangers.

4.  Conversely, and owning to the infrequency of occurrence, no team has fewer wins when allowing the first goal than Detroit (once in eight games).

5.  The Red Wings are largely a middle of the road team, or slightly higher, in possession. They rank 12th in Corsi-for percentage at 5-on-5 overall (50.7), 11th in score-adjusted Corsi-for (51.6), and 11th in close score situations (50.6).  It is worth noting, though, that in eight games since they last faced Washington, their score-adjusted Corsi-for is 56.5 (numbers from war-on-ice.com).

1.  The Caps have spread power play scoring around rather well.  Nine Caps have recorded at least one power play goal through 25 games, and 12 have points.  The shooting is another matter.  While Alex Ovechkin has been held largely in check in terms of points, his 45 shots on goal with the man advantage exceeds the total of the next three Caps in line (42 from John Carlson, T.J. Oshie, and Evgeny Kuznetsov).

4.  If you subscribe to the notion that “blocked shots” is a negative indicator (one that reflects the other team having the puck), you would be happy to know that the Caps have the sixth fewest blocked shots in the league (334).

5.  While the Red Wings have been scaling up their possession numbers since the last played the Caps, Washington has had issues.  Their score-adjusted Corsi-for percentage at 5-on-5 over their last eight games is just 50.3, well below their season number of 53.0 (numbers from war-on-ice.com).

Evgeny Kuznetsov does not have a point in his last three games.  That might sound like a lot, but over his first 22 games he did not go consecutive games without a point.  He was much more into the flow of things in the Caps’ 2-1 overtime loss to Winnipeg on Saturday afternoon, posting six shots on goal after posting a total of six in his previous four games combined.  Maybe it was a Canadian thing.  Since he went 3-2-5 in a 7-4 win over Edmonton last October 23rd, Kuznetsov went without a point in five of seven games against Canadian teams and was 1-3-4 overall.  In his last five games against American teams he is 2-6-8 with a game-winning goal, that one coming overtime against the Red Wings on November 18th in a 2-1 win.  Kuznetsov is 3-0-3, plus-1, in five career games against Detroit.

It seems odd in Game 26 to say that the season series between these clubs is coming to an end with this game, but the NHL schedule-maker acts in mysterious ways.  The Caps have been a good home club since the first of November, going 6-1-1 and winning their last four in a row, three of them by multi-goal margins.

On the other hand, what jumps off the page on the Detroit side is the number of extra time games.  Eight of their last ten games have been settled in overtime or the Gimmick, the Red Wings winning five of them, two of them on the road.

The Caps had their fill of Joe Louis Arena, splitting a pair of one-goal decisions (one, of course, in extra time).  On home ice, the results are going to be a bit different.