The Peerless Prognosticator is ON THE AIR!!! -- Game 66: Hurricanes at Capitals, March 6th

The Washington Capitals punch their time cards and take their lunch buckets to the ice once more, this time to host their Southeast Division rivals, the Carolina Hurricanes, in the sixth and last game of their season series. The Caps are looking for their first win in March after a 6-7-1 February. The lackluster performance of the last five weeks has left the Caps outside the playoff-eligible group in the Eastern Conference, and it has given the Hurricanes an opportunity to close the distance between themselves and the Caps.

Unfortunately for the Hurricanes, they have themselves been victims of some uninspired play over the last five weeks. They have won only six of 13 games since February 1st, but they have done one thing the Caps have not – earned The Bettman Point. Carolina has seven losses since February 1st to go with those six wins, but in five of them they earned a point – three with overtime losses and two in the Gimmick.

The result is that the Hurricanes have more extra time losses than any team in the league – 14 – but those are 14 points in the standings for the Hurricanes. If the Caps had as many extra time losses instead of regulation losses, they would be four points ahead of Florida instead of scrambling for a playoff spot.  Carolina, despite sitting in 14th place in the conference, has fewer regulation losses (27) than do the ninth-place Capitals (28).

Carolina has four losses in their last five games, three of them coming in extra time, two in a Gimmick. Although they have a respectable 13 goals in those five games (2.6 per game), the Hurricanes have only nine at even strength. The flip side of that is that Carolina is 4-for-15 on the power play (26.7 percent). This could spell trouble for a team such as the Capitals that is 31-for-40 (77.5 percent) in penalty killing over their last 12 games. Here is how the clubs compare in their numbers: 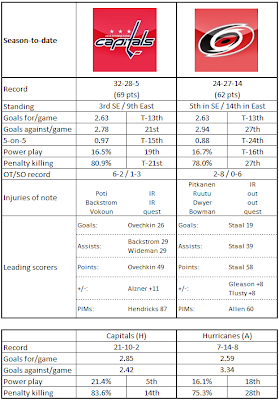 1. The last time Cam Ward faced the Caps, he pitched a shutout (3-0 on January 20th). If he pitches one in this game, he will tie the franchise record for shutouts, held by former Caps goaltending coach Arturs Irbe (20). It might not be the way to bet, though. Ward has allowed three or more goals in each of his last seven appearances (2-1-3, 3.39, .884).

2. The other Hurricane goalie who pitched a shutout the last time he faced the Caps – Justin Peters – has not won since he blanked the Caps. Then again, he appeared in only two games. As might be typical, given the Hurricanes’ performance over the last few weeks, both decisions ended in a Gimmick, Peters coming out on the losing side of the decision each time.

3. Brian Boucher might be coming back into the Carolina lineup as Ward’s backup. He was the backup to Ward in Carolina’s 4-3 overtime loss to Tampa Bay on Saturday, and coach Kirk Muller said last Friday that with the Hurricanes having a pair of back-to-backs coming up (they go to Buffalo on Wednesday, then have a Tampa Bay/Florida back to back on the weekend), “that's more than likely where you will see [Boucher] jump in.” He does not have a win this season (0-4-1) and has not appeared in a game since December 3rd.

4. The Hurricanes are lousy finishers. They have allowed the second highest total of third period goals (79, Columbus has allowed 80) and the highest number of overtime goals (eight). On top of that, they have not yet won in the trick shot competition this season.

5. Only two teams in the league – Pittsburgh and New Jersey – have scored more shorthanded goals on the road than the five tallied by Carolina so far this season. Something to note, given that the Caps have allowed five shorthanded goals in their last 20 games, two of them to the Hurricanes.

1. The Caps out-shot the Hurricanes by a combined 68-56 in their first two contests this season and won them both (by 4-3 in overtime and by a 5-1 margin). In the last three games Carolina has turned the tables, outshooting the Caps by a 117-64 margin, and are 2-1-0 in those games, their loss coming when Tomas Vokoun stopped 43 of 44 shots in 2-1 win in January.

2. OK, who leads the Caps in points against the Hurricanes this season? Did you say “Alex Ovechkin?” You win (ok, he’s tied with Nicklas Backstrom). But he does not have a goal in doing it (four assists). The four points is tied for the most he has against any opponent this season. Last season he had more than four points against six opponents (with a high of ten against Tampa Bay).

4. Seventeen different Capitals have goals at home this season. It might surprise you – then again, it might not – that the three players who have played at least 25 games at home and have no goals are Karl Alzner, Matt Hendricks, and Mike Knuble. Who leads the Caps in home goals? Troy Brouwer (13).

5. Washington is one of only three teams in the league without a player with as many as 30 assists (Minnesota and the Rangers being the others). Nicklas Backstrom, who has missed the last 27 games, is still tied for the team lead with 29 assists, with defenseman Dennis Wideman. Alexander Semin is next among forwards with 24 helpers.

Jeff Skinner comes into this game having just had a three-game points streak stopped. However, Skinner has six goals in 13 Southeast Division games this season. None of them have come against the Caps. In fact, he has only one in 11 career games against Washington. Oddly enough, of the four points he has against the Caps so far this season (all assists), none have come in a Carolina win.

Part of the Caps having the guys step up who need to step up is having them take advantage of history. Alexander Semin has 27 goals in 40 career games against Carolina. He has two goals in the five games against the Hurricanes this season, both coming in Capitals wins. He has only one goal in his last eight games, though, and does not have a multi-goal game in the 2012 portion of the season (his last coming on December 28th against the Rangers).

2. Perspiration. Even when the Caps win they look as if they are being out-worked. For instance, the Islanders carried play for 56 minutes in their 3-2 overtime loss to Washington on February 28th. If not for a late flurry and an overtime goal, things would look even more bleak for the Caps. But that is just one example. Losses to Ottawa and New Jersey by lopsided scores, not to mention the 5-0 shutout by Carolina on February 20th were as much a product of being out-worked as any other factor.

3. Consternation. The Caps have done a decent job of holding down shots. They have held opponents to 30 or fewer in nine of the last 12 games (27.5 average per game). Carolina has averaged 39 over the last three games against the Caps and has nine goals. It is not as if Carolina has been sniping the Caps silly, they have done it with volume, volume, volume. Stop it.

…have not done well lately. Not with a 6-9-2 record over their last 17 games and too many opportunities wasted to jump back into the top-eight. If the Caps lose this game, it will be the third three-game losing streak in less than a month. If they lose this game, it will mean a losing record for the home stand with one game to go. If they lose, they will be five points behind Florida with 16 games to play and three points behind eight-place Winnipeg (although the Caps have two games in hand). If they lose, they could be caught and passed by Toronto and Tampa Bay in the standings before midnight.

It’s time for a breakout…