The Washington Capitals continue their six-game home stand on Friday and Saturday when they host the New York Rangers in a back-to-back set of games at Capital One Arena.  These will be the first two of three games the Caps will have against the Rangers on this home stand, and they hope to turn things around this weekend after dropping their first two meetings against the Rangers back in February, a 4-2 loss in New York and a 4-1 loss at Capital One Arena.

The Rangers might not be a Stanley Cup contender this season, but they are showing signs of returning to competitiveness.  After a 4-7-3 start to the season, the Blueshirts are 8-5-1 over their last 14 games since February 18th, culminating in a 9-0 pasting of the Philadelphia Flyers at Madison Square Garden on Wednesday night.

The welcome, if not entirely unexpected outcome of the recent Rangers’ success is the production of forward Pavel Buchnevich.  Over the 14-game stretch, Buchnevich has been the Rangers’ leading scorer with 17 points in 13 games (6-11-17).  He also has the highest plus-minus rating over that stretch (plus-10).  The recent production has put Buchnevich on almost a point-per-game pace for the season (a team-leading 26 points in 27 games).  It is quite a step forward for a player who already exhibited some promise as a point producer over his first four seasons.  Over those first four years, Buchnevich posted a scoring line of 59-88-147 in 247 games, a 20-29-49 pace per 82 games.  Compare that to the 30-48-78 scoring pace per 82 games he has so far this season.

It is not a bad career start for a player taken in the third round of the 2013 Entry Draft, two spots ahead of Jake Guentzel (by Pittsburgh). He ranks 13th in his draft class in career goals scored (69) and 15th in points (173).  If Pavel Buchnevich has been a consistent scorer over the last 14 games, Artemi Panarin has been more productive, albeit in a more limited role.  Panarin dressed for only five of the last 14 games, going 2-7-9, plus-4, and leading the team in points per game (1.80).  He missed more than two weeks in that span, taking a leave of absence from the team following allegations of an assault incident in 2011.  Panarin and the club denied the allegations, suggesting they were an intimidation tactic in response to political comments from Panarin.

Panarin returned to the lineup last Saturday, posing points in all three games he played (2-4-6), his two goals scored in economic fashion, on a total of four shots on goal.  The three-game streak since his return extended his points streak to five games overall (2-7-9).  He has been consistent in his year-to-date scoring, posting points in 13 of the 17 games in which he played, a total that includes eight multi-point games.  His 1.41 points per game this season ranks third among all NHL players who have appeared in 15 or more games.  It has not been a sudden improvement for Panarin, either.  In 86 games with the Rangers over his season and a half with the club, he is 39-80-119, plus-40.  Those 119 points rank fifth in the league over that span, while his 1.38 points per game ranks third.  Panarin is 8-12-20, plus-7, in 17 career games against the Caps.

Chris Kreider leads the Rangers in goals over their 14-game run of success with ten, a total that leads the league over that span.  Kreider has been a dependable 20-goal scorer for the Rangers over the last six seasons preceding this one (five 20-goal seasons and a 16 goal season in 58 games in 2017-2018), but he has stepped up his production in this one, averaging a career-high 0.50 goals per game in 28 games.  Those ten goals over his last 14 games includes two hat trick, the first in a 4-3 loss in Philadelphia to the Flyers on February 24th and the other in a 6-1 win over the Devils in New Jersey on March 4th.  They were the third and fourth hat tricks of his career.  Kreider is on the brink of hitting a couple of offensive milestones. With one goal he would tie Anders Hedberg (172) for 20th place in Rangers history, and with four points he would tie Ron Duguay for 30th place in points (330) in team history.  Kreider is 6-6-12, minus-3, in 28 career games against Washington. 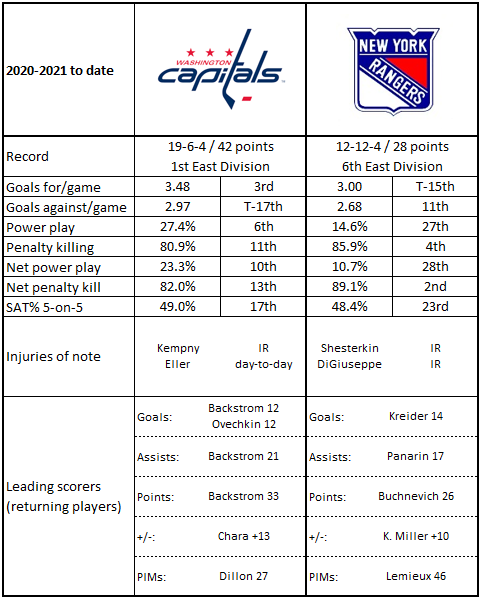 2.  The Rangers have dressed a lot of defensemen over their 14-game run, but they have been productive as a group.  Of nine defensemen appearing in at least one game, six have goals (Brendan Smtih has two), and all of them have points.

4.  New York has displayed a physical edge in road games this season, averaging 25.96 hits per 60 minutes, fourth-most in the league.

5. The Rangers have proved adept at pilfering the puck when on the road as well, averaging a league-high 6.58 takeaways per 60 minutes.

2.  Over that 16-game span, the Caps have 23 second period goals, second-best in the league.  They trail only the Rangers (but that seven-spot against the Flyers on Wednesday didn’t hurt).

5.  The Capitals have beaten the Rangers by three or more goals 28 times on home ice in the all-time regular season series.  Only the New Jersey Devils have suffered more such losses to the Caps in Washington in the regular season (33).

What a difference a year makes.  Last season, Mika Zibanejad posted a career high in goals with 41 in just 57 games (a 59-goal pace over 82 games) and did it most efficiently, his 19.7 percent shooting being a career best as well.  He also became the 44th player in NHL history to record five goals in a single game, potting five, including the overtime game-winner, in a 6-5 win over the Caps on March 6, 2020.  This season as another matter…until Wednesday night.

Until Wednesday night, Zibanejad was 3-8-11, minus-5, shooting 3.9 percent this season, and looking like one of the more overpaid forwards in the league ($5.3 million cap hit this year and next).  And then the Philadelphia Flyers came to town, a team against which he was 6-4-10, minus-19, in 29 career games.  The Rangers took a 2-0 lead into the second period when Zibanejad assisted on a Pavel Buchnevich goal to make it 3-0.  Two minutes later he assisted on another Buchnevich goal.  Then he recorded an assist on a Jacob Trouba goal.  That would be prelude to his recording a natural hat trick over a span of 10:10 to give him three goals and three assists, tying an NHL record for points in a single period, leading the Rangers to a 9-0 win.  Bryan Trottier did it for the New York Islanders in a 9-4 win over the Rangers in 1978, also with three goals and three assists.  Zibanejad also became the first player in Rangers’ history to record a natural hat trick with an even strength, a power play, and a shorthanded goal.

Is it a signal that he is breaking out of his year-long slump, or a brief respite from a dismal season.  Given that Zibanejad scored five goals in a game against the Caps last season, it will be one of the primary story lines for this game.  In 27 career games against the Caps, Zibanejad is 11-10-21, minus-5.

Garnet Hathaway is not expected to be the offensive producer that Mika Zibanejad is for the Rangers, but his offense has upticked lately.  After going 14 games with a single point (a goal), Hathaway has points in three of his last four contests (1-3-4, plus-6).  He is an example of how important getting that next level of scoring (or next-next level) is for success.  Washington is 7-2-0 in the nine games in which he has a point this season, 4-0-0 in games in which he recorded a goal.  And it isn’t just scoring, it is offensive engagement generally.  The Caps are 12-2-3 in the 17 games in which Hathaway had at least one shot on goal.

And, although physical play is his hallmark, it has not really translated into success, at least using the typical measures.  The Caps are 6-2-4 in 12 games in which he was credited with at least four hits, and they are 6-3-0 in games in which he spent time in the penalty box.  Ice time is a positive indicator, not surprising when bottom six forwards get more work when the Caps are ahead in games.  Washington is 14-3-2 in 19 games in which Hathaway logged at least 12 minutes, 5-3-2 in ten games in which he skated less than 12 minutes.  During the Caps’ six-game winning streak going into Friday’s game, his ice time has ramped up to an average of 12:36 per game (he averages 12:18 for the season overall).  Hathaway is 5-1-6, plus-5, in eight career games against the Rangers.

The Caps are entering a part of their schedule where they need to take advantage of teams well below them in the standings.  Starting with Friday’s game against the Rangers, the Caps will face the Blueshirts four times and the New Jersey Devils twice over their next six games.  But don’t sleep on the Rangers.  Yes, a 9-0 win is out of the ordinary, but the Rangers are a team with offensive skill that is starting to come together.  They lack consistency, though, and this is a trait the Caps have displayed in their results over the last month (even if there have been scary moments in games while getting there).  Both teams come into this two-game set having played what are arguably their best games of the season.  But the Caps are deeper, more responsible defensively (lately), more experienced, and more consistent.  That should be a recipe for a sweep against the pesky New Yorkers.