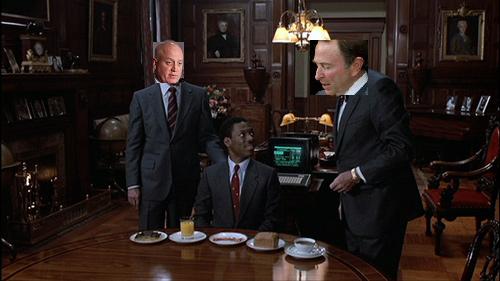 With no hockey to keep us occupied, we have partaken far too often of our favorite delicacy… pepperoni, anchovy, and marshmallow fluff pizza.  And doing it while watching a rerun of that classic comedy, “Trading Places,” had predictable effects.  Imagine the Duke Brothers – Randolph and Mortimer – replaced by Gary Bettman and Bill Daly, respectively, and you have the makings of the dream I had about who the real brains are behind the league…

Bill Daly: It's hit rock bottom. Come on, let's make a deal.  Tell the owners we’ll go for 50-50 in year 3... (on the intercom) call the owners; tell them we're prepared to make a deal with the union.

Billy Ray: You're going to get reamed on this one.

Gary Bettman: Why shouldn't we make the deal now, William?

Gary Bettman: (on the intercom) This is Gary Bettman.  Hold that deal over a moment…  (turns to Billy Ray) Tell me why you think the price of the deal is going down.

Bill Daly: Could we please make the deal now?

Billy Ray: If you want to lose money go ahead.

Gary Bettman: What are you trying to say?

Billy Ray: OK, players haven’t been paid in months.  So everybody's waiting for their bank accounts to hit rock bottom so they have to buy cheap stuff, like a Buick instead of a Ferrari.  The people with no money in their bank accounts are thinking, "Hey, we're losing all our money and Christmas is coming… I won't be able to buy my son the Sidney Crosby action figure the Kung Fu grip… And my wife won't make love to me ‘cos I ain't got no money.  They're panicking, screaming, “Make the deal! Make the Deal!”  They don't want to lose all their money.  They are panicking right now. I can feel it.  Look at them.

Gary Bettman: He's right, Bill, my God, look at them.

Billy Ray: I’d wait till you get to December 20th, then make the deal.  You'll have cleared out all the suckers by then.

Gary Bettman: Do you realize how much money he just saved us?

Gary Bettman: (back to the intercom) Advise the owners that we’ll offer our last and best proposal on December 20th.  Mr Valentine has set the terms.

Posted by The Peerless at 1:10 PM No comments: