The Peerless Prognosticator is ON THE AIR!!! -- Game 32: Capitals at Rangers, December 20th

On Sunday evening, the Washington Capitals head off to where it all ended – in two of their last three postseasons, that is.  Washington heads to New York to take on the Rangers at Madison Square Garden where their seasons ended in 2012 and 2015 with identical 2-1 scores, and where the Caps were whipped by the Rangers, 5-2, in their first meeting this season on November 3rd.

Since that meeting in early November, the Caps have been on a sustained run of success, going 15-3-2, and are now on a four-game winning streak.  The four-game streak is the third time this season Washington put together a winning streak of four or more games.

On the other hand, the Rangers are in a lengthy slide.  Their victory over the Caps on November 3rd was part of a nine-game winning streak and a stretch of 13 straight games in which they earned a point 11-0-2.  Since that run came to an end on November 19th in Tampa against the Lightning, the Rangers are 5-8-2 and have dropped from the top spot in the Metropolitan Division and the Eastern Conference to second in the division and third in the conference.

The Rangers will be returning home to Madison Square Garden after spending five of their last six games on the road, all of which they lost (they defeated the Edmonton Oilers at home, 4-2, last Tuesday).

In Game 32 last season, Rick Nash recorded a hat trick against the Capitals in a 4-2 win at Madison Square Garden, giving him a total of 23 goals for the season to that date on his way to a career-best 42-goal season.  Through 32 games this season, Nash has ten goals, two in his last 11 contests, and he is on a pace to finish with 25 goals, which would be his lowest for a full season since his rookie year in Columbus when he had 17 in 74 games with the Blue Jackets.  Nash is 12-8-20, plus-2, in 19 career games against Washington.

If Rick Nash has been a disappointment to date this season, Oscar Lindberg has been a surprise.  A second round draft pick of the Phoenix Coyotes in 2010, Lindberg was traded to the Rangers for Ethan Werek in May 2011.  While Werek is now toiling for the Florida Everblades of the ECHL, Lindberg is tied for second among NHL rookies in goals (10) and is fifth in points (17).  Like the rest of the team, though, Lindberg is in the midst of a slump.  He is without a point and is a minus-3 over his last six games.  He had a goal and an assist in the Rangers’ 5-2 win over the Capitals on November 3rd, his only career appearance to date against Washington. 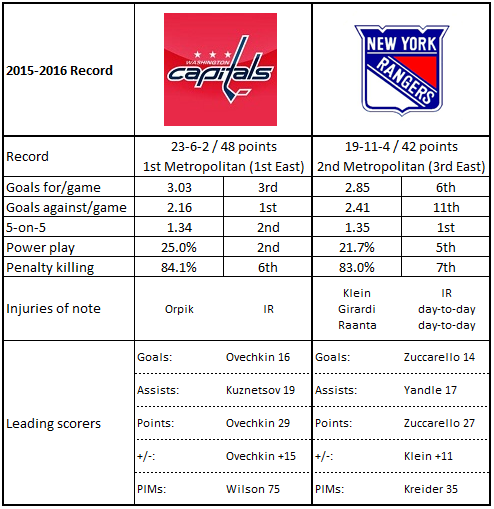 1.  Since that 3-0 shutout over Nashville back on November 3rd, the Rangers have had difficulty finding the back of the net.  They have averaged 2.46 goals per game in the 13 games since then, but nine of them came, oddly enough, in back to back losses – to Edmonton (7-5) and Calgary (5-4 in overtime) earlier this month.

2.  The Rangers and the Montreal Canadiens are the only two teams in the Eastern Conference having four defensemen with ten or more points.  For the Rangers that group includes: Keith Yandle (17), Ryan McDonagh (11), Marc Staal (10), and Dan Boyle (10).  If Dan Girardi records a point, it will make five defensemen in this group.

5.  As you might expect from a team in a prolonged slump, the Rangers are having possession issues.  It has been an issue all season for this club.  Overall, they rank 28th in the league in Corsi-for at 5-on-5 (46.5 percent).  They are 24th in score-adjusted Corsi (47.3) and 21st in close score situations (48.7).  They have yet to record consecutive games this season with more shot attempts than their opponents.

1.  When Alex Ovechkin and T.J. Oshie each recorded four points against the Tampa Bay Lightning on Friday night, it was the first time two Capitals turned the trick since December 10, 2013, against the Lightning.  Ovechkin had four points (all goals) and Nicklas Backstrom had five points (1-4-5) in a 6-5 Gimmick win.

2.  When Oshie finished the night with four points, it gave the Caps six skaters with 20 or more points this season.  No team in the league has more (Ottawa also has six).

3.  When Braden Holtby was relieved by Philipp Grubauer in the Caps’ 5-3 win over Tampa Bay on Friday night, it was the first time a Capitals goaltender did not finish a game he started this season.  It was the first time Holtby was pulled from a game since allowing three goals on 13 shots in 14:47 in a 4-3 loss to the Nashville Predators last March 28th.

4.  From the “shots matter” file… The Capitals lead the league in wins when outshooting the opposition (14).  Their total of 18 games outshooting opponents is tied for third most in the league.

5.  The last time the Caps had consecutive games with more shot attempts than opponents was November 12-13 against Philadelphia and Calgary.  Since then, Washington’s Corsi-for at 5-on-5 is 46.6 percent and has been under 50 percent in 11 of 15 games.

As Mats goes, so go the Rangers.  In 15 games in which Mats Zuccarello has a point this season, the Rangers are 12-2-1; they are 6-9-3 in games where he is held off the score sheet.  He looked to be coming out of a slump recently, following a nine-game stretch in which he recorded a single point with a three-game points streak against the teams from Alberta (four points in two games against Edmonton and a point against Calgary).  He was blanked in his last two games, though, both of them losses, to Minnesota and to Winnipeg.  He was a minus-6 in those two games to add to his, and the Rangers’ misery.  Zuccarello is 0-5-5, plus-4, in 11 career games against Washington.

When Nicklas Backstrom recorded his 600th career point on Friday night in the Caps’ 5-3 win over Tampa Bay, he became the eighth active player to record 600 points since 2007-2008, when he entered the league.  It is an impressive list.  And he is adding to that list in as quiet a way imaginable.  Backstrom is 6-14-20, plus-7, over his last 20 games and has not gone consecutive games without a point over that stretch.  He has not had a “minus” game in his last 14 games.  If there is an odd number on his resume, it is his power play scoring.  Backstrom is tied for the team lead in power play points (12, with John Carlson), but ranks only tied for 14th in the league.  He was tied for third in power play scoring last season (33 points) and led the league in 2013-2014 (44 points).  Backstrom is 6-19-25, minus-5, in 31 career games against the Rangers.

Despite similar records, the Capitals are what the Rangers are not in one important respect.  Only four teams have more one-goal wins than the Caps (10), while the Rangers have more wins by three or more goals (10, leading the league) than they have one- and two-goal wins combined (9).  Almost half of the Rangers’ 34 games (16) have been settled by three or more goals, while almost half of the Caps’ 31 games (14) have been settled by a single goal.  To the extent this game remains close, it would seem to favor the Capitals.