The Peerless Prognosticator is ON THE AIR!!! -- Game 2: Capitals at Bruins, October 11th

The Washington Capitals take their new “Barry Trotz” model on the road for a test drive on Saturday, visiting TD Garden in Boston to face the Bruins in a match-up of teams that had very different finishes in 2013-2014 and that have very different aspirations in 2014-2015.

The Capitals are a team that has been on a slow slide from the discussion of Stanley Cup contenders in 2010 to also-ran status last year, failing to reach the post-season for the first time since 2007.  For the Capitals, returning to the playoffs is a reasonable goal.  The Stanley Cup finals?  That is something else.  Not impossible, mind you, but it seems a bigger reach.

On the other hand, there are the Boston Bruins.  For all the words spent describing the talent and achievements of the Chicago Blackhawks, the Los Angeles Kings, and even the Pittsburgh Penguins, the Bruins have won more regular season games over the last four seasons (177) than every other team in the league except the Penguins (187).  Since 2008, no team – not Chicago, not Los Angeles, not Detroit or Pittsburgh – has won more playoff games than Boston (57).

This year’s edition of the Bruins is once more in the discussion of team expected to challenge for a berth in the Stanley Cup finals.  They are skilled, ornery, and deep.  Last season they had ten players with ten or more goals, 18 with ten or more points, 15 with a plus-minus of plus-10 or better.  Sixteen different players had game-winning goals, 12 had power play goals, and 20 players had at least ten penalty minutes (10 with at least 40). 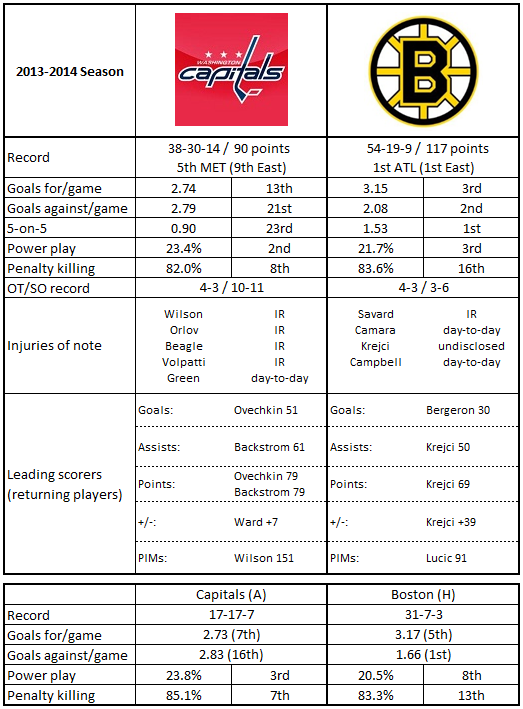 1.  Stingy.  Only once over the past six seasons have the Bruins ranked lower than third in scoring defense (sixth in 2011-2012).  Over those six seasons the Bruins averaged allowing only 2.28 goals per game.

2.  Inside-out.  It is a bit odd to find a defenseman leading a team in power play goals, but such were the Bruins last season.  Zdeno Chara led the club with ten in 2013-2014, three more than Patrice Bergeron.

4.  Ornery, yes; stupid, no.  One might think that a team with the reputation that goes with being the “Big Bad Bruins,” they might be a heavily penalized team.  Not really, or at least not as much as you might think.  The Bruins’ 292 minor penalties taken was 12th-fewest in the league last season.  They did finish second in the league in fighting majors, though, with 46 (Toronto had 48).

1.  The Caps led the NHL in power play goals last season (68).  On the other hand, only three teams allowed more shorthanded goals against than the ten the Caps gave up: Philadelphia (11), Toronto (12), and Edmonton (13).

4.  The Caps allowed only 21 power play goals on the road last season, sixth fewest in the league.  That was nine fewer than they allowed at home, the largest such negative difference between home and road in the league.

Over the course of his ten year career coming into this season, Patrice Bergeron recorded 31 points against the Capitals in 32 career games (0.97 points per game). Among 16 teams he has faced more than ten times, the only larger points-per-game mark he as is 1.00 points per game against the Los Angeles Kings (11 points in 11 career games).  And if there is any further evidence one needs about his all-around ability, over the course of that career Bergeron has received votes for the Calder (eighth in 2004), Byng (seven times receiving votes), Selke (five times, two wins), and Hart (three times).  For good measure he also has won a King Clancy Trophy for leadership and humanitarian contributions, and he has received all-star team votes in each of the last three years, finishing as high as fourth among centers last season.  He is 8-23-31, minus-3 in 32 games against the Caps.

Evgeny Kuznetsov has played in only 18 regular season games in the NHL.  However, in his season debut on Thursday he skated for 6:36 in ice time, his lowest amount of ice time to date in those 18 games.  He skated only 4:10 at even strength and did not record a shot on goal at either even strength or in the 2:26 he skated on the power play.  He did not record a shot attempt.  That is what skating on a fourth line with a rookie (Liam O’Brien, 2:40 in total ice time) and a prospect (Chris Brown, 3:42 in total ice time) on the fourth line will do.  This was not the kind of season opener Kuznetsov might have imagined, especially after making such a good impression in his 17 games to close last season.  New season, new coach, and he has to earn his time, but so long as he is skating with O’Brien and Brown (19 total games between them), ice time might be hard to come by.  He has one career game against the Bruins, scoring a goal in a 4-2 loss to Boston last March 29th.

The Caps have had as much success as anyone against the Bruins lately.  They are 4-1-0 in their last five games against Boston and 6-3-0 since November 2010.  The Bruins are still the Bruins, a team that is largely unchanged in key personnel and style for what seems like the last 20 years.  They are good, know it, and have high aspirations.  The Caps are a team in transition (again), looking to find a comfort level employing new personnel and applying a new philosophy.  They are a work in progress, and progress is what is hoped for after the disappointing result in the opener against Montreal.

Posted by The Peerless at 7:20 PM No comments:

It started so well. The Washington Capitals celebrated their 40th anniversary playing hockey in the NHL by bringing back some of the greatest players in team history. But the start of the party was a lot happier than the end of it as the Montreal Canadiens spoiled the fun with a 2-1 Gimmick win at Verizon Center.

One of the surprises of training camp, Andre Burakovsky, continued to impress when he took a centering pass from Troy Brouwer and one-timed the puck past goalie Dustin Tokarski to give the Caps their first lead of the season in the game’s seventh minute.

The Caps continued pounding pucks at the Montreal net, at one point leading the Canadiens in shots on goal, 14-0. The Canadiens did not record their first shot on goal until there was just 2:24 left in the period and went to the locker room at the first intermission outshot by a 15-2 margin.

The trouble with that kind of domination is that if you don’t capitalize on it with more than a single goal, you often pay for it later. That was the case on this night. The teams played through a scoreless second period with the visitors controlling much of the play, and in the third period, they finally broke through. Tomas Plekanec started the play by picking up a loose puck in the right wing corner and moving it up the wall to Tom Gilbert at the point. As Gilbert sent the puck back down to Alex Galchenyuk, Plekanec continued circling around the faceoff circle, finding an opening to take a pass from Galchenyuk. Hockey being what it is, the Caps then lost a game of inches. Karl Alzner missed blocking Galchenyuk’s pass by inches. Alex Ovechkin missed lifting Plekanec’ stick by inches. And then, Plekanec’ snap shot threaded its way past Nicklas Backstrom and Matt Niskanen by the thinnest of margins, flying just under the bar past goalie Braden Holtby to tie the game with 9:29 left in regulation.

That would do it for the hockey portion of the evening, leaving the decision up to the trick shot competition. Backstrom and Eric Fehr converted for the Caps in the first three rounds, Galchenyuk and David Desharnais for the Canadiens. When Ovechkin and Plekanec came up empty in the fourth round, it was up to the rookie for the Caps, Burakovsky. His attempt was foiled, leaving it up to Brendan Gallagher for Montreal. Gallagher skated in with speed, and the slightest hesitation in firing the puck seemed to freeze Holtby for an instant. It was enough. Gallagher’s shot snuck past Holtby’s glove, and it was Montreal celebrating at game’s end.

-- One game, minus-1. The vigil on Alex Ovechkin’s plus-minus begins.

-- Andre Burakovsky was not the only rookie to make fans take notice on this evening. When Brandon Prust stood up Jack Hillen behind the Washington net in the second period, Liam O’Brien quickly stepped in and engaged Prust in some fisticuffs. It was a reasonably even duel, the rookie giving a good account of himself against a player with more than 100 regular season bouts.

-- Sometimes they do, sometimes they don’t. Fights that is…change momentum. When O’Brien and Prust went at it, the Caps had an 18-3 edge in shots and a 1-0 lead on the scoreboard. After that, the Canadiens outshot the Caps, 27-6, tied the game, and won it in the freestyle competition.

-- Last season the Caps’ power play started like someone set a match to gasoline, 3-for-6 in their opener against Chicago and 6-for-12 over their first three games.  Last night it was 0-for-5 and managed only four shots on goal, none of them by Alex Ovechkin.  Nineteen times last season the Caps had five or more power plays in a game; seven times they came up empty.  It does not happen often, but it happens.

-- A shot attempt advantage of 65-46 bodes well for the Caps.  Do that regularly, the wins will come.

-- Three of those shot attempts came off the stick of Karl Alzner.  He has averaged only 0.87 shots per game in his career, but last year had a career high of 1.16 per game.  If he can get shots to the net it opens other things up, even if he does not score.

-- Bet no one had Evgeny Kuznetsov getting only 6:36 in ice time in the season opener, more than a third of it (2:26) on the power play.  He skated only two shifts in the third period, none in the last 12:40 (he did have a shift in overtime).

The Caps are already ahead of where they were at this point last season.  They have a standings point.  But as happens so often when a team has a lot of energy at the start of a game, particularly in an emotionally charged atmosphere, if they don’t convert their early chances, that energy often dissipates, and the opponent can take advantage.  Even though the Canadiens played the previous night, that is what appeared to happen to the Capitals, especially after the O’Brien-Prust dust-up.

There is nothing especially noteworthy to take away from this game, good or bad.  It is one of 82, one that folks probably won’t much remember months from now.  Well, some might remember this…