The Peerless Prognosticator is ON THE AIR -- Caps vs. Blackhawks, March 19th

It’s off on the next leg of the whirlwind tour of the great American Midwest, as the Caps head to Chicago to take on the Blackhawks. Chicago, that toddlin’ town…the Windy City…hog butcher to the world… 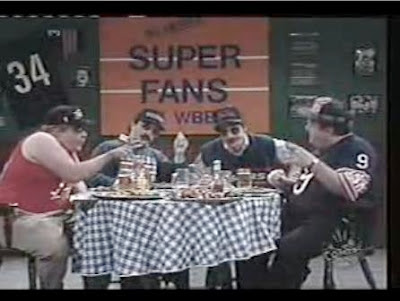 Well, this is hardly a surprise…the Super Fans ready for a night of hockey. It’s the Swerski Brothers – Bob and Bill – Todd O’Connor, and Carl Wollarski. Uh, Bob…I don’t see Bill. Has he had…

Probably from watching the Blackhawks lately.

1-4-1 in their last half-dozen. I guess their playoff chances are about done, eh Carl?

There is cause for optimism, though…you have those precocious twins…

“Hey, I dunno about any ‘precoshuss,’ Peerless, but dat Patrick Kane and dat Jonathan Too-ees…"

"Whaddever…dose guys are havin’ a great year…I’d go so far as to call it, well, almost 'Dikka-esque.'”

But about the kids…first and fourth in scoring among rookies.

The club is sputtering, though. They’ve given up 22 goals in this 1-4-1 stretch, and haven’t given up fewer than three in any game.

“yeah, well…it’s not like we’ve got Patrick Roy in goal…”

“But we do have Patrick Lalime, Carl…”

What about Corey Crawford?

What about your special teams?

You’ve got a former Cap on the roster – Robert Lang. How’s he been doing?

What about Cam Barker?…he seems to be the forgotten guy in that 2004 draft that had Alex Ovechkin and Evgeni Malkin going right ahead of him.

“Nice kid…he’s gonna be a good one. But he’s probably a year or two away.”

Anyone else we should watch out for?...

“Patrick Sharp – ya know, we got three Patrick’s on dis team. Anyway, he’s sneaky – seven shorties and seven game winners, one in overtime."

I am intrigued by one guy for the Hawks – Dustin Byfuglien – the kid's a big hitter, eh?

“And don’t ferget, Todd, he has a decent scoring touch, too?”

“Right you are, Bob…17-16-33 so far. Leads all the defensemen in scoring. Tied with your Mike Green for the NHL goal scoring lead.”

I was wondering…just how do you pronounce his name?

Well, guys, you’ve got too many pork products on the brain. The Caps matched their season-high winning streak with their fourth in a row last night. Tonight could be their first five-game streak since mastodons walked the earth. There will be no mastodons…

…but there will be a Caps win. 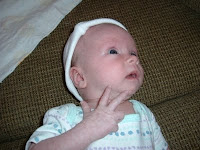 That’s a “one-at-a-time” reference. The Caps won their first game on their six-game road trip by edging the Nashville Predators 4-2, the final margin coming with only 3.5 seconds left on an empty net eight-ball-in-the-center-pocket bank shot by Alex Ovechkin.

It was quite a night. Fans got three games worth for their money. In the first, the Caps steamrolled the Predators, scoring three goals in less than 15 minutes. But there were hints of what would come to pass when the Caps took two minor penalties in the last five minutes of the period.

In the second “game,” the home fans were treated to a much more energetic Predators team, aided by another minor penalty called on the Caps early in the period. With Tom Poti off, the Predators sliced into the Caps’ lead on a goal by J-P Dumont.

In the third, the fans saw one team hanging on for dear life, the other marshalling their grit and focus to wear down the visitors until they scored a goal mid-way through the period to make things interesting – and very uncomfortable for the guests. However, the Caps were 23-1-2 when leading after two periods. History was on their side. And Ovechkin cemented number-24 when he intercepted a centering pass from Dumont in the high slot in front of Caps goalie Cristobal Huet, and then banked the puck off the boards and down the ice. The puck slid into the net an instant before Nashville’ Marek Zidlicky did the same in an unsuccessful attempt to catch up.

Ovechkin had another first star game with a goal, two assists, two hits, and three blocked shots in almost 21 minutes of ice time. He had help…

Mike Green (who hasn’t had a goal in March, by the way) chipped in with an assist, two hits, and three blocked shots.

Cristobal Huet stopped 24 of 26 shots to pick up his fourth win in six decisions since coming to the Caps from Montreal.

It was milestone night for Ovechkin…first Cap with two 100-point seasons, fastest player to 300-career points in more than a decade (237 games versus Peter Forsberg, 229 games, 1997). And it was probably no accident Ovechkin was on the ice on the last shift…the seeds of that came in a statistic you find on the right side of the NHL score sheet – three blocked shots, including one he took off his boot that had him limping around (but not enough to keep him from getting some giddyap into the Nashville zone once the puck was freed and passed onto his stick).

Nashville got the effort they needed out of their top players – Jason Arnott and J-P Dumont (their leading scorers) had the goals as well as six shots between them (Arnott had 10 attempts). But the Predators suffered the same problem that the Caps faced early in the year – they couldn’t get much out of the guys who have to provide supplemental scoring support.

It was an odd game in one respect. Neither team lacked for chances, although the Caps did go into a shell after going up by a field goal. Probably 80 percent of the shots came from between the circles and in close. This could have been a 7-5 game had Cristobal Huet and Chris Mason (in relief of starter Dan Ellis, who – had he remained in after giving up three goals on eight shots – might have allowed that seven-spot) not had excellent games.

And in the end, the Caps moved up one rung on the Eastern Conference standings ladder, climbing over Buffalo into ninth place. They kept pace with Philadelphia, which held off Atlanta, 3-2. Take it one game at a time, and one rung at a time.

Posted by The Peerless at 7:00 AM No comments: