The Peerless Prognosticator is ON THE AIR!!! -- Game 18: Capitals at Coyotes, November 18th

The Washington Capitals try to break their two-game losing streak as they head to the desert and their second meeting this season against the Arizona Coyotes.  These teams last met on November 2nd with the Coyotes spotting the Caps a 3-1 lead before storming back with five unanswered goals on their way to a 6-5 win at Verizon Center.

Since then, both teams are on something of a meandering course.  The Caps are 3-2-1 since dropping that decision to the Coyotes.  They have been outscored by a 16-15 margin, but they are 2-1-1 in one-goal decisions.  Special teams have been a mixed bag, the power play going 3-16 (18.8 percent) in those six games but without a goal in their last two games and without so much as a power play opportunity in their most recent contest, a 4-1 loss to the St. Louis Blues to open this road trip.

The penalty kill has been another matter.  While it has struggled for much of the year (78.6 percent through the first Arizona game), it is 13-for-15 in its last six contests (86.7 percent) and perfect in its last three games (9-for-9).

The Caps are led in goal-scoring, perhaps improbably so, over their last six games, by Marcus Johansson with four.  Johansson also is tied for the team lead in points over that span (five) with Alex Ovechkin and Nicklas Backstrom, each with a 2-3-5 scoring line.  They have spread the help around with five players each recording three assists.

Meanwhile, the Coyotes are grinding along with a 4-3-0 record since their November 2nd meeting with the Caps.  Martin Hanzal and Shane Doan each have three of the 18 goals scored by the Coyotes over that seven-game span, all of Hanzal’s coming on a hat trick scored against Vanouver last Friday in a 5-0 win over the Canucks.  Hanzal and Vermette share the scoring lead in this stretch with five points apiece.  It is part of what has the look of a balanced offense.  In their 4-3-0 run the Coyotes have 18 different skaters with points, 11 different players with goals.

The special teams for the Coyotes have been anything but, recently.  Over their last seven games Arizona is just 3-for-27 on the power play (11.1 percent) and just 21-for-26 (80.8 percent) on the penalty kill, bringing their special teams index over that period to a disappointing 91.9.  Oddly enough, while the recent power play performance is substantially worse than the season as a whole (20.0 percent), the recent penalty killing is actually an improvement (77.0 percent for the season).

Here is how the numbers compare for the two teams: 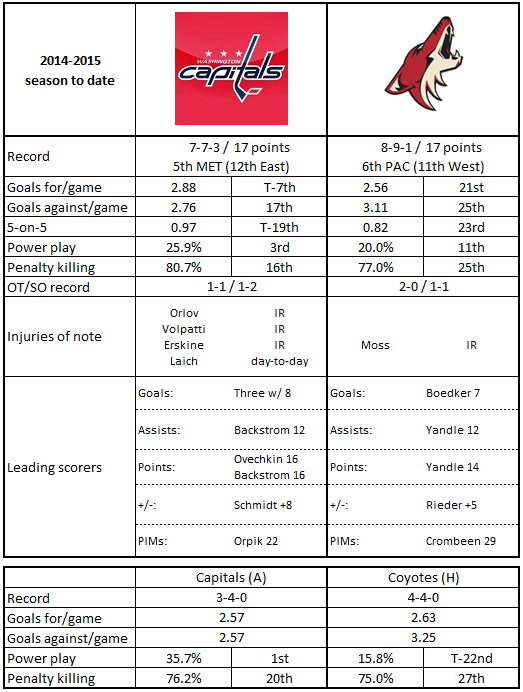 1.  Arizona has received decent scoring support from the blue line in their 4-3-0 run.  Six defensemen have points, and as a group they are 3-10-13.

2.  The Coyotes balance their skaters in terms of ice time, at least among the forwards.  No forward averages as much as 20 minutes per game, and only one (B.J. Crombeen) averages less than ten minutes a game.  The defensemen are another story.  Oliver Ekman-Larsson (26:15) and Keith Yandle (25:10) both average more than 25 minutes a game.  Only Nashville (Shea Weber and Roman Josi) and Dallas (Alex Goligoski and Trevor Daley) have as many as two defensemen averaging more than 25 minutes a game.

4.  Since playing the Caps on November 2nd, the Coyotes have five one-goal decisions in their seven contests.  They are 3-2-0 in those games, one of those wins settled in the trick shot competition (against Anaheim on November 7th, 3-2).

1.  November is “one-goal month” for the Capitals.  Six of their eight decisions have been by one goal. Their record in such contests is 2-3-1, including the 6-5 loss to Arizona on November 2nd.

4.  Washington has been reasonably well-behaved in the context of the rule book.  Only seven teams have fewer minor penalties taken than the 67 charged to the Caps.

This has the makings of a breakout year for Mikkel Boedker.  With seven goals in 18 games, he is on a pace to finish with 32 goals, a total that would obliterate his career high (19, set last season).  Boedker was an eighth overall draft pick in 2008, but it has not been an easy climb for him to get to this level.  A decent rookie season in 2008-2009 (11 goals in 78 games) was followed by a year spent mostly in the AHL (64 games with San Antonio).  He split time between Phoenix and San Antonio in 2010-2011 before sticking for good in 2011-2012.  He has not missed a game with the Coyotes since.  He comes into this game with the Capitals with points in each of his last four games (2-2-4).  In six career games against the Caps, he is 1-2-3, minus-1, including a pair of assists in the 6-5 win over Washington on November 2nd.

There are no gimmes on the NHL schedule, but this is where the calendar looks a lot more hospitable for the Caps, starting with this game.  The Caps next three opponents – Arizona and Colorado on the road, followed by Buffalo at home – have a combined record at the moment of 18-30-8, and all of them are below .500 in standings points.  Except for a 4:38 span straddling the second and third periods, when the Coyotes scored three goals, the first of the meetings between these clubs was dominated by the Caps.  Unfortunately that’s like saying that but for a ruckus in the President’s box at Ford’s Theater, “Our American Cousin” was a delightful play.

The Caps have found it difficult to sustain any continuity in their performance from game to game, especially after their 3-0-2 start.  Putting together consecutive good games has been uncommon.  It is not as if the Coyotes have been setting the world on fire with their play.  It’s time the Caps start setting some fires of their own.  Under their own backsides would be a good start.