The Peerless Prognosticator is ON THE AIR!!! -- Game 58: Capitals at Sharks, February 14th

The Washington Capitals start their annual California tour on Thursday night when they visit the San Jose Sharks at SAP Center.  Washington will be trying to even their road trip at a win and a loss after dropping a 3-0 decision to the Columbus Blue Jackets on Tuesday night.  San Jose will bring a six-game winning streak into this contest, a streak that started in Washington with a come-from-behind 7-6 win in overtime on January 22nd.

If you think about the Sharks and who might be their leading scorer on home ice, Joe Thornton might come to mind; he is the active leader in points overall (1,457) and on home ice (771).  Logan Couture, Brent Burns, or Erik Karlsson might get some consideration, too.  But Timo Meier?  That’s right.  Meier (10-16-26) leads all Sharks in home ice points this season.  Meier is in his third NHL season, the ninth-overall pick of the 2015 entry draft.  He was taken by the Sharks ahead of such young stars as Mikko Rantanen (10th overall by Colorado), Mathew Barzal (16th overall by the Islanders), and Brock Boeser (23rd overall by Vancouver).  What is odd about his scoring at home is that Meier goes into this game with points in five of his last six home contests, all of them assists (seven).  He has not scored a goal on home ice in two months, two goals in a 3-2 win over Dallas on December 13th.  Not that it has mattered much to the Sharks, who are 7-1-2 in the ten games at home since Meier last scored a goal there.  In three career games against the Caps, he is 1-2-3, plus-4.

The Sharks have played 16 games in the new year, and Brent Burns is the only defenseman among the nine to have dressed to record a goal.  The five he has are tied for fourth-most in the league since January 1st (with Kris Letang).  That is not surprising.  Burns was the only defenseman in the league over the last five seasons preceding this one to record three 20-goal seasons.  However, while Burns seems likely to surpass last year’s 12-goal total, having 11 in 57 games this season make it seem unlikely that he will make it four years in six with 20 or more goals.  If he records a point, that’s a sure-fire indicator of success for the Sharks.  San Jose is 13-1-3 in the 17 games in which Burns recorded at least one point on home ice.  Burns is 6-11-17, plus-2, in 17 career games against the Caps.

When last we saw goaltender Martin Jones, he was in the throes of a slump, having allowed 11 goals on 47 shots in losing consecutive games before facing the Caps.  And then, he allowed six goals in 46 minutes at Capital One Arena.  However, he shutout the Caps over the remainder of regulation, watched as his teammates scored a pair of goals in the last half of the third period (the latter with one second left in regulation), and escaped with a win, becoming only the fourth goalie in San Jose history to win a decision when allowing six or more goals.  He has been better since, going 4-0-0, 1.95, .936 in four appearances.  It is his longest stretch of games with a save percentage over .925 this season. 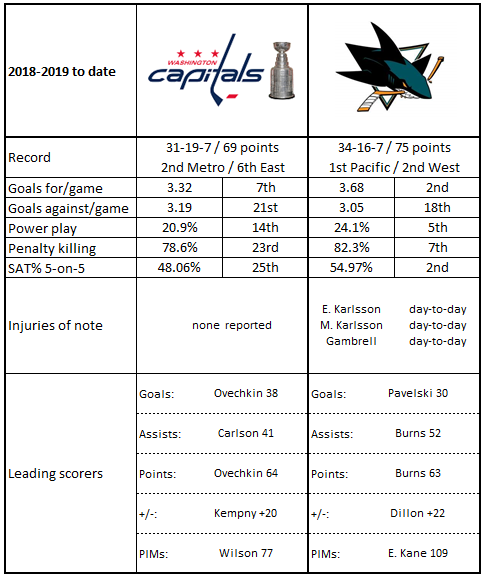 1.  Only three times in 26 home games this season have the Sharks scored fewer than three goals on home ice.

2.  San Jose is one of three teams with at least ten wins by three or more goals on home ice.  Only Boston and Tampa Bay (both with 11) have more than the 10 that the Sharks have posted.  No team has fewer losses in regulation on home ice this season than the Sharks (four).

1.  The Caps are an all or nothing team of late.  When they aren’t being shut out, they are abusing goalies.  In their last 11 games, the Caps have been shut out three times, while in the other eight instances they scored three or more goals.

2.  The Caps are the only team in the league with fewer than ten power play goals on the road (nine).  They also happen to have the fewest power play chances on the road so far this season (61).

3.  Odd fact… only two teams since January 1st have allowed more shots on goal than the Caps (632).  Both of them – Philadelphia and Winnipeg – have 11 wins.  Alas, the Caps have but seven.

5.  The Caps are third in the new year in another category.  They have been charged with 249 giveaways since January 1st, third behind Montreal (250) and Florida (284).  These last three random facts make it little surprise that the Caps have a 7-8-4 record since January 1st.

When contemplating the top goal scorers in recent NHL history, it would be easy to overlook Joe Pavelski.  In the most recent ten seasons ending with last season, the top ten in goal scoring includes the expected suspects – Alex Ovechkin (1st/444), Steven Stamkos (2nd/348), Phil Kessel (5th/300), and Evgeni Malkin (8th/290) among them.  But that group also includes Pavelski, who finished tenth in that group with 284 goals.  He stands out among that group as a special teams producer, he and Patrick Marleau being the only two among the ten with more than 90 power play goals in those ten seasons (Pavelski has 96 to Marleau’s 91) and more than ten shorthanded goals (Pavelski has 14 to Marleau’s 18).

Pavelski is among the all-time franchise leaders in a number of categories: games played (945/third), goals (347/second), assists (400/third), points (747/third), plus-minus (plus-116/third), even-strength goals (220/second), power play goals (117/second), shorthanded goals (10/fifth), and game-winning goals (56/second), shots on goal (2,807/second).  He is having a typically “Pavelski” season this year, having posted 30 goals, the fifth time in his 13 year career he hit the 30-goal mark.  He has also appeared in all 57 games for the Sharks this season, a reflection of the uncommon durability to have missed one game over his past eight seasons.  Pavelski is 9-12-21, plus-8, in 18 career games against Washington.

Kuznetsov has been on fire of late, going 7-8-15, plus-5, in his last nine games.  He has five multi-point games in that stretch.  And his scoring certainly has mattered.  The Caps are 4-1-2 in the seven games in which he had points, while they were shut out in both games in which he did not record a point.  Kuznetsov will bear watching as this road trip unfolds.  He is closing on a number of personal milestones.  He needs five goals to become the 28th player in team history to reach 100 goals with the club.  Caps fans might be more interested in the game-winning goals.  His next one will be his 20th, the 20th player in team history to reach that number.  And just for kicks, if he gets the game-winner in each of the remaining games on the trip, he would vault into a tie for 11th place in team history, joining Kevin Hatcher and Brooks Laich with 24.  Kuznetsov is 1-4-5, even, in 10 career games against the Sharks.

It is a good thing that the rest of the Metropolitan Division is having a tough time.  The Caps have as many points as Columbus since January 1st (18) and one more than Pittsburgh (17).  Carolina leads the division (27), but all that has gotten them so far is to within a point of Pittsburgh for the second wild-card spot.  Even the Islanders, who are second in points since January 1st (26), have not yet pulled away, holding a three-point lead on the Caps in the Metro standings (with a game in hand).  In this respect, the Caps are fortunate to be where they are, safely ensconced for the moment in a playoff spot and with opening round home ice advantage.

This can change quite quickly, though, given the schedule that the Caps face over the next ten days and five cities.  California is always a challenge, the Toronto Maple Leafs are good, and the Buffalo Sabres will be desperate with the trading deadline looming.  If the Caps put forth the sort of indifferent, unremarkable effort in San Jose that they did in Columbus, they will be plastered.

So, in the currency of Valentine’s Day, in this game the Caps need to have their…

If that happens, everyone in Capitals Nation will…