That Was The Week That Was: November 7-13, By the Tens

The second week of November has come and gone, and here is how it went for the boys in red… 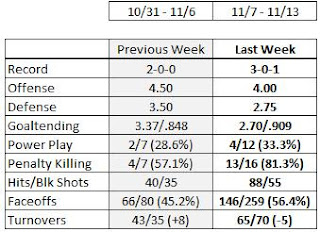 This was a week full of potential land mines for the Caps. First up was the Philadelphia Flyers, who bring their own brand of nastiness to any game in which they play. The Caps showed that they could resist the temptation to play a retaliatory sort of game and ended up on the long side of a 3-2 overtime decision. Then there was the visit to Madison Square Garden, which can be intimidating for veterans, let alone the youngsters that populate a roster such as Washington’s. But the Caps came out with a 5-3 win after scoring the last three goals of the game. Tampa Bay came to town trying to impress as the new big dog on the block but skated out of town a 6-3 loser. Even in Buffalo, where the Caps played some of their worst hockey in recent memory in the second period of that game, the Caps managed a standings point in a 3-2 overtime loss. A 3-0-1 week has to be looked upon as a success.

It was more of the same for the Caps last week, and by that we mean slow starts and bigger finishes. Three goals scored in the first period of the four games, five in the second period, seven in the third, and one in the two overtimes in which the Caps played. It was quite a balanced week for the Caps, too. Eleven different Caps had goals, and 17 players registered points (including all seven defensemen who played). Alexander Semin had the big week (4-4-8), with Nicklas Backstrom chipping in seven (1-6-7) and Alex Ovechkin six (1-5-6).

It was not an especially good week for on the defensive side of the ledger, but in fairness the Caps played two top-ten offensive teams last week (Philadelphia, New York Rangers). Allowing those two teams a total of five goals – none of them in the third period – is a fine result. And Tampa Bay certainly has capable fire power in Steven Stamkos, Martin St. Louis, and Vincent Lecavalier. Overall the Caps continued to show an ability to keep their net clean late. Only three of the eleven goals were scored in the third period or overtime in the four games.

The story of the week was the play of rookie Braden Holtby. He was 1-0-1 for the week, stopping 47 of 52 shots in a pair of games that went to extra time to settle. He defeated the Flyers in his first NHL start and kept the Caps close enough to earn a point against Buffalo on a night when the skaters didn’t seem to be doing much in the way of skating. Sandwiched between those two games were a pair of wins for Michal Neuvirth, who was the beneficiary of 11 goals scored by the Caps. It provided him some margin for error while he was stopping 63 of 69 shots. What was most noteworthy about Neuvirth’s performance for the week was his stopping 23 of 25 third period shots.

That the Caps finished the week converting one of every three power plays is a good thing. That they had only 12 chances to do so wasn’t so good. And getting a total of one chance in each of the last two games of the week was not good at all. It would be hard to improve on four goals on 17 power play shots, but the difficulty is not getting the chances to take those shots. Given that the Caps had only one power play against Buffalo, this was probably the difference in failing to secure a perfect record for the week.

It was not a bad week, but this is not the penalty killing group that started the season, either. Part of this might have been defenseman Tom Poti missing three games last week (although he was on the ice for a power play goal in his only appearance, against Tampa Bay). But it is hard to overlook that the Caps allowed 29 shots on 14 power plays over the last three games of the week (the Flyers had none on either of their two power plays in the first game of the week). Teams are getting some pretty good looks on the man advantage, and it makes the .897 save percentage for the week from the Caps’ goaltenders on the penalty kill rather impressive.

This is an area where the Caps might not get enough credit from fans. From time to time the Caps seemed to be viewed as a physically unimpressive (or unwilling) team. But the fact is, this weeks' work left the Caps sixth in the league in hits, fifth in blocked shots.

It was a dominating week in the circle for the Caps, who took the majority of faceoffs in each of the four games. David Steckel had a good week (67.9 percent), which is to be expected. But Nicklas Backstrom had a week that was almost as good (66.2 percent). The strong week allowed the Caps to jump back over 50 percent for the season (50.8 percent) and into 11th place in the league.

Last week was not a very good one for the Caps in this area. The result was a product of recording 40 giveaways in the four games. Perhaps that is what happens in a high-risk/high reward style the Caps frequently seem to play, but at the moment they are third in the league in total giveaways. That is offset by the fact that they are also third in takeaways, proving that the Caps giveth, and the Caps taketh away (oh, we’re gonna burn for that one).

3-0-1. What is so bad about that? Well, nothing, really, if the Caps are scoring four goals a game. But in all three wins the Caps allowed the first goal, and in all four of the week’s games they had to come back from second or third period deficits to earn standings points. It was indicative of a club that could dominate for 30-40 minutes of a game, but one for which the 60-minute sort of game has been infrequent.

The Young Guns had a pretty good week. Alex Ovechkin, Alexander Semin, and Nicklas Backstrom (reconstituted as the top line for much of the week) were a combined 6-15-21, plus-13 for the week. Mike Green was on the ice for only three of the 11 goals against, which isn’t a bad number considering that he averaged 26:51 in ice time for the week.

Frankly, we would be more worried about the within-game inconsistency if the calendar said “March” instead of “November.” They learned last year that peaking (like with, say, a 14-game winning streak) in January and February -- or November -- isn’t really a formula for success where post-season success might be a product of peaking at the right time and in the right way as much as it is a matter of talent.
Posted by The Peerless at 1:48 AM 2 comments: