The Peerless Prognosticator is ON THE AIR!!! -- Game 37: Capitals at Golden Knights, December 23rd

The Washington Capitals, fresh off their stunning 3-2 overtime loss to the Arizona Coytoes on Friday night, get right back to it with their first visit to Las Vegas, wrapping up their back-to-back set of games before Christmas against the Golden Knights.

The Caps, who had a four-game winning streak snapped in the loss to the Coyotes, are still no strangers to success, having won more than 100 games over the previous two seasons and Presidents Trophies in each as the top team in the standings in the regular season.  For the Golden Knights, though, everything is new.  Even their unprecedented run of success to open their inaugural season.

In the here and now, Vegas comes into this game not having played since beating the Tampa Bay Lightning at home, 4-3, on Tuesday.  The win extended the Golden Knights’ streak of games earning points to eight (7-0-1).  In that eight-game run they outscored opponents by a 27-19 margin, not including Gimmick goals.  And they have spread those 27 goals around, 14 different skaters sharing in the good fortune.

Erik Haula and James Neal lead the club in goals scored in that eight-game points streak with five apiece.  Neal is a player with whom a lot of hockey fans are familiar.  Well-traveled goal scorer, among the dirtiest players in the NHL.

Neal, who has five goals in the eight-game points streak, leads the team overall with 17 goals.  No surprise there.  With three more goals he would hit the 20-goal mark for the tenth time in a ten-year career, the 31st player in league history to reach 20 goals in each of his first ten seasons.  If you don’t think that is a big deal, consider that there are 44 players in NHL history (including Neal, for the moment), who managed nine 20-goal seasons in their first ten NHL seasons.  He also has a knack for scoring game-winning goals, his 41 game-winners over his ten year career tied for 14th in that span, with Sidney Crosby and Eric Staal.  He currently holds the Golden Knight record for consecutive games with a goal to start a season (four), and he has those five goals in his last seven games.  As are many goal scorers, he can be streaky, and he is on a streak.  At least he hasn’t been suspended by the league since 2013 (what was his third suspension by the league), but he was fined $5,000 (the maximum at the time as supplementary discipline without requiring a phone hearing) in March 2014 for a cross-check to the head of Detroit’s Luke Glendening.  Neal is 10-5-15, plus-6, in 18 career games against the Capitals.

The casual fan might not have much familiarity with the work of Erik Haula, but this season could cause some to take notice.  Taken in the seventh-round (182nd overall) by the Minnesota Wild in the 2009 draft, the native of Pori, Finland, he is already pushing up against his career high in goals scored.  He has 13 in just 29 games this year, within shouting distance of the career-best 15 goals he had with the Wild last season.  Four of those 13 goals have been game-winners, tying the career high he set last year, and his four power play goals so far are twice as many as he had in his four seasons preceding this one.  Perhaps the goal scoring is a product of more responsibility, or vice versa, but he is averaging more than 17 minutes a game, three and a half minutes more than he averaged last season.  The odd part of his goal scoring is venue.  He has eight of his 13 goals in 16 road games and five of them in 13 games at T-Mobile Arena.  He comes into this game with a seven-game points streak (5-5-10, plus-3).  Haula has yet to record a point in six career games against the Caps and is minus-2.

For a club with as much success as the Golden Knights have had so far, they have certainly gone through goaltenders.  Five in all so far.  It was not supposed to be this way.  It was supposed to be Marc-Andre Fleury, three-time Stanley Cup winner with the Pittsburgh Penguins, who would be the early face of the franchise and provide an anchor in goal.  It started that way when Fleury won his first three decisions of the season, stopping 103 of 107 shots (a .963 save percentage).  Sure, two of those wins came against the woeful Arizona Coyotes, but still, it was a fine start for a new franchise.  Then the Golden Knights hosted the Detroit Red Wings on October 13th.

Mid-way through the second period in a 1-1 game, Detroit’s Anthony Mantha got position on defenseman Luca Sbisa and cut to the net.  As Mantha tried to get a shot off, Fleury dove to poke the puck off Mantha’s stick.  At the same time, Sbisa nudged Mantha just enough to alter his path across the top of the crease, and Mantha’s knee caught Fleury in the side of the head.  Fleury shook it off and continued, but obviously something was off.  Fleury allowed five goals on the last 17 shots he saw in a 6-3 loss.  It was the last game he played until December 12th, the victim of a concussion.  He has been sharp in his return, going 2-0-1, 1.95, .940.  In fact, take out those five goals on 17 shots after getting whacked in the head against Detroit, and his save percentage this season is .955.  Small sample to be sure, but he’s been what the Golden Knights have wanted when he has been available.  In 36 career games against the Caps, Fleury is 20-12-2, 2.60, .913, with three shutouts. 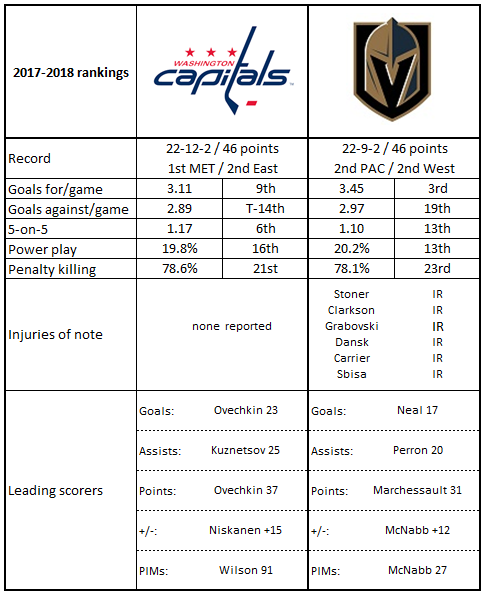 1.  Few teams spend more time sitting out penalty minutes than the Golden Knights.  Two in fact.  The 7:25 per game in penalty minutes charged to Vegas is bettered only by the Arizona Coyotes (7:13) and the Carolina Hurricanes (6:22, through Thursday’s games).  No team has fewer major penalties than the three taken by Vegas so far (tied with Carolina and the Chicago Blackhawks).

3.  The Golden Knights have also been impressive in one-goal games with the third-best winning percentage in such games (.733/11-2-2).

4.  Vegas can be solved late in games.  Only four teams have allowed more third period goals than the Golden Knights (41) through Thursday’s games: Edmonton (43), Minnesota (44), St. Louis (45), and Arizona (49).  Seems to be a Western Conference thing.

1.  The overtime loss to the Coyotes was the Caps’ first extra-time loss since dropping a 4-3 overtime decision to the Tampa Bay Lightning on October 9th.  It was just their second extra-time loss of the season, leaving them with a record of 6-2 in such games.

3.  T.J. Oshie broke a two-game streak without a point with his goal against the Coyotes on Friday.  He had not had consecutive games without a point since November 2-4.  Since then, he is 5-9-13 in 15 games.

It appears that Nate Schmidt, perhaps to the dismay of his fans in Washington, has found a home in the desert.  Taken in the expansion draft last summer, he is one of two defensemen to appear in every game so far this season (Colin Miller is the other), is second in points among defensemen with 15 (Miller has 19), and leads Vegas blueliners in ice time per game (22:36).  He is already within a goal of his career best (he had three last season with the Caps) and two points of his career high (17 points last year).  He has three power play assists with Vegas after not recording a power play point in 200 games with Washington over four seasons.  But there is a catch.  More Nate ain’t great.  Vegas is 4-5-1 in those games in which he skated more than 23:30, 8-1-1 in games in which he logged less than 21:30 in ice time.  And there is his shooting.  He scored a goal in his second game with the Golden Knights, and then went 29 games (and 37 shots) without scoring one until he found the back of the net in a 5-2 win over the Florida Panthers last Sunday (his first goal on home ice with Vegas).  This will be Schmidt’s first career appearance against his old club.

It has been a difficult first half of the season for Andre Burakovsky.  He got off to a slow start, going 1-3-4, minus-2, in nine games before sustaining an injury that would keep him out for 20 games.  Since his return he is 2-2-4, plus-1, in seven games, but he has yet to find a scoring rhythm.  He has two mulit-point games among the 16 he has played to date, but the flip side of that is that he has points in just five games overall.  It matters in that the Caps are 4-0-1 in those games.  He has been a bit more productive in road games than he has been at home, going 3-3-6, plus-2, in nine games away from Capital One Arena.  An odd feature of his record so far this year is that in seven games in which he skate at least 14:15 in ice time, the Caps are just 2-4-1.  This will be his first appearance against the Golden Knights, as it will be for all of the Caps.

As the saying goes, “what happens in Vegas, stays in Vegas.”  If you are a visiting NHL team, what you are striving for is to have what happens in Vegas be something to build on and carry over the next stretch of a long NHL season, or at least into the holiday break.  And so that’s the theme for this game.

Posted by The Peerless at 8:12 AM No comments: