The Peerless Prognosticator is ON THE AIR!!! -- Game 60: Edmonton Oilers at Washington Capitals, February 24th

If it’s a weekend, the Washington Capitals must be playing back-to-back games. For the second straight weekend and the third one this month, the Caps get a set of back-to-back games, starting with a visit from the Edmonton Oilers on Friday night.

It will not be as easy as it seems, given the opponent, for these are not your older brother’s defense-challenged Oilers, not even last year’s 27th-ranked scoring defense. This year’s edition of the Oilers has shaved almost a half goal per game off their goals allowed total, from 2.95 per game last season to 2.54 this year, ranked 7th in the league.

Edmonton comes to Verizon Center with a 5-2-0 record over their last seven games, outscoring opponents by a 20-18 margin (not including the shootout goal they scored in a 1-0 win over Montreal to start this run).Connor McDavid, as you might expect, has had his fingerprints all over the score sheet in those seven games with a hand in eight of the 20 goals (2-6-8). In his two seasons in the league, only Patrick Kane (1.17) and Sidney Crosby (1.14) have more points per game than McDavid (1.09). Only Erik Karlsson (0.77) has more assists than McDavid (0.75). If he continues to score at the pace he has so far this season, he could finish the year trailing only Sidney Crosby among active players who scored at least 140 points in their first two seasons without having reached their 21st birthday (Crosby had 222 points in his first two seasons; McDavid is on a pace for 139). In two career games against the Caps, he is 1-3-4, minus-1).

While McDavid leads the team in points over this recent 5-2-0 run, he doesn’t lead the club in goals. That honor is held, surprisingly enough, by defenseman Oscar Klefbom, who has three (3-3-6). The fourth-year player from Karlstad, Sweden, has already set career highs in goals (11) and points (26), and he is just three assists shy of tying his career best in assists (18). What he has done to ramp up his offensive production is increase his shot frequency – a lot. Two seasons ago he recorded a career high 98 shots on goal in 60 games. Through 61 games this season he already has 156 shots on goal. Only five defensemen in the league have more shots on goal, and of that group, only Brent Burns (27 goals on 242 shots) has more goals than Klefbom (11 goals on 156 shots). What Klefbom does not have is a career goal against the Caps. He is 0-2-2, minus-4, in four career games against Washington.

There is a familiar face among those posting good offensive numbers over the last seven games for the Oilers. Center Mark Letestu (1-4-5 in the last seven games) spent parts of his first three seasons with the Pittsburgh Penguins before moving on to Columbus and then to Edmonton last season. He has carved out a niche for himself as a reliable contributor as a bottom-six forward. In seven full NHL seasons he recorded double digits in goals and assists in six, and at least 25 points in each of them (including this season with 11-17-28), except for the 2014-2015 season (7-6-13) in which he was limited to 54 games by a groin injury. Letestu is 2-2-4, minus-3, in 13 career games against the Caps. 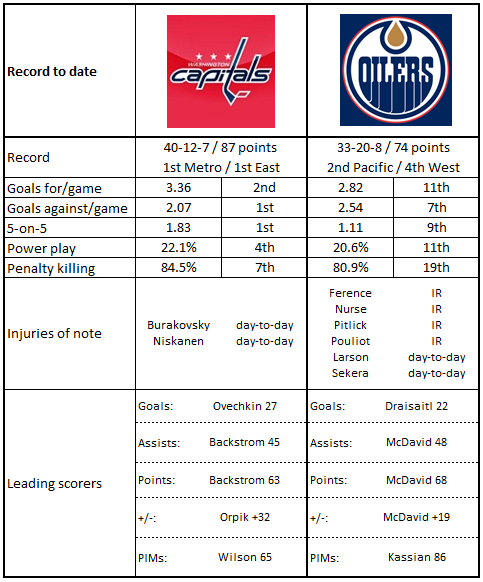 5.  Edmonton is a decent, though not great possession team. Adjusted for score, zone, and venue (by Corsica.hockey), their 59.75 Corsi-for at 5-on-5 is 12th in the league.

With Matt Niskanen – one of the team’s two right-handed defensemen – injured and on day-to-day status, the question becomes who will take over responsibility for manning the team’s second unit power play from the top of the offensive zone? Dmitry Orlov logged 1:47 in power play time in the 4-1 win over the Philadelphia Flyers on Wednesday night from which Niskanen departed. Orlov does get a surprising amount of power play ice time as it is (averaging 1:24 in power play ice time so far this season, the most he has averaged in any of his five seasons). He also has six power play points this season (1-5-6) more than his total in his previous four seasons (0-5-5). How he performs is not going to be the determinant in whether the Caps can keep up their blistering pace of the last two months, but a good effort in Niskanen’s absence won’t hurt. Orlov is 1-0-1, minus-3, in three career games against Edmonton.

Edmonton is the kind of team that can expose a team’s weaknesses if left to run a game at a pace of their choosing, which is to say, “up-tempo.” Being smart with the puck, especially at both blue lines, preventing quick transitions, forcing Edmonton to play a harder 200-foot game can grind them down. You know, the stuff a veteran team like the Caps should be able to manage. And hey, why not a new record, too?

The Washington Capitals snapped a two-game losing streak on Wednesday night, defeating the Philadelphia Flyers, 4-1, at Wells Fargo Center in Philadelphia. With the win, the Caps became the first team in the NHL to reach the 40-win mark.

Nicklas Backstrom opened the scoring for the Caps in the game’s seventh minute. T. J. Oshie was able to peel the puck off the right wing wall and away from two Flyers to Backstrom skating into the right wing circle. Then, using defenseman Radko Gudas as a screen, Backstrom snapped a shot past goalie Michal Neuvirth, off the crossbar, and in to make it 1-0.

Ten minutes later, the Caps worked the puck around the perimeter of the Flyer zone to Evgeny Kuznetsov on the right side. Kuznetsov stepped up and wristed a shot from the faceoff dot over Neuvirth’s left shoulder and in on a the short side to make it 2-0 at the 16:28 mark.

The Flyers halved the lead early in the second period when Brayden Schenn redirected a Brandon Manning drive from the left point past goalie Braden Holtby. The Caps restored their two-goal lead when Kuznetsov got his second goal of the game late in the period. Taylor Chorney smartly moved the puck up to Justin Williams exiting the Capitals’ zone. Skating the puck down the right side and into the Flyers’ end, Williams sent the puck across to Kuznetsov for a one-timer that appeared to surprise Neuvirth, sailing past him at the 17:59 mark to make it 3-1.

Oshie capped the scoring in the third period. Alex Ovechkin started the scoring sequence by picking up a loose puck in the neutral zone and sending it across to Nicklas Backstrom in front of the players benches. Backstrom skated the puck into the Flyers end and fed Ovechkin cutting to the net. Pulling the puck to his backhand, Ovechkin tried to sneak the puck around Neuvirth but was foiled. Oshie followed up and stuffed the puck in to make it 4-1 at the 14:43 mark.

-- Justin Williams also had a multi-point game.  His assist on Evgeny Kuznetsov’s first goal of game was his 400th career assist in the NHL.  He added another assist on Kuznetsov’s second goal for good measure.

-- Evgeny Kuznetsov had his second two-goal game of the season, the first coming in a 5-2 win over the New Jersey Devils on January 26th.  In the 2017 portion of the season, Kuznetsov is now 11-17-28, plus-15, in 24 games.  Only four players in the league have more points than Kuznetsov since January 1st.

-- The Flyers rode three waves – to start the game, mid-way through the second period, and over the last ten minutes of the contest – to a 54-46 edge in shot attempts at 5-on-5 (numbers from Corsica.hockey).  The second line of Kuznetsov, Williams, and Marcus Johansson took it in the teeth, going a minus-12 in shots attempts at fives.

-- John Carlson wins the all-you-can-eat buffet coupon.  In 27:37 of ice time, he had an assist, was plus-2, led the team with five shots on goal, had nine total shot attempts, a hit, two giveaways, a takeaway, and two blocked shots.

It was not the sort of game the Caps were playing before the bye week, but there was a sense of things coming together after the layoff.  Faceoffs and possession were an issue in this game, but of more immediate concern is the injury to Matt Niskanen that limited him to just over ten minutes of ice time for the game.  His “lower body injury” will be re-evaluated on Thursday.  It is the latest in a series of incidents that has tested the Caps’ depth and could necessitate the call-up of recently acquired Tom Gilbert as the Caps head into a set of back-to-back games this weekend.
Posted by The Peerless at 6:33 AM No comments: