Entry from the Operating Manual of the Obvious under “season, regular:”

“You’re not going to win every game.”

That’s about the best way to put it after the Caps’ 3-2 loss to the Toronto Maple Leafs last night, a game in which the Caps gave every indication that they would snare at least a point after falling behind the Leafs.

But Mats Sundin put an end to that at both ends of the ice in the last 30 seconds, first by scoring the game-winner off a rebound of an Alex Steen shot that found the only hole it could, under sprawling goalie Olaf Kolzig’s right arm. Then, with Nik Antropov off for tripping in the last six seconds and the Caps skating six-on-four, Sundin “won” the faceoff in the Leafs’ zone by firing the puck between the points and out of the zone, killing the remaining time.

Before all that, it was a somewhat disjointed effort by the Caps with some iffy play at the most inopportune times. In a game where the home team had three goals, it could have been worse. The defense didn’t have an especially good game playing defense, as it seemed they were in poor position in too many instances (not the least of which was on the game winner when both defenseman had backed almost all the way to the top of the circles by the time Antropov, carrying the puck, reached the blue line) – there was too much free ice given to the Leafs to skate.

Milan Jurcina and John Erksine were the exceptions to the rule, making the Leafs
pay with some big hits. On the other hand, Shaone Morrisonn and Mike Green found themselves caught a little too far up in the defensive zone when the Caps could not clear, and Chad Kilger was left behind them to deflect a long drive by Anton Stralman past Kolzig for the game’s first goal. It was Morrisonn and Green victimized again in the second as Green lost his footing behind the Washington net, and the Caps found themselves trying to catch up on the play until Steen fired the puck past Kolzig.

For the Caps, the Alexes each netted a goal, Ovechkin pouncing on a puck at the edge of the right wing circle and snapping it past goalie Vesa Toskala, and Semin with a nifty deke and backhand past Toskala to tie the game late in the third. But it wasn’t enough on a night when Washington dominated the territorial aspect of the game, but played just poorly enough in their own end to let the Leafs escape with the extra point.

From the “woulda-coulda-shouda” file…a win would have drawn the Caps to within a point of Carolina for the top spot in the Southeast with three games in hand. So, this has to be filed under “lost opportunity.”

The guys who had been making some noise on the score sheet lately were pretty quiet. Nicklas Backstrom saw his three game scoring streak (1-8-9) come to an end, although he did win nine of 13 draws. Tomas Fleischmann, with points in four of his last six games (1-5-6) was held off the score sheet as well. Mike Green, with 14 points in his last ten games (6-8-14), was held scoreless and was -2 – his third “minus” game in his last four.

Tom Poti – usually a minutes eater – managed less than 20 minutes of ice time for the first time since New Year’s Day (when he was injured in a game against Ottawa), in part because he spent six minutes in the box on three minor penalties.

And while the Caps took four minors (Steve Eminger had the other) resulting in three power plays for the home team, the Caps killed all three man-disadvantage situations, the first time they’ve held a club without a power play goal in the last four games, and only the fourth time in the last 12 games.

The Caps’ power play was no better – oh-for-four (including that abbreviated six second power play to end the game) – ending a four-game streak with at least one power play goal.

Quintin Laing had more shots on goal (one) than blocked shots (none).

The Caps had 32 shots on goal, and Alex Ovechkin had eight of those, but only Tomas Fleischmann and Matt Pettinger were the only Caps not to register a shot on goal.

After Ovechkin and his eight shots, know who tied for second in shots?...Well, yeah, there was Alexander Semin with three, which you would expect. But there were Matt Bradley and Milan Jurcina, who you wouldn’t.

Shaone Morrison took only six shifts and 3:55 in the third period…Eminger took ten shifts and 5:55. We’re thinking Morrisonn’s foot was acting up…and Eminger was one of the defensemen out there (with Poti) on the game-winner.

Speaking of the game-winner, it was Sundin's 544th goal of his career, tying him with Maurice Richard.


At least there was this... 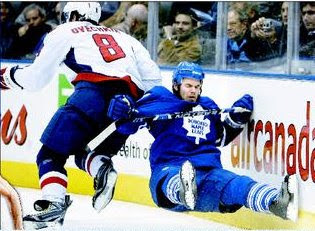 That’s got to be the thought foremost in the minds of Caps Nation for the rest of the year. A win tonight stops the bleeding, and it would ensure that the Caps finish above .500 at the All-Star Break. Not a bad place to be, considering where the Caps were when we sat down to a turkey dinner last November.
Posted by The Peerless at 6:16 AM 1 comment: