The Peerless Prognosticator is ON THE AIR!!! -- Game 65: Capitals at Blue Jackets, March 3rd

The Washington Capitals enter the post-trading deadline home stretch of the season on Tuesday night when they visit the Columbus Blue Jackets at Nationwide Arena.  The Caps will be looking to build on their 4-0 win over the Toronto Maple Leafs on Sunday, while the Blue Jackets will be checking another game off the calendar of what has become something of a lost season.

The Caps have lost three straight games against Metropolitan Division opponents, but have a 2-1-1 record against the Blue Jackets this season.  This contest will wrap up the season series between the two teams.

Columbus (26-32-4) comes into the game in free fall, having lost six in a row (0-5-1), scoring just 11 goals over those six games while allowing 22.  It is a far cry from last season at this time, when the Blue Jackets were 32-25-5 after 62 games and tied for third in the Metropolitan Division with the New York Rangers.

The Blue Jackets might have equaled that mark of last season had they won instead of lost those last six games.  Scoring has been an issue.  The 11 goals have been spread among nine players, Nick Foligno and Marko Dano the only Blue Jackets with two goals in the six-game losing streak.  Foligno, one of two Blue Jackets named to the 2015 All Star Game roster, has had a rather consistent season.  His 24 goals in 60 games leads the team, and he has six in 16 games since the All Star break.  He is 4-3-7 in four games against the Caps this season and is 6-10-16 in 22 career games against Washington.

Dano was a 27th overall pick of the Blue Jackets in the 2013 entry draft who has split time between Columbus and the Springfield Falcons of the AHL.  With Springfield he was 10-8-18 in 37 games.  He has spent two separate stints with the parent club this season and is 3-3-6 in 16 games overall.  He has not yet faced the Capitals in his brief career to date.

Columbus was active in the run up to and on trade deadline day, moving defensemen James Wisniewski and Jordan Leopold, injured forward Nathan Horton, and a third round draft pick in separate deals for Rene Bourque, William Karlsson, David Clarkson, Justin Falk, and a pair of draft picks.  Clarkson will be looking for a new start after a two disappointing seasons in his hometown of Toronto.  In 118 games with the Maple Leafs over those two seasons he had just 15 goals, only one of them in his last 25 games with Toronto.  He will be trying to regain the scoring touch that allowed him to record 45 goals in 128 games over his last two seasons in New Jersey before signing a seven-year, $36.75 million deal with Toronto.  Clarkson has yet to light the lamp in two games with his new club.  He is 5-3-8 in 27 career games against the Capitals.

Here is how the teams stack up against each other overall: 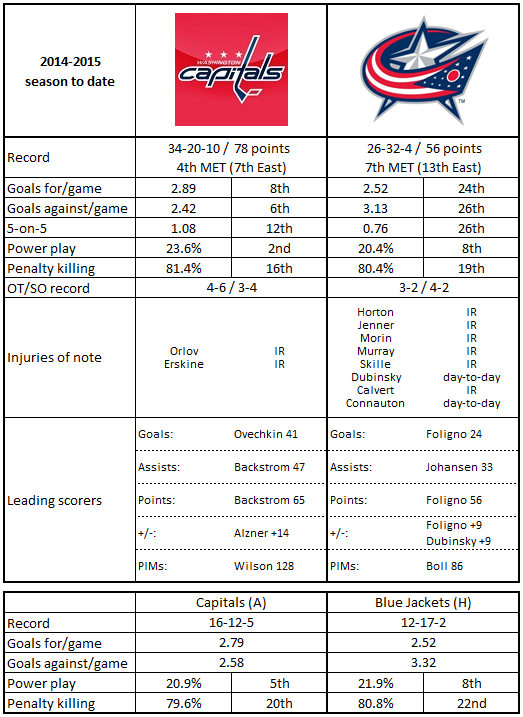 1.  Columbus has a fairly efficient power play at home this season (21.9 percent/8th in the league), but they do not get to unleash it as often as they might like.  Only six teams have had fewer power plays on home ice than the Blue Jackets (96).

2.  On the other hand, Columbus probably spends too much time on the other side of the special team divide on home ice.  Only five teams have been shorthanded at home more often than Columbus (104).

3.  The Blue Jackets tend not to finish games well.  The 70 goals they have allowed in the third period this season is the fourth-highest total in the league.  Perhaps it contributes to their 27th-ranked 1-25-1 record when trailing after two periods.  No team has earned points in fewer games when trailing after 40 minutes (tied with Buffalo with two such games).

1.  Last season the Caps took nine bench minor penalties, a small indicator of a lack of attention to details.  This season they have only four bench minors.  Only four teams have fewer (Columbus, San Jose, Nashville, and Edmonton).

2.  Three 5-on-3 power play goals might not sound like a lot, but that number for the Caps ranks fourth in the league, behind only Pittsburgh, Colorado, and the New York Islanders.  They have allowed only one such goal; only five teams have allowed fewer (Nashville, Boston, Ottawa, San Jose, and Arizona).

The Columbus Blue Jackets lead the NHL in man-games lost to injury (392 as of February 28th).  None of the missed games have been more important to the Blue Jackets’ fortunes this season than the 17 missed by Sergei Bobrovsky since he suffered a groin injury against the Winnipeg Jets on January 21st.  Columbus was struggling even with Bobrovsky in the lineup, but in his absence the Blue Jackets have gone 6-10-1 and have sunk to 13th in the Eastern Conference while allowing 53 goals in those 17 games.  Bobrovsky had been having a very uneven season leading up to his injury, having allowed one or fewer goals eight times in 33 appearances, but allowing four or more ten times.  He could return against the Caps, against whom he is 4-1-3, 3.06, .908 in nine career appearances.

Washington needed a scoring line winger; they traded a pair of draft picks to Calgary for Curtis Glencross.  Are those two facts related?  As the saying goes, “time will tell.”  What we do know is that Glencross has been a reasonably reliable 20 goals-per-year sort of player (he averages 22 goals per 82 games over almost 500 NHL games).  He has done so as an efficient sort of shooter, bringing a career 14.5 percent shooting rate to Washington over his career.  Since his first full season in 2007-2008 he ranks 20th among forwards in shooting percentage (minimum: 250 games played).  While his percentage slipped this season (10.3 percent through 53 games), it is something that argues for his being tested on a scoring line for his new club.  He is 6-6-12, minus-3, in 23 career games against Columbus.

Winning in Columbus has been a challenge for the Caps.  They split two games at Nationwide Arena this season, winning a 5-4 overtime decision on December 18th and losing, 4-3, on January 27th.  Washington has not won in regulation in Ohio since they took a 4-2 decision on New Year’s Eve 2011.  They are 3-4-1 in their last eight games in Columbus.  The Blue Jackets are a team in rapid decline this season, though.  In their six-game losing streak, five of the losses have been by more than one goal.  Even the potential return of Sergei Bobrovsky in goal is unlikely to turn things around for a club that is looking toward next season.  This is another case, as was Toronto on Sunday, of a team that the Caps need to deal with expeditiously and move on.