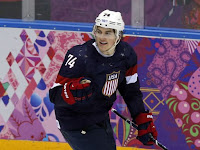 “Change in all things is sweet.”
-- Aristotle

“The Champ” is a 1979 remake of a 1931 film about an alcoholic boxer who reforms for the sake of his young son.  In the 1979 telling of the story, the alcoholic boxer is a former champion scraping together a living to support his young son, “T.J.”  It was a movie – and the young boy a character – that appealed to a young mother in Washington state.  “T.J.” became the name by which her son – Timothy Leif Oshie – would be known.

T.J. grew up to be a quite a hockey player – a high-school standout and a three-year star for the University of North Dakota.  He would be the 24th overall pick of the 2005 NHL entry draft, selected by the St. Louis Blues, the only professional hockey organization for which he would play, the last seven of which were spent playing for the parent club in St. Louis.

In those seven seasons in St. Louis, Oshie appeared in 443 regular season games, tied for 22nd in Blues franchise history.  His 110 goals ranks 23rd in Blues history, and his 310 points ranks 16th.  He is one of a dozen players in Blues history to record at least 100 goals and at least 200 assists.  While it is a considerable body of work, Oshie, who will turn 29 in December, is still in the prime of his career.

Despite that body of work, Oshie was the subject of trade rumors, part of a general feeling that a shakeup was needed for the club at the end of the 2014-2015 season as well as a need to get more size into the lineup.   It was not an especially spectacular season for Oshie, either by his career standards or in the context of his rankings with the club.  His 19 goals slipped a bit from his career high (21) set the previous year, as did his 55 points (five less than his career high in 2013-2014).  He was fifth on last year’s Blues team in goals and points.

He was, however, a versatile player, the only Blues forward to average at least 15 minutes of even strength ice time, two minutes of power play ice time, and a minute of penalty killing time per game.  He also had a knack for success in the freestyle competition.  His 4-for-11 performance in the shootout was not his best over his seven-year career (he finished tied for 18th in goals scored and tied for 12th (minimum: 10 attempts) in shooting percentage), but it continued a remarkable run.  Among players with at least 30 attempts over the last seven seasons, Oshie is fourth in goals (31) and second in shooting percentage (52.5 percent).

While the shootout statistics carry less weight going forward with changes in the overtime format for 2015-2016, there was enough in Oshie’s game to make him attractive to a club in similar circumstances.  The Blues found that club in the Washington Capitals, whose recent playoff history of “one and done” or “two and through” was jeopardizing their chances of winning a championship in the Alex Ovechkin/Nicklas Backstrom era of the club.  The Caps traded Troy Brouwer, goaltending prospect Pheonix Copley, and a 2016 third-round draft pick to the Blues for Oshie, who has two more years on his current contract with a $4.5 million average annual value.

Scoring line forwards are supposed to be difference makers, and Oshie was that for the Blues last season.  St. Louis was 14-3-0 when Oshie scored a goal (37-21-7 when he did not), 26-6-1 when he recorded a point (25-18-6 when he did not).  As a possession player, Oshie has never been below 50 percent, Corsi-for at even strength, in any of his seven seasons.  He was over 53 percent in close-score situations in four of his seven seasons and never below 49 percent (numbers from war-on-ice.com).

Since 2009, when he made his first appearance for the Blues in the postseason, Oshie is 11th in points per game for the club (minimum: 15 games), behind the decent, if unspectacular, Vladimir Sobotka, and Chris Porter, who has a grand total of 27 career points in 173 regular season games.  Among players appearing in at least 15 postseason games over that span, only Barrett Jackman (minus-17) had a worse plus-minus for the Blues than Oshie (minus-12).  It would be fair to think Oshie’s playoff performance left something to be desired.

The Big Question… Will he be “TJFO?”

Folks who followed Caps fans reactions to Troy "TFB" Brouwer’s misfirings in the postseason will likely figure out what “TJFO” means in short order.  Whether Oshie plays on the top line with Nicklas Backstrom and Alex Ovechkin, or on the second line with Evgeny Kuznetsov and (perhaps) Marcus Johansson, it seems possible, if not likely, that he will approach career bests in his offensive numbers (21-39-60, plus-19, in 2013-2014).  That is not why he is a Capital.  Well, not the only reason.

Oshie is expected to perform better in the postseason than he has to date (5-4-9, minus-12, in 30 career playoff games), or Capitals right wingers of recent vintage, for that matter.  Last season the Caps got four goals out of right wingers in 14 post season games, three of them from the since departed Joel Ward.  In 2013 the Caps got three goals from right wings in seven games.  In 2012 it was five in 14 games.  They year before that, it was three in nine games.  You get the idea.

The Capitals have not had as much production out of the right wing position as they might have liked in recent years (the Alex Ovechkin right wing experiment notwithstanding), particularly in the postseason.  Joel Ward departed in free agency, to be replaced by Justin Williams, and Troy Brouwer was sent to St. Louis for Oshie.  The acquisitions of Williams and Oshie reflect a certain amount of urgency to make a deep postseason run while Ovechkin and Nicklas Backstrom are still in their prime.

The Oshie for Brouwer trade can be one of those win-win kinds of deals.  St. Louis felt the need to add some size to their forward squad, while the Caps felt the need to add a deeper skill set on the right side.  Last season Oshie spent the vast majority of his 5-on-5 ice time (1,038 minutes) with David Backes (746 minutes) and Alexander Steen (565 minutes), two very good players (numbers from stats.hockeyanalysis.com).  They helped Oshie to 16 even strength goals and 26 even strength assists.  In Washington he could start the season with Evgeny Kuznetsov and Alex Ovechkin on the top line, with Nicklas Backstrom sliding into the middle when he is ready to go.  It could be an upgrade in terms of production opportunities, but the object of the exercise is ultimately how Oshie and his linemates mesh in the postseason.  Success would make the change of scenery this summer sweet, indeed, and give Oshie the opportunity to fashion a happier ending as “The Champ.”