The Washington Capitals salvaged their five-game home stand with a 2-1-0 week after losing the first two games of the home set.  Not that it was all unicorns and accordions, as we will see in the third edition of “That Was The Week That Was.” 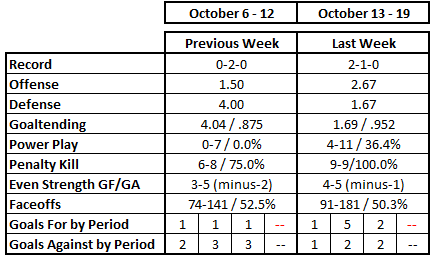 It was the first winning week for the Capitals this season after a pair of sub-.500 weeks.  After beating the Edmonton Oilers, then losing to the New York Rangers, it was looking as if the Caps could only beat teams from Alberta (their other season win coming against the Calgary Flames in Week 1).  Then, they closed the week with an impressive 4-1 win over the Columbus Blue Jackets on Saturday in the first Metropolitan Division meeting of the two clubs.  The week might look more impressive than it was in this respect.  All three teams the Caps faced were sub-.500 teams when they met, a combined record of 5-11-1.  However, there are no standings points awarded for strength of schedule; two points is two points, and four is better than none, which is what the Caps had in the previous week.

It was “deuces are wild” for the Caps this week.  Of the eight goals scored by the club in three games, four players scored two apiece: Joel Ward, Brooks Laich, Troy Brouwer, and Alex Ovechkin.  For Ward, Laich, and Brouwer those goals were their first of the season.  For Ovechkin is was the continuation of a hot run that saw him finish the week with seven goals in his first eight games of the season and 29 goals in his last 29 regular season games dating back to last season.

On the helper side, the news was that Nicklas Backstrom had four assists, giving him eight for the season (tied for fifth in the league) and giving him 29 in his last 29 regular season games.  Then there was Martin Erat.  The erstwhile fourth liner was moved up to the second line on the left side with Laich and Brouwer in Saturday’s game against Columbus.  He made the move look good with three assists that left him tied for fourth on the club.

It’s hard what to make of this week as far as the defense is concerned.  The Caps allowed teams to fire 91 even strength shots on goal.  That is a lot of rubber finding its way to the Capitals’ net.  On the other hand, of the five goals scored against the Caps for the week, two were scored in the last five minutes when the decision was no longer in doubt.

And that is where we get to the goals scored against by player.  It might seem disturbing on one level that John Carlson was victimized more than any defender, on ice for three of the five goals against for the week.  But Carlson was on ice for those two goals in the last five minutes.  He got caught once covering Jeff Petry while his partner, Steve Oleksy, was defending behind the Caps net.  Carlson could not get back to cover Will Acton, left alone at the doorstep for a tap-in.  The other certainly was not his fault, covering Columbus’ Cam Atkinson driving the net while Artem Anisimov was filling a late lane to bury a drive past goalie Braden Holtby. Circumstance seemed to be Carlson's problem this week.

What a difference a week makes.  Actually, it has been something in the making for Braden Holtby.  Coming into this week Holtby was 1-3-0, 4.03, .873 for the season.  For the week he was 2-1-0, 1.69, .952.  What is more amazing is his early game netminding.  He had a save percentage in the first period of games of .969 for the week and .956 in the second period (allowing both goals for the week to the New York Rangers that did him in).  He had a save percentage of .926 in the third period, but again, both goals allowed were scored in the last five minutes when the decision was no longer in doubt.  Another week like this, and he will climb off the second page of the NHL.com goalie statistics.

Half of the Caps’ eight goals for the week were scored on the power play.  That is a recurring theme this year; half of the 20 goals they scored so far are power play goals.  The Caps spread things around, scoring-wise.  Three different players shared the four goals, and it was the unexpected contribution of Joel Ward accounting for two goals (Troy Brouwer and Alex Ovechkin had the others).  Eight different players had power play points, six of them contributing assists.  Nicklas Backstrom recorded assists on three of the four goals for the week.  Washington was quite efficient for the week, scoring four goals on 14 power play shots in 11:22 of power play time.  It would have been more so but for the fact that the Caps drew a blank on six power play shots (their high for the week) against the Rangers and Henrik Lundqvist.  The goalie was the team’s best penalty killer in that one.

All of a sudden the team that can’t kill penalties is sixth in the league in penalty killing.  That is what going 9-for-9 for the week will do.  The Caps are now ten for their last ten in killing penalties, dating back to the third period of their 5-1 loss to Colorado on October 12th.  It was an efficient as well as an effective week.  The Caps allowed only 12 shots on goal in 14:37 in penalty killing time, Braden Holtby turning all of them aside.  His shorthanded save percentage jumped from .813 to .893 for the season.

This is where the Caps continue to struggle.  Two games in which they score power play goals, two wins.  The game in which they do not score a power play goal, a loss.  The Caps have not yet found a way to cobble together enough even-strength effectiveness to make up for the nights when the power play is not clicking (or they are playing against Henrik Lundqvist).  They “won” only the game against Columbus on Saturday when they outscored the Blue Jackets, 2-1.  Those 91 shots against at even strength put a lot of pressure on goaltending.  Worse was that the Caps were outshot, 91-67, at even strength with more than half of the Caps’ even strength shots for the week (34) coming against Columbus.

It was a tightly fought battle in the circle this week.  It was, though, the third straight week in which the Capitals came out above the 50 percent mark.  It might have been a better week had not the Caps fallen down against the Blue Jackets.  They could manage only seven wins in 21 tries in the offensive end and seven in 16 tries in the defensive end against Columbus.  If there was a soft spot here it was Nicklas Backstrom and Eric Fehr in the offensive zone.  Combined, Backstrom (7-for-19) and Fehr (3-for-10) went 10-for-29 on offensive zone faceoffs (34.5 percent).

Consider Week 3 progress.  Last season the Caps did not realize their first winning week until Week 4.  And even though the five-game home stand was disappointing (2-3), the Caps did salvage two of the last three contests.  The biggest thing to come out of the week, other than the two wins, might be the lineup juggling that head coach Adam Oates performed for the Columbus game to end the week.  As noted in the post-game review, Oates made nine distinct lineup switches:

It had the intended effect.  Erat had three assists.  Laich had a goal and won 13 of 25 draws from the center position.  The second line finally looked like a scoring line.  The object now will be to take this on the road and see how it plays over the next two weeks.

Posted by The Peerless at 10:32 AM No comments: