Today, Americans honor those who have made the ultimate sacrifices for a way of life we sometimes, too often in fact, take for granted. Yesterday, one of America's great institutions -- the United States Marine Corps -- celebrated its 234th birthday.

For those who have made their sacrifices for us, and for those who do so today, wherever they may be, thank you.

Whereas it has long been our customs to commemorate November 11, the Anniversary of the ending of World War I, by paying tribute to the heroes of that tragic struggle and by rededicating ourselves to the cause of peace; and

Whereas in the intervening years, the United States has been involved in two other great military conflicts, which have added millions of veterans living and dead to the honor rolls of this Nation; and

Whereas the Congress passed a concurrent resolution on June 4, 1926 (44 Stat. 1982), calling for the observance of November 11 with appropriate ceremonies, and later provided in an act approved May 13, 1938 (52 Stat. 351), that the eleventh of November should be a legal holiday and should be known as Armistice Day; and

Whereas, in order to expand the significance of that commemoration and in order that a grateful Nation might pay appropriate homage to the veterans of all its wars who have contributed so much to the preservation of this Nation, the Congress, by an act approved June 1, 1954 (68 Stat. 168), changed the name of the holiday to Veterans Day:

Now, Therefore, I, Dwight D. Eisenhower, President of the United States of America, do hereby call upon all of our citizens to observe Thursday, November 11, 1954, as Veterans Day. On that day let us solemnly remember the sacrifices of all those who fought so valiantly, on the seas, in the air, and on foreign shores, to preserve our heritage of freedom, and let us reconsecrate ourselves to the task of promoting an enduring peace so that their efforts shall not have been in vain.

I also direct the appropriate officials of the Government to arrange for the display of the flag of the United States on all public buildings on Veterans Day.

In order to insure proper and widespread observance of this anniversary, all veterans, all veterans' organizations, and the entire citizenry will wish to join hands in the common purpose…

Posted by The Peerless at 8:17 AM No comments:

The Peerless Prognosticator is ON THE AIR!!! -- Caps vs. Islanders, November 11th

It’s Veterans Day here in Washington, and the Capitals are in the middle game of a three-game home set, taking on the New York Islanders. This being a holiday, when many offices have the day off, we might expect to see a number of groups taking advantage of the occasion to take in a hockey game. We met one such group in town to catch a hockey game…

Welcome to Washington. I understand you folks are from out of town to watch the game today, and you are… 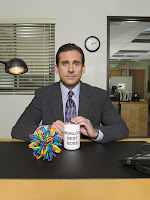 Glad to meet you. And what group are you with?

“We’re from the Dunder-Mifflin Paper Company. In Scranton, Pennsylvania.”

Are you folks hockey fans?

“Not really… we have company tickets to Baby Pens games.”

That’s a shame, but you’re down here in force for a Capitals game. I would have thought you’d head out to Pittsburgh for a game.

I can understand that.

“You know, on our way down here, I read some of your gameday stuff.”

“Well, I swallowed all your ideas. I'm going to digest them and see what comes out the other end.”

Well, Verizon Center has facilities for that sort of thing… I imagine your staff appreciates your bringing them down for an outing like this.

Ok… I take it you’re doing pretty well in these tough times to be able to sponsor a trip for your staff.

“Yes, but what is the single most important thing for a company? Is it the building? Is it the stock? Is it the turnover? It's the people. The people. My proudest moment here wasn't when I increased profits by 17 percent, or cut expenditure without losing a single member of staff. No, no, no, no. It was a young Guatamalan guy, first job in the country, hardly spoke a word of English, but he came to me and he went ‘Mr. Scott, will you be the Godfather to my child? Wow. Wow. Didn't work out in the end. We had to let him go. He sucked. Sort of like Nylander.”

Well, what do you expect, they’re from Scranton. But the game they’re here to see will be the third installment of the four-game season series between the Caps and the Islanders. The teams have split the two games played to date, both of them going to overtime and both won by the road team. As if it needs saying at this point, the Islanders have outperformed expectations. At 6-6-5, they sit on the cusp of the top-eight in the Eastern Conference. Their numbers compare to the Caps as follows: 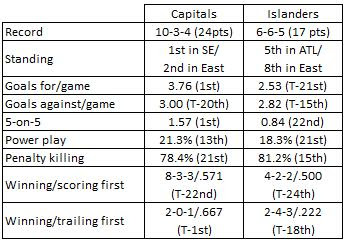 New York is 5-2-0 in their last seven games. In those seven games, 13 different players have the 22 goals scored by the Islanders, and 19 different players have points. While balance seems to have been the key, the Islanders have been led by the future and the past in this stretch. As for the future, John Tavares – last June’s top overall pick in the draft – is tied for the team lead in points in this 5-2-0 run (2-4-6, tied with Jeff Tambellini at 3-3-6). Tavares’ performance in these last seven games has catapulted him into a tie for the club lead in points (5-8-13, tied with Matt Moulsen at 7-6-13). If you are looking for a benchmark for Tavares’ performance so far, consider that he has 13 points in 17 games. Last year’s top draft pick phenom, Steven Stamkos, did not record his 13th point until his 32nd game.

As for the past, that would be Brendan Witt. For those of you not paying attention, Witt had a two-goal game, including the game-winner, against Edmonton on November 2nd. Those were goals 24 and 25 of Witt’s career, spanning 865 games. They broke a 92-game streak without a goal dating back to January 22, 2008, at Carolina. It was his first multi-goal game in the NHL and his first multi-point game since March 26, 2002, at Buffalo. He now has as many goals – two – as his more celebrated teammate on the blue line, Mark Streit. Why it is that the earth didn’t stop spinning on its axis as a result of this turn of events is a mystery.

Speaking of Streit, he is somewhat slow out of the box. After 17 games last year, on his way to a 16-40-56 season, he was 4-8-12. So far this season, he has only those two goals and five assists to go along with them. He has only one goal since opening night, but that one was the game-winner in the 4-3 overtime win over Washington on October 30th. In 13 career games against the Caps he is 3-6-9.

And now we ask, is the spell broken? In his first 21 career games against the Caps, Jon Sim had 11 goals and 19 points. He was “Jon Gretzky” against the Caps. But since joining the Islanders, Sim has but a single point – a goal – in five games against Washington. He has only one goal this season, back on October 10th against Boston.

For the Caps it could be interesting in goal. Jose Theodore got both starts against Florida last weekend in a back-to-back series. He came into the season with a sparkling career record against the Islanders (14-9-1, 1.89, .936 and five shutouts). But in two appearances this year, he is 1-0-1, 2.96, .900. Semyon Varlamov has only two appearances in the Caps’ last eight games, but he might be saved for Friday’s game against Minnesota, the first of another back-to-back (the Caps play in New Jersey on Saturday).

2. Win the battle of attrition. The Caps are missing Alex Ovechkin. Boyd Gordon is still out with a back problem. Mike Green and Jeff Schultz are dinged up and are questionable. The Islanders will be missing Doug Weight (out 4-6 weeks with the always mysterious “upper body” injury) and Radek Martinek (out for the year with a knee injury). They also count Trent Hunter among the injured (although he might return for this one), and Kyle Okposo has been laid up with the H1N1 virus. You would think the Caps’ superior depth would be a factor – it had better be.

This game has the potential of having a team letting itself get all fat and happy after pounding five goals past Scott Clemmensen in the last 20 minutes of a 7-4 win over Florida on Saturday. But tonight’s opponent – the Islanders – has allowed only 13 goals in their last seven games. And the Islanders have played the Caps tough, not just this year, but going back to the 2007-2008 season. Four of the last five games have been one-goal affairs, and the fifth featured an empty net goal by Nicklas Backstrom in a 5-3 win. Don’t expect an early end to the competitive portion of this one…