Washington Capitals: That Was The Week That Was - Week 22

If a week is not how you start, but how you finish, Week 22 was a good one for the Washington Capitals.  It started by getting blown out by a division rival, followed by a gritty win to try and build some positive momentum, and wrapped up with as complete a win as the team has had this season.  Perhaps it was the course correction the team needed to set it on the right path for the last five weeks of the season. 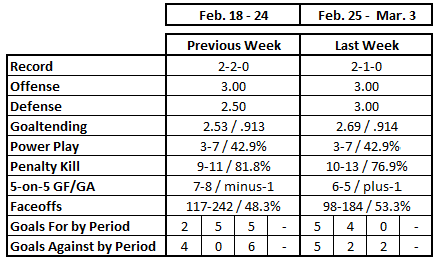 After marking time in Weeks 20 and 21 (3-3-2 overall for eight points in eight games), the Caps shook off a loss to the Columbus Blue Jackets to start the week to finish it winning consecutive games since sweeping a home-and-home series against Columbus a month ago.

The wins in Week 22 came on home ice, including the Stadium Series win over the Toronto Maple Leafs at Navy-Marine Corps Stadium, giving the Caps 23 home wins this season, one behind the trio at the top of the home win rankings – Vegas, Winnipeg, and Pittsburgh.

The Caps earned their 2-1-0 record with a week played entirely against Eastern Conference teams, so the result might have been foretold.  Washington has the best record of any Metropolitan Division team against the Eastern Conference at week’s end (25-12-5), although the Philadelphia Flyers (22-10-7) have three games in hand against the conference compared to the Caps. 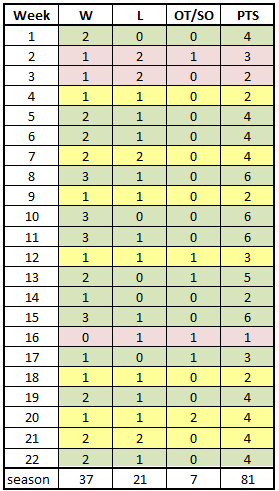 The Caps improved as the week went on, scoring-wise.  The team that looked like first-day-of-training-camp disorganized against Columbus on Monday ended the week firing on all cylinders in their 5-2 win over the Maple Leafs outdoors.

If you are looking at the week as that half-full/half-empty glass, you might say the Caps did it efficiently, scoring nine goals on 82 shots (11.0 percent).  On the other hand, there were just those 82 shots (27.3 per game).  It might say something that the Caps scored five goals on 34 shots in their highest shot-volume game of the week and that the Caps are 11-3-0 in 14 games in which they recorded 34 or more shots this season.

Individually, Evgeny Kuznetsov led the club in goals and points (3-2-5), followed in total points by Nicklas Backstrom (1-3-4) and John Carlson (1-3-4).  All three had three-point nights against the Maple Leafs to end the week, each of them going 1-2-3 in that contest.

Alex Ovechkin was the other Capitals with a multi-goal week, scoring the lone goal the Caps had against Columbus to open the week and potting one against Toronto to end it.  The latter goal was Ovechkin’s 40th of the season, the ninth time he reached the 40-goal mark in his career.  That ties him with Mike Bossy and Mike Gartner for fourth-most in NHL history, trailing Mario Lemieux (10), Marcel Dionne (10), and Wayne Gretzky (12).

Shots allowed has been an issue for the Caps this season, and seeing the volumes allowed drop from game to game in Week 22 was a welcome outcome.  The Caps allowed Columbus 35 shots in the 5-1 loss to open the week, the 23rd time this season that Washington allowed an opponent 35 or more shots on goal.  The Caps are 13-7-3 in those games.
However, in that game, the Caps allowed 16 shots in the first period in falling behind, 4-1.  Over the last eight periods of the week, the Caps allowed only 78 shots (one of them an empty-netter for a goal by Columbus), and only twice in those eight periods did the Caps allow more than ten shots on goal – 12 in the first period in the 3-2 win over Ottawa and 12 in the second period against Toronto to end the week.

However, it was a brutal week for the Caps in one respect.  Shot attempts-for at 5-on-5 were 120 for and 165 against.  Their minus-45 shot attempt differential was second-worst in the league for the week (Montreal: minus-56), as was their shot attempts-for percentage (42.09), barely edging Montreal (42.09).

On balance it was an okay week for Capitals goaltending.  A closer look, and it was unsettled.  Braden Holtby opened the week by continuing his struggles, allowing four goals on 16 shots in 20 minutes of work against Columbus before yielding to Philipp Grubauer.  It was not all Holtby, as the Caps were having trouble defending air in front of him, but Holtby wasn’t – and hasn’t been – sharp.  It was his sixth loss in a row and the second time in those six games that he was pulled.  Holtby came back to provide a solid effort in stopping 27 of 29 shots against the Maple Leafs in the 5-2 win to end the week, ending that personal six-game losing streak.  One hopes that weeks of a 4.53 goals against average and a .867 save percentage – his numbers in Week 22 – are at an end.

Grubauer continued a run of strong play on his own.  Coming in relief of a game already out of hand is a chance to pad numbers, but Grubauer was solid against the Blue Jackets in stopping all 18 shots he faced.  He was sharp against Ottawa in the middle games of the week, stopping all 12 shots he faced in the first period to allow the Caps to get to the first intermission with a lead and allowing just two goals on 30 shots overall.  When the week was over, one could look back over his last 20 appearances and see an impressive record – 8-5-2 (five no-decisions), 1.95, .936, with one shutout.

A second straight week converting three of seven power play chances continued a strong power play run for the Caps.  Over the last six weeks, Washington is 15-for-45 (33.3 percent) over 18 games.  Over those six weeks, only the Vegas Golden Knights have a better power play (18-for-51/35.3 percent), but only three teams had fewer chances to put it on display (Detroit: 44; Edmonton: 37; and Pittsburgh: 36).

John Carlson led the team in power play points, recording assists on all three goals with the man advantage.  The goals themselves were scored by three different players – Nicklas Backstrom, Evgeny Kuznetsov, and Alex Ovechkin.  The goal by Ovechkin was his 12th power play goal of the season, ranking him fourth in the league in that category.

The Caps had their success as a product of accuracy more than efficiency.  Eight shots in 11:02 of power play ice time is not a particularly noteworthy result, but scoring three goals on those eight shots (37.5 percent).  That is. 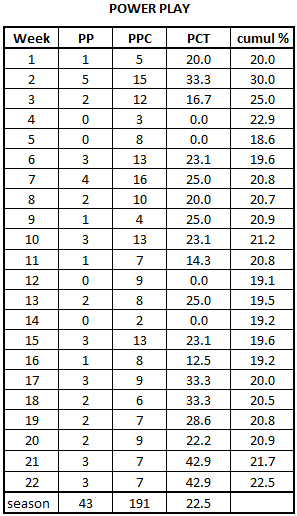 What the power play taketh, the penalty kill gave away, the week ending minus-1 on special teams scoring (the Caps also allowed a shorthanded/empty net goal).  It was not even a case of the Caps being peppered with shots on power plays.  They allowed only 11 shots on goal in 19:10 of shorthanded ice time.  The three goals were all scored from long range, but on all of them – Artemi Panarin and Seth Jones for Columbus, and Mike Hoffman for Ottawa – it was a case of opponents doing a good job of taking the eyes away from the goaltender.

Still, we are left with the unsettling notion that this penalty kill is the Caps’ penalty kill this season.  Week 22 was the 12th week in which they finished under 80 percent for the week, and in only three weeks in the last 21 have the Caps finished the week over 80 percent for the season to date.  For the Caps, the key might have to be limiting opportunities, but at the end of Week 22, they were tenth in the league in power play chances allowed. 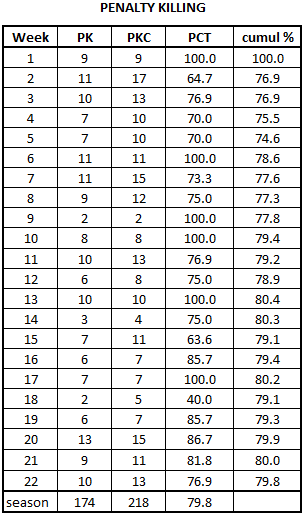 The week in the circle might be thought of as “the good and the bad.”  Fortunately for the Caps, “the good” came from those who took the highest number of faceoffs.  Nicklas Backstrom (32-for-58/55.2 percent) and Jay Beagle (34-for-42/81.0 percent) were a combined 66.0 percent.  Beagle was spectacular, to the extent such an adjective can be applied to one of the routine elements of the game.  By himself, going 23-for-28 (82.1 percent) he dragged the Caps over 50 percent in the defensive end.  Another reflection of his specialty in that area – defensive zone draws – is that he had only five offensive zone faceoffs for the week.  That he won four of them (80.0 percent) should not escape notice.  He was also on top of his game at even strength, winning 29 of 35 draws (82.9 percent).

On the bad side, both Lars Eller and Evgeny Kuznetsov finished under 40 percent for the week, Kuznetsov just managing 30 percent (9-for-30).  The pair was just 20-for-61 at even strength (32.8 percent).

If there was an odd part to the week, and perhaps a feature of this team, it is T.J. Oshie on draws.  He took seven faceoffs in Week 22.  Six of them were on power plays (he was 4-for-6), the most power play faceoffs taken among the Caps.  In fact, while Nicklas Backstrom leads the team in power play faceoffs taken (67-for-129/51.9 percent), there is Oshie at 54-for-105 (51.4 percent), second-most on the club this season. 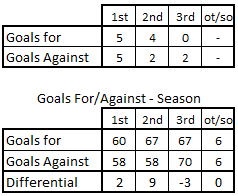 The Caps fought to a draw in first period scoring for the week, five goals scored and five goals allowed.  Consider that Columbus scored four of those goals in barely 18 minutes of the opening game of the week, and first period defense closed well.  The odd part of the week was in the third period scoring.  The Caps did not score a goal, and that is not altogether unsurprising.  In two of the games, the competitive portion of the contest was largely settled, the Caps trailing Columbus, 4-1, after 40 minutes, and then turning the tables by taking a 5-2 lead into the third period of their game with Columbus to close the week.  Add in that the Caps took a 3-1 lead into the third period of their game against Ottawa, holding on for a 3-2 win, and the lack of third period scoring was not surprising.

Disappointing might be another matter.  The Caps have had issues from time to time this season with taking their foot off the pedal.  It might have cost them against Ottawa, having to play the last 16:46 of that game nursing a one-goal lead and finishing with only seven third period shots on the Senators.  The Caps had a comfortable lead against Toronto going into the third period in the last game of the week, but not an insurmountable one, especially a team with as many weapons as the Maple Leafs.  The Caps managed only four shots on goal in the third period of that game, only one in the last 10:39 of the contest.

Yes, that game against Columbus was a stinker, a game in which the Caps looked completely unprepared to play.  But they did rebound for a pair of wins, the latter played in front of a dramatic backdrop of a nationally televised outdoor game that was among the best games the team played this season.  And, with 17 games left in the season, winning two of every three games would give the Caps 22 more standings points to finish with 103 points, safely in the playoff mix.

But things get tougher – a lot tougher – in Week 23.  The California trip, always a challenge for the Capitals, will be the agenda for the upcoming week.  Winning two of three games on the left coast would be a success in any season.  Doing so here and now might be necessary for the Caps to preserve their thin lead in the Metropolitan Division.  It will not be easy, the three California teams with a combined 18-9-3 record over their respective last ten games.  Who said it would be easy?