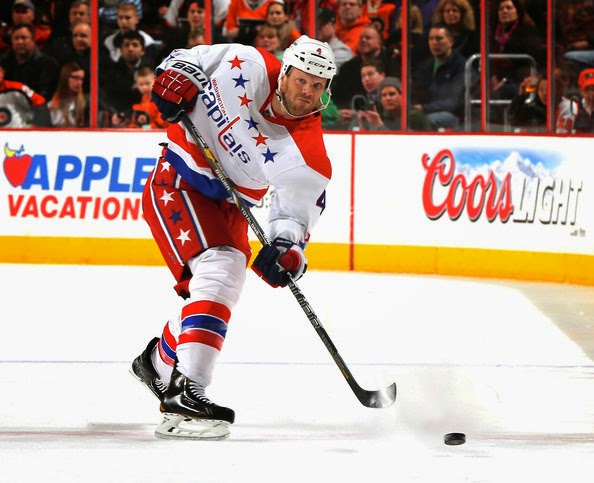 Since John Erskine joined the Washington Capitals as a free agent in September 2006, only 12 NHL defensemen have logged more penalty minutes.  The thing is, though, Erskine compiled his 529 penalty minutes in only 350 games, while 11 of the 12 defensemen in front of him on that list did it in more than 400 games, six of them in more than 500 games.

That statistic speaks to the hard way that John Erskine makes a living, something that deserves more respect that it sometimes gets from fans.  He is the closest player – perhaps the only player – resembling a physical defenseman the Caps have had since he arrived.  Consider the list of Capitals defensemen who have played in at least 100 games with the club since Erskine arrived:
There are not many defensemen with the adjective “physical” attached to them on that list.  Here is another way to look at it.  Erskine has been involved in 29 regular season fights in a Capitals uniform.  The other eight defensemen on that list above were involved in a combined seven fights in their tenures with Washington.  If the Discovery Channel ever brings back “Dirty Jobs,” John Erskine could host it in place of Mike Rowe.

Unfortunately, doing the dirty work has come at a price for Erskine.  Of the 622 regular season games that could have been played in Erskine’s eight seasons in Washington, he has appeared in only 350 of them, just 56 percent of the total number of games.  Only once – in 2010-2011 when he appeared in 73 games – has Erskine played in more than 52 games in a season with the Caps.  The injuries that accumulated over those eight seasons – foot, thumb, lower body, upper body, concussion, leg, hand, shoulder, knee – have peeled off a lot of games from those in which Erskine might have appeared.

For all the abuse John Erskine has taken physically over his eight seasons in Washington, he is 14th on the list of games played as a defenseman with the franchise, and it is possible that he passes both Shoane Morrisonn and Rick Green (tied with 377 games apiece) this season.  That experience might not be as big an issue with the addition of Brooks Orpik (703 regular season games) and Matt Niskanen (491 games), but experience can only be earned, and there are young Caps defensemen who are still building on that.  It might require careful management, but Erskine’s experience (not to mention his ability to be a physical presence) can have its place.

Cuz, there just isn’t any way to sugar coat this.  The Caps were 13-17-7 in games in which John Erskine appeared last season, 25-13-7 in games he sat out.  What do those fancy stat guys say, “constipation is not causation?”

(Peerless… “correlation is not causation”)

The Caps went out and got two free agent defensemen precisely because of the lack of depth in talent on the blue line in recent years.  While John Erskine is a high-effort player, there is a reasonable question about his being capable, at this point in his career, of being a 16-minute a night player on a contender (he averaged 15:51 a game over his first eight seasons with the Caps).

He is going to have a hard time cracking the 2014-2015 lineup unless there are injuries or one of the top six (Alzner, Carlson, Green, Niskanen, Orpik, and Orlov) simply goes into the dumper in terms of his performance.  He seems relatively safe to start the season with Orlov still recuperating from a broken arm suffered during last spring’s world championship that could delay his return to the lineup.  There does seem to be a bulls-eye on Erskine with respect to his continued presence on the roster, though.

John Erskine has been nothing less than a stand-up guy on a team that did not have much of a physical presence over his eight seasons with the club.  But the physical abuse has taken a toll.  He appeared in only 95 of 212 games over the last three seasons, only 37 of 82 contests last season.  With the additions of Matt Niskanen and Brooks Orpik for the defense, the Caps do not have a lot of spare minutes on the blue line into which Erskine can be slotted on a regular basis. Orpik, who can provide the physical style of play (within the rules) that Erskine might have provided, has been more durable a player than Erskine, despite being the same age (34).

As far as the physical style of play at the edge of the rules, there were rumblings of the Caps seeking to move Erskine’s contract so that the club could sign Paul Bissonnette, a move that might have save the team a considerable amount from Erskine’s $1,962,500 salary cap hit.  What it probably means is that Erskine is now on the edge of the roster, a 7/8 defenseman on this club.  If the Caps carry only seven defensemen, it would seem he will be in a battle with Jack Hillen for that seventh spot, especially now that Cameron Schilling (a prospect defenseman who is not waiver-exempt) was sent down to Hershey, pending his clearing waivers.

For eight years John Erskine has been a player who as much of more than any other Caps defenseman found himself in serious circumstances on the ice that required the exercise of his physical gifts and temperament.  The roster log jam is a different sort of circumstance in which he finds himself, one that is no less serious.

Photo: Elsa/Getty Images North America
Posted by The Peerless at 11:54 AM No comments:

Carlson was something of a bellweather in terms of his performance numbers.  He did not have a wide spread in his scoring numbers between wins and losses.  He was 7-16-23 in 38 wins, 3-11-14 in 42 regulation and extra time losses.  But he did have a wide spread in his plus-minus numbers.  It was in the losses that the numbers told something of a tale.  Carlson was minus-22 in those losses and was a plus player in only six of them.  That is merely another angle from which you can see his playing time (almost 18 minutes a game at even strength) and those high goals against on ice totals.

John Carlson tied for the team lead in games played (82), led the team’s defensemen in goals (10), was second in assists (27), was second in points (37), and led the team’s defensemen in shots (208), power play goals (5), power play points (22), and average time on ice (24:30).  Over his four full seasons in the league only three full-time defensemen have more even strength goals than Carlson (22): Karlsson, Shea Weber, and Keith Yandle.

Carlson was the go-to defenseman for special teams last season.  There were 195 defensemen last season who appeared in at least 40 games.  Of that group only three – Philadelphia’s Kimmo Timonen, Detroit’s Niklas Kronwall, and Carlson – averaged at least three minutes of power play time and three minutes of shorthanded ice time per game.  Carlson averaged slightly more total average special teams ice time (6:52) than the other two (6:49 for Timonen, 6:25 for Kronwall).

The possession numbers at 5-on-5 could have been better.  Carlson’s Corsi-for percentage (47.0) was 158th of 200 defensemen playing at least 500 5-on-5 minutes last season.  His Corsi-for percentage weighted for his teammates was not much better (48.0 percent), 150th among that group of defensemen. Carlson also had his issues against divisional opponents.  Outside the Metropolitan Division he was 7-22-29, plus-5 in 57 games.  In 25 games within the Metro, he was 3-5-8, minus-8.

The Big Question… Is this John Carlson’s year to step up and step out as a top NHL defenseman?

Maybe it is having played in Washington for five seasons where the attention, to the extent it exists for the hockey team, is generally centered on the trials and tribulations (and the goals) of Alex Ovechkin.   Maybe it is because the Capitals have not won as much as other teams, but John Carlson does not get much in the way of media attention, at least not as much as a top-shelf NHL defenseman might get.  That’s not to say that Carlson is an also-ran defenseman.  Hardly, but for a guy who was a first round draft pick, who has a world junior championship, who has two Calder Cup championships, who was a first team defenseman on the 2011 All-Rookie Team, and who had the most votes of any rookie defensemen for the Calder Trophy in 2011, the media spotlight does not often shine on him.

That could change.  Carlson has been playing a gradually expending role with the Caps since he entered the league late in the 2009-2010 season.  He is a man for all situations and has cemented himself as a core component of the Capitals for the foreseeable future.  While we have commented on his partner Karl Alzner’s consistency, Carlson has shown a certain consistency of his own.  His points per game over his first four full seasons with Washington fall in a tight range: 0.45/game in 2010-2011, followed by seasons of 0.39, 0.46, and 0.45.  Carlson compiled this resume not having reached his 25th birthday (he will turn 25 in January).

Now, it is time to take the next step.  Carlson might particularly benefit from having coaches experienced in developing defensemen behind the bench this season.  Barry Trotz and Todd Reirden might be able to tap the next vein of talent in Carlson’s repertoire in a way Adam Oates and Calle Johansson could not over the past two seasons.

John Carlson has been a rock for the Capitals over the past four seasons.  He has had bouts with inconsistency in his own end, but that might be explained away by his youth and the development curve for defensemen.  He still has just 316 games on his NHL resume.  And even though that number is sixth among defensemen of his 2008 draft class (behind Zach Bogosian, Tyler Myers, Drew Doughty, Luke Schenn, and Michael Del Zotto), it is not a high volume for a position with a long developmental curve.

With the Caps improving their depth on the blue line this past summer, some of the heat might be taken off Carlson to carry as heavy an all-situation load as he did last season.  In that respect it is an opportunity for Carlson to substitute higher quality of play for logging heavy minutes or in having to face opponents’ top competition as part of shutdown pair in addition to his responsibilities to carry an offensive load.

Cheerless noted that Carlson had rather ordinary numbers against Metropolitan Division opponents.  Here is another way to look at his performance.  He was 4-12-16, minus-4 in 28 games against the eight teams in the Eastern Conference that reached the playoffs last season.  If you take out his performance against the Philadelphia Flyers, against whom he struggled (0-0-0, minus-6), he was 4-12-16, plus-2 against the other seven teams over 24 games, a respectable level of performance against stiffer competition.  John Carlson is poised to take the next step forward in his developmental arc.  It is time for his close-up.

Posted by The Peerless at 8:54 AM No comments: