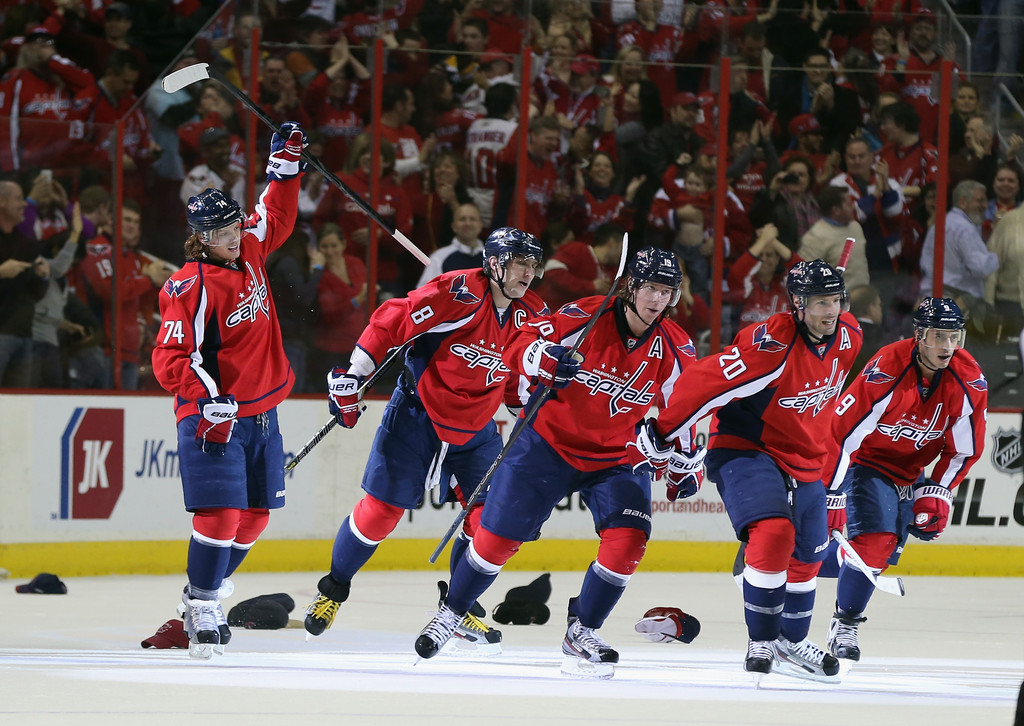 The Background:  As February was coming to a close, the Capitals were struggling and in danger of falling out of the playoff race almost before it began.  Washington finished the one-third mark of the season in last place in the Eastern Conference.  A large part of that disappointing start was the fact that the Caps were 2-8-1 against teams outside of the Southeast Division, including the 3-2 loss they suffered to the New Jersey Devils in the first half of a scheduling quirk – back-to-back games against the Devils hosted by the Caps on February 21st and 23rd.

The first game of the back-to-back was especially hard to swallow, given that the Caps twice held one-goal leads and gave up the lead for good when the Devils scored two goals barely two minutes apart midway through the third period.  The last one came on what would be the Devils’ sixth power play of the contest, Ilya Kovalchuk doing the damage for the game-winning goal once more.  The penalty that led to it – an interference call on Tom Poti – was the sixth minor penalty charged to the Caps in the third period.

The sixth time was the charm.  It would be the only successful power play on the evening for the Devils.  It was a frustrating night overall for the Caps, punctuated by Troy Brouwer going off on a rant at an official at the 20:00 minute mark, smashing his stick on the bench, and drawing a ten-minute misconduct penalty for his tirade.

Why it mattered:  From one perspective, the Caps were only six points out of a playoff spot when they took the ice against the Devils in the back-half of the back-to-back games.  Then again, the Caps had just those two wins against a team not in the Southeast Division, and they were in jeopardy of suffering their third losing streak of the season of at least three games after just 17 total games played.

The Caps needed to make a statement and needed to make it with their top players.  In the 3-2 loss in the first game against the Devils in the back-to-back set, Mike Green did not dress, while Alex Ovechkin and Nicklas Backstrom combined for one assist (Backstrom) and a minus-3.

Green would not dress for the second game of the set, either, meaning that someone had to step up for the Caps.  After 25 minutes of this game, though, it was hard to see just who it might be to step up for either team.  The clubs split just ten shots on goal in the opening period without a goal being scored, and five minutes into the second period the Caps were turned away on the only shot they recorded, and the Devils were denied on the three shots on goal credited to them.

But with just over five minutes gone in the second period Mike Ribeiro, of all people, separated Adam Henrique from the puck at the back of the Washington net.  The puck squirted out to Alex Ovechkin, who fed the puck to John Erskine heading up ice.  Erskine moved the puck back up to Ovechkin heading down the right side.  Ovechkin dropped the puck for Jason Chimera, who skated with it into the Devils’ zone, spun, and found Ribeiro skating down the middle.  When the Devils’ defense closed on Ribiero, he ladled the puck to Ovechkin in the left wing circle.  A one-timer past goalie Johan Hedberg’s blocker later, and the Caps had a 1-0 lead.

The Devils tied the game in the last minute of the period – Ilya Kovalchuk being a nuisance to the Caps yet again – and that might have deflated the Caps entirely.  However, just 83 seconds into the second period Ovechkin took a long feed from Matt Hendricks, skated into the New Jersey zone, and using defenseman Anton Volchenkov as a screen snapped the puck past Hedberg’s blocker on the long side to give the Caps the lead for good.

Eric Fehr gave the Caps a two-goal lead while shorthanded when after the Caps cleared the puck down the ice, Hedberg misplayed it in his skates, allowing Fehr to pick his pocket and wrap it around the post before Hedberg could return to position.

Ovechkin drove a stake through the Devils on the power play with just under five minutes left not long after he was robbed at the door step on a pad-save by Hedberg.  His next chance found the back of the net off a feed from Mike Ribeiro from the goal line extended, through the slot and onto Ovechkin’s stick in the left wing circle.

When Troy Brouwer added a power play goal less than two minutes later the Caps had their first five-goal game against a team not named for a large cat (Florida Panthers).  The Caps also avoided another three-or-more game losing streak (they would have only one more of that length over the rest of the season), and it got them started on a 5-1-0 run that would help turn around their season.

For the Caps it was their most convincing win to date on the schedule, their 5-0 win over Florida on February 9th notwithstanding. Mike Ribeiro had a pair of assists, and seven other Caps recorded a point.  Matt Hendricks was credited with six hits.  Jay Beagle and Mathieu Perreault won a combined 16 of 21 faceoffs (76.2 percent).  The Caps as a team held the Devils to only 22 shots (only twice all season would the Caps hold an opponent to fewer), and Braden Holtby stopped 21 of them in goal, including a penalty shot attempt by Steve Bernier that could have tied the game mid-way through the second period.  Ovechkin got most of the attention after the contest, but it was a team effort with a lot of guys stepping up after a tough loss to the same team on the same ice sheet just two nights earlier.

The Caps were not the same team after this game.  They went on a 5-1-0 run starting with this game and would go 10-7-2 outside the Southeast Division over the rest of the year after starting the year with a 2-8-1 record against those teams.  Starting with this game the Caps averaged 3.22 goals per game over their last 36 contests and allowed an average of just 2.38 goals per game.  If they were not quite The Greatest Show on Ice that they were in the 2009-2010 season, they were a very productive team over those last 36 games.  And because that run started with this game, the February 23rd game against the Devils is one that mattered.