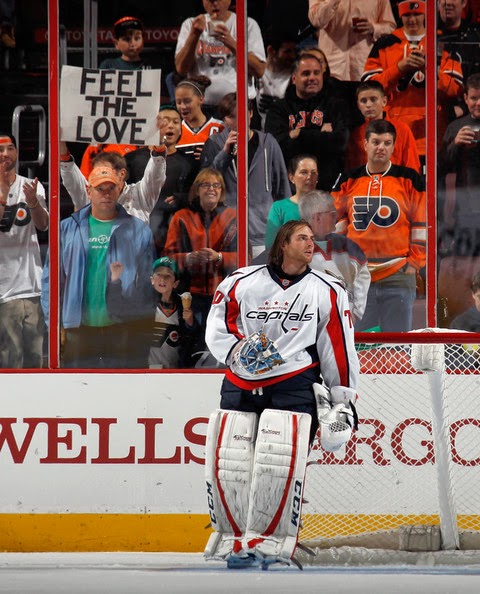 In the second of this series of games that mattered for the Washington Capitals in the 2013-2014 season we go back to a game that renewed a rivalry dating back to the earliest days of the franchise, one that featured opponents separated by less than 150 miles.  This edition would resemble many of the earlier battles, but it would be quite different as well.

The Background:  Over 38 seasons the Caps and Flyers faced off 194 times in the regular season, the Caps holding a 73-97-19-5 record.  Many of those games were knock-down, drag-out battles.  If one took quick stroll through the Capitals record book, you would find that the Capitals’ team record for penalty minutes in a home game (147 minutes) and for a road game (177 minutes) would be set against the orange and black.  You would also find that the games setting Capital records for penalty minutes by both teams, both home (294 minutes) and road (344 minutes), were set against the Flyers.  This is a different era than that in which those records were set, more than 20 years ago, but this game did not lack for a certain pugilistic excitement.  For the Caps, though, it was a good deal more.

Why It Mattered:  Neither team had what you would call a good first month of the season. The Caps almost salvaged one with a three-game winning streak late in October, but gave back a portion of that with consecutive losses and a 5-7-0 record heading into their contest in Philadelphia to open November.  For the Flyers it was worse.  Philadelphia started the season losing seven of their first eight games and couldn’t find the back of the opponent’s net with a map and a flashlight, scoring only 11 goals in those eight games.  Philadelphia then won consecutive games but lost to Anaheim before hosting the Caps.

The game itself started innocently enough for a Caps-Flyers hockey game.  The teams were scoreless through the first 17 minutes with only three minor penalties called.  The Caps did not record their first shot on goal until 15:05 elapsed.  The Caps broke the ice on their second shot, though, on a play featuring some slick eye-hand coordination on the part of defensemen Nate Schmidt.  Flyer defenseman Braydon Coburn tried to backhand the puck out of his right wing corner up the wall, but the bouncing puck made it only as far as the Flyers’ blue line.  Schmidt stilled the puck with his right skate, then as he was backing up flicked the puck to the middle onto the stick of Martin Erat.  From the high slot Erat found Nicklas Backstrom at the top of the right wing circle for a one-timer that beat goalie Steve Mason over his glove on the far side at 17:28 of the period.  The Caps would carry that lead to the locker room at the first intermission, the calm before the storm of the last 40 minutes.

It started with a thunderclap just 84 seconds into the second period.  Joel Ward took a feed from Jason Chimera behind the Flyers’ net, and when his path around the wall was blocked by Brayden Schenn he lugged the puck out in front to Mason’s right.  The puck slid off his stick, but Mark Streit could not get it puck out of danger when he took a swipe at it.  From a tangle in front of Mason, Ward got his stick on the puck once more and batted it through Mason’s pads to give the Caps a 2-0 lead.

That goal would start the deluge.  Jason Chimera scored 80 seconds after Ward’s goal to give the Caps a 3-0 lead and end Mason’s night…well, for the time being.  Just 65 seconds after that Nicklas Backstrom scored on relief goalie Ray Emery, and it was 4-0.  Then the Caps struck twice late in the period.  First it was Ward with his second goal of the game, wristing the puck in off the post to make it 5-0.  Then things took an ominous turn.  A minute after the Ward goal, Aaron Volpatti dropped Matt Read along the wall.  Steve Downie took this as a cue to start something, and he jumped Volpatti.  It was Volpatti who made short work of Downie after connecting with a left to Downie’s left eye, and both were sent off for fighting.  Downie received an extra two minutes as the instigator and suffered a concussion to boot.  The Caps would rub salt in that wound when they scored on the ensuing power play with just 1:40 left in the second period to take a 6-0 lead into the second intermission.

That might have been it, but there was still the matter of actually playing the third period.  The Capitals kicked the extra point 5:23 into the period when Ward completed his first career hat trick, cleaning up a loose puck in the low slot in front of Emery.  Apparently, “six” was the goal tolerance for the Flyers.  When the teams faced off after goal number seven for the Caps, it took eight seconds for the ill will to manifest itself.  Off the faceoff the Flyers’ Wayne Simmonds ran over Steve Oleksy chasing down the puck along the wall, where he then got tangled up with Tom Wilson.

While those two were dropping the gloves Ray Emery saw his chance to race the length of the ice to challenge Braden Holtby to a bout.  Emery, who is trained in the pugilistic arts, indulged himself with an uninterrupted barrage on Holtby, who is not trained in the sweet science.  For his trouble, Emery received 19 minutes in penalties – two for leaving the goalie crease, two for instigating, five for fighting, and ten for a game misconduct.  It would end his night, bringing Steve Mason back for mopping up the mop-up job.

But before Mason could take the ice, there was other action to unfold as part of this kerfuffle.  For fans who thought two fights was on the light side of entertainment (and this being Philadelphia, you can bet that was the prevailing attitude), Alexander Urbom and Brayden Schenn squared off in what fans of such things might describe as “entertaining,” with both players throwing punches with frequency and enthusiasm, Urbom eventually dropping Schenn to the ice and pinning him there.  If three fights wasn’t enough, there were Steve Oleksy and Vincent Lecavalier going at it.  Despite giving up four inches and 25 pounds to Lecavalier, despite having four fights on his NHL resume to 24 for Lecavalier, Oleksy loosened some of Lecavalier’s teeth and left the Flyer center with injuries that would put him on the shelf for the next Flyers contest.  The Flyers might have indulged their rough housing pedigree, but it was the Caps skating off with a 7-0 win.

The seven goals would be a team high for the season, and no Caps team scored so many goals in a shutout on the road since the Caps beat Pittsburgh, 8-0, on October 29, 1991.  And, they did it without the services of Alex Ovechkin, who sat out this game with an upper-body injury.

There was an odd mythology that attached to this game.  Some folks, those in Philadelphia for instance, saw this game and the line brawl it produced as some sort of galvanizing event, one that brought the Flyers together in a uniquely Philadelphia sort of way.  The fact is that the Flyers did not follow this game up with a winning spurt.  They beat New Jersey in their next game, and then lost a pair.  But they did go 39-21-10 after this game through the end of the season.

On the other hand, this was the first win in what would be the Capitals’ first four-game winning streak of the season (they had three such streaks).  It propelled them to a 7-1-1 run to start the month of November, their best nine-game record all season.  It would not be something they could sustain, though.  After that 7-1-1 run the Caps went 26-22-13 to close the season and did not beat the Flyers again in regulation time, going 1-2-1 (winning in a Gimmick in December).

Still, what with the back-to-the-future vibe of a four-fight line brawl, the first-ever NHL hat trick by Joel Ward, a career-high four-point game for Jason Chimera (1-3-4), a three-assist night for Mikhail Grabovski, and the Caps scoring a touchdown on the Flyers in the absence of Alex Ovechkin, it was one of the most entertaining and satisfying games of the season.  Even with Braden Holtby serving as a speed bag for Ray Emery, he got the last laugh with a 30-save shutout.  And that made this a game that mattered.