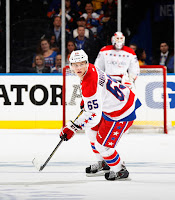 “When you're young, you're not afraid of what comes next. You're excited by it.”
-- Dave Grohl

“It’s still kind of new, but I’m learning…”  That was Andre Burakovsky talking about life as a prospect learning a new position after the Capitals’ rookie game against the Philadelphia Flyers’ rookies last September.

It was the wrap-up to an impressive rookie camp for Burakovsky, but one that served as prelude to what was expected to be a year of seasoning with the Hershey Bears in his first year of professional hockey in North America.

Three weeks later he was in the Opening Night lineup as the Caps hosted the Montreal Canadiens at Verizon Center.  Less than seven minutes into that contest, Burakovsky’s meteoric rise to the NHL bore its first dividends, as he scored the team’s first goal of the 2014-2015 season…

It was all part of a hot start for the upstart rookie – 3-9-12, plus-5, in his first 15 games.  Then he went as cold as the ice sheet on which he was skating – one point (a goal) in his next ten games.  Burakovsky was then introduced to a ritual of development, the shuttle between Washington and Hershey.  He was assigned to the Bears on December 19th, then recalled three days later.  He played intermittently over the next six weeks, appearing in 14 of 19 games before being sent to Hershey again in what appeared to be a procedural move (he was recalled the following day).  He would be assigned to Hershey three times in March and recalled one last time to Washington on April 5th.

Burakovsky also recorded 13 regular season games with Hershey, finishing with three goals and seven points.  He had a goal in his only playoff appearance for the Bears.

Burakovsky dressed for 11 of the Caps’ 14 postseason games, and he was the third-youngest rookie to record points in the playoffs (Bo Horvat and Sam Bennett being younger).  In fact, since 2006, only 15 players younger than Burakovsky scored a goal in a playoff game.  But before that, he pulled his weight as a scoring line winger.  Of the forwards with whom he played last season, Burakovsky skated more than 100 5-on-5 minutes with Marcus Johansson (222), Alex Ovechkin (218), and Nicklas Backstrom (213).  His possession numbers with and without each were impressive.  Johansson had a Corsi-for at 5-on-5 of 54.2 with Burakovsky, 52.7 when apart from him.  The comparable numbers for Ovechkin were 54.4 and 53.4; with Backstrom they were 53.7 and 54.0 (numbers from stats.hockeyanalysis.com).  The rookie was no anchor on scoring lines.

It would be really hard to nitpick about Burakovsky’s season last year – and what is with using that whole idea about picking nits, anyway?  OK, so he had a really nice season, an unexpected one at that since a year ago just about everyone had him wearing a Bears jersey.  But for all the unexpected scoring and getting face time with the big line and being a good possession player, what was the happy ending?  The Caps had a 28-19-6 record with Burakovsky in the lineup (1.17 standings points per game) and a 17-7-5 record when he was not in the lineup (1.34 points per game).  Lots of stuff goes into that sort of thing – quality of opponents, home and road splits, sunspots – but it wasn’t quite all unicorns and accordions when he was on the ice in terms of the bottom line.

The Big Question… What does a second act look like in “Andre on F Street?”

There will be no surprising anybody this season.  There will be no “naïve confidence” or “blissful ignorance” when he takes the ice.  He could be thrust into a responsible role as second line center to start the season, given the uncertainty about Nicklas Backstrom’s availability to start the season after off-season hip surgery.  He would be doing it with one familiar face – Johansson, his most frequent partner among forwards in 5-on-5 ice time last season – and one not, either Justin Williams or T.J. Oshie.  Given that he is still relatively new to the position (he was drafted as a winger), it will be either a stiff test to pass or water too deep for his skill set and experience.  How he does could be more important than how Evgeny Kuznetsov does centering the top line in Backstrom’s absence.  Kuznetsov has more experience and, at this point, a more developed skill set than Burakovsky.

In the longer run, the question of what the second act looks like becomes one of whether Burakovsky takes up a position on the wing or at center of the third line.  The subtext will be whether he has matured physically to withstand the persistent bumps and grinds he will have to endure over an 82-game season.  He will not have the protections here that he had last season in terms of linemates or matchups (particularly on the road where the home team gets last change).  The second act of Burakovsky’s career might not be a fantasy player’s dream, but it could make him a more complete player for the different kinds of challenges he will face.

The jump from juniors to the NHL was unexpected and substantial for Burakovsky.  It would be tempting to think that this is the start of an unbroken development arc that will propel him into the upper levels of the under-25 forward set in the NHL.  More realistically, the advance from year one to year two will be somewhat more modest than that of year zero to year one, especially because his progress last year was so much more than expected.

There is, though, what amounts to an opportunity to take a “condensed course” in managing a scoring line that will be afforded him in the event Backstrom is out to start the season.  This is a different, if not dissimilar, sort of opportunity than the one he had last season.  In this case, an opportunity to fill a role he would not have been expected to fill, all other things being equal (all things being equal, he would not have been expected to be in the Opening Night lineup last season, either).

More than perhaps any Capital, getting a bead on what sort of year Burakovsky might have is difficult.  He could be asked to play a number of roles, some a product of circumstances outside of his control (moving up a line due to Backstrom’s absence), others a response to his own play (center or wing, third line or a conventional scoring line).  It will a test of his versatility and his sturdiness.  In any case, it will make for one of the more interesting “second acts” in recent Capitals history.