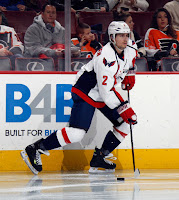 “The secret of all victory lies in the organization of the non-obvious.”
-- Marcus Aurelius

If you watch Matt Niskanen in one game, you almost certainly will not get an appreciation for the diverse talents he has.  Coming into this season he was one of ten defensemen since he came into the league in the 2007-2008 season to play in 500 games, record at least 35 goals, post at least 150 points, and have a plus-minus of plus-30 or better.  He combined durability, an ability to contribute offensively, an ability to be effective at both ends of the rink, and to log significant minutes (just under 20 minutes per game).  He was 6-23-29, plus-7 on a per-82 game basis over those eight seasons, and over a five-season stretch ending with his first season in Washington last year, he saw his ice time increase every year, from 16:32 in 2010-2011 to 22:21 last season with the Caps.

In 2015-2016, Matt Niskanen had a year that might not have been foreseen, given the profile of results he had with the Pittsburgh Penguins in the year before he became an unrestricted free agent signed by the Caps.  In that last year with the Penguins, Niskanen posted the best offensive numbers of his career (10-36-46, plus-33, a plus-6.9 Corsi-for/Relative in all situations, PDO of 103.3 in all situations).  His first season with the Caps was more modest, with four goals and 31 points, with a plus-7.  In 2015-2016, Niskanen’s contributions were more nuanced than perhaps at any other point in his career.

Niskanen did pare back his penalty minutes (from 47 to 38), but he seemed to play with a bit more of a physical edge.  He was credited with 157 hits this season versus 143 last season.  He also upped his blocked shots from 106 to 145, and he reduced his giveaways from 76 to 62. 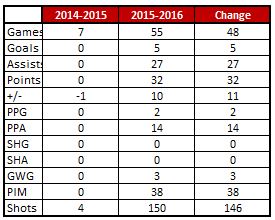 Fearless’ Take… It can be easy to take a player’s durability for granted.  For the second straight season, Niskanen appeared in all 82 games.  He is one of just eight defensemen to appear in all of the season’s games, and having missed just one game in his last three seasons;  only five defensemen have appeared in more contests.   Then there is the ice time he consumes.  This past season, 128 defensemen logged 25 or more minutes in at least one game.  Niskanen was 17th on that list with 35 games of 25 minutes or more of ice time.

Cheerless’ Take… There isn’t a part of Niskanen’s game that really sticks out in a good way this season, but it is even harder to find a part of his game that stood out in a bad way.  His ten-game splits do have a little bit of odd in them, though.  He was a minus-2 in each of his last ten splits and a minus-4 in 5-on-5 goal differntial, even though he had solid possession numbers.  And those possession numbers and scoring chance differential in the third and fourth set of ten games were nothing to get excited about.

Odd Niskanen Fact… In nine NHL seasons with three different teams (Dallas, Pittsburgh, Washington), Niskanen has never finished a season below 50 percent in Corsi-for at five-on-five.  Neither has he ever finished in negative territory in Corsi-for/Relative at 5-on-5 (numbers from war-on-ice.com).

No point earned in the NHL is “easy,” but on Opening Night at Verizon Center, Matt Niskanen’s 200th career NHL point was as easy as it is ever likely to get.  Having already recorded a point on an assist on an Alex Ovechkin goal in the third period against the New Jersey Devils, the Caps took a 4-2 lead into a power play with 4:38 left in regulation.  In what has become something of a thing in the NHL, the Devils, down by two goals and shorthanded, lifted goaltender Keith Kinkaid for an extra skater.  With the clock ticking down past the three-minute to go mark, Niskanen slid the puck from the right point to Dmitry Orlov on the left side.  Orlov moved the puck down the wall to Justin Williams at the goal line extended to the right of the cage.  Williams circled out, fending off defenseman John Merrill, and found Niskanen filling in from the point.  With the net empty and Kyle Palmieri trying mightily to assume the role of netminder, Niskanen ripped a slap shot into the net with 2:53 left for his 200th point in a 5-3 Caps win.

On the same ice sheet four months later against the same team, things did not go quite so memorably for Matt Niskanen.  Three times the Devils took a one-goal lead, three times Matt Niskanen was on the ice for them, including goals against on consecutive shifts late in the first period.  The Capitals did tie the game a third time, and they went on to win, 4-3, on a Brooks Orpik goal of all things.  However, Niskanen suffered his only minus-3 of the season, and his 19:54 was one of only two games all season in which he did not finish with 20 minutes of ice time.  It does bear noting, though, that holding a one-goal lead, he was out there for the last shift of the game.

In the postseason, it’s not how you start but how you finish.  Matt Niskanen recorded a pair of assists over the first four games of the first round series against the Philadelphia Flyers, was plus-3, and his possession numbers were good (52.0 percent Corsi-for at 5-on-5).  His possession numbers only improved in the last two games; he finished the Flyer series with a 57.7 percent Corsi-for.  The second round series against the Penguins was another matter.  He had one point, an assist in a Game 3 loss, and his possession numbers sagged – 45.1 percent Corsi-for at fives.  And, having to make do without his regular partner, Karl Alzner, for almost the entirety of the second and third periods of Game 6, lost by the Caps in overtime to end their season, Niskanen’s possession numbers took it in the teeth.  He was minus-20 in Corsi plus-minus, 32.8 percent for the game, his worst of the postseason and seventh worse game result out of 94 regular and postseason games this season.

We have to admit to a quiet admiration for players like Matt Niskanen, guys who perform at a consistently high level without generating a lot of hoopla in doing it.  He has had a remarkably consistent career in his performance numbers (goals, points, plus-minus) and his production numbers (possession).  This year was no different.  That the season ended as it did for him, with an all too close view of the game-winning, series-clinching goal in overtime against the Penguins, was not so much anything he did or did not do as circumstance – the Caps unable to ice their best defensive pair with Karl Alzner out with an injury.  Nevertheless, in the long arc of an NHL season, Niskanen had another good one, although sometimes it was not quite obvious how good.