The Peerless Prognosticator is ON THE AIR!!! -- Game 71: Capitals at Kings, March 20th

It is one down and two to go for the Washington Capitals on their California road trip, and that means a visit to Staples Center in Los Angeles to visit the Kings.  The Kings have been a nuisance to the Caps for quite some time.  Since the Caps won four in a row against this franchise back in the early 1990’s, they are 5-15-3 in their last 23 meetings dating back to October 1995.  All of the wins were of the one-goal variety, while seven of the losses came by three or more goals.  This is a team against which the Caps have a long recent history of struggle.

This more recent vintage of the Kings was riding quite high just a week or so ago with an eight game winning streak.  However, the Toronto Maple Leafs ended that streak a week ago, and the Kings are now on a three-game losing streak since, dropping one-goal decisions to the Maple Leafs, the Anaheim Ducks, and the Phoenix Coyotes.

The Kings are a club that lives and dies by their goals allowed.  When allowing two or fewer goals they are 34-5-3.  However, when allowing more than two goals in a game they are 4-20-3.  It really is a thin margin.  In seven of the eight games of their recent winning streak they held teams to two or fewer goals, while in two of the three games of their losing streak since they allowed more than two goals.

Goals allowed being such a prominent factor in the Kings’ success, that brings us to defense.  It starts with Jonathan Quick in goal.  Quick is fourth in the league in goals against average (2.10) but just tied for 20th in save percentage (.914).  Why the disparity?  No goalie among all those qualifying among the goals against average leaders has faced fewer shots per 60 minutes than Jonathan Quick (24.5).  Only twice this season had Quick faced more than 30 shots in a game, only once in his last 32 appearances.  He performed well in those games, winning one and losing in a shootout in the other (.957 aggregate save percentage), but he does not as a rule get a heavy workload.  Quick is 2-0-0, 2.50, .931 in two career appearances against the Capitals.

Offense has been something of an issue for the Kings, well managed because of their impressive defense and goaltending.  The fact remains that Los Angeles scored more than three goals in a game only once in their last nine games, only twice in their last 21 games.  It is not a team that displays a lot of offensive firepower.  Only six players have reached the double digit mark in goals.

An odd part about the Kings’ offense is that of the 13 players having hit the double digit mark in points this season, five of them are defensemen.  Three of them – Drew Doughty, Slava Voynov, and Jake Muzzin – have 20 or more points.  Voynov has been having an especially noteworthy year in the context of his career development.  In this, his third year in the NHL he has set career highs in games played (69), assists (24), and points (27).  He has four assists in his last six games, although what he has been lacking in lately is goals.  He has not scored a goal of his own since November 14th against the New York Islanders, a streak of 50 games.

At forward, Anze Kopitar might be among the top five forwards in the league.  On an offensively challenged team he still has more than 20 goals (21), more than 50 points (57), and a plus-minus above 20 (plus-24).  No player has a higher Corsi-for percentage at 5-on-5  (61.1) than Kopitar, and he is second in Fenwick-for percentage at 5-on-5 among all skaters.  He has a knack of tilting the ice so that the Kings have more shots on goal than opponents, reflected in his shots-for percentage of 59.8 percent, tops in the league.  Put another way, the Kings have almost 200 more shots on goal when he is on the ice than opponents at 5-on-5 (579 to 390). 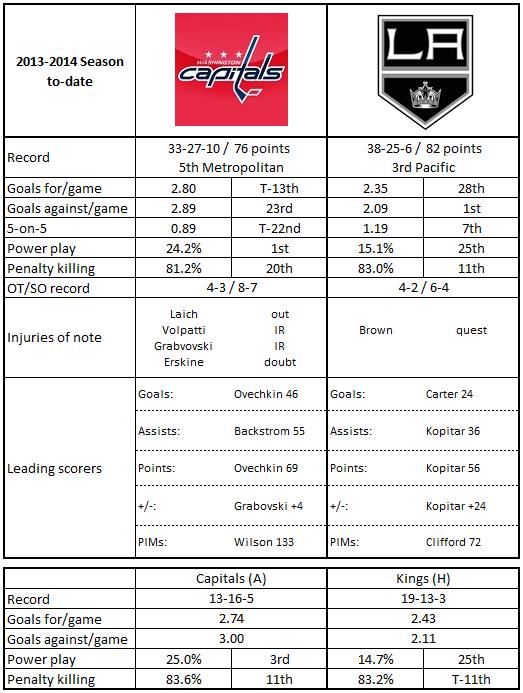 1.  The Kings are possession maniacs.  Kopitar is not the only Kings player who dominates the shots for/against percentages.  He, Justin Williams, Jake Muzzin, Dwight King, and Dustin Brown rank in the top-12 in shots-for percentage at 5-on-5.  That is a product of the Kings leading the league in Corsi-for and Fenwick-for percentages.

4.  Something that seems unexpected for a team that depends so much on defense and low scoring games is that the Kings have had the third highest number of shorthanded situations faced this season, and their penalty killers are good (83.0 percent; 11th in the league), but not extraordinary.  Only six teams have allowed more power play goals than the Kings.

5.  For what it is worth, here is an odd juxtaposition of real time statistics.  The Kings are second in the league in hits credited at home.  They are next to last in blocked shots in home games.  And, they have a staggering (to the point of stretching credulity) ratio of giveaways-to-takeaways of 4.30:1 at home, not what one would expect for a team that keeps the barn doors closed in their end of the ice.

2.  Only five teams have allowed more first period goals than the Caps (62).  Not that it seems to matter a lot.  The Caps do not do so well when leading after one period, relatively speaking.  They have the sixth worst record in the league when leading after 20 minutes.

3.  Only Toronto (56) and Buffalo (54) have been out-shot in games more than the Caps (46) this season.  That the Caps are 21st in winning percentage when out-shot says something about why they are on the outside looking in at a playoff spot.

4.  Three teams this season have more bench penalties than the eight the Caps have, twice as many as the Caps had in 48 games last season.  Only nine had fewer bench minors last season.

Who?  OK, so you might not get to see the late games from the west coast that often, but the second-year center from Scarborough, Ontario, has 25 points in 49 games this season for the Kings, a respectable number given this team’s overall offensive production.  He has been providing some production from down the roster with his 2-6-7 over his last 12 games.  It might not sound like a lot, but it is more than the 2-2-4 of Mike Richards over 12 games, and it looks a lot like the 3-4-7 of Justin Williams over his last 12 games.  He has never faced Washington.

Dustin Penner heads into Game Two of his “Former Team Road Show” still looking for his first goal with the Caps in what will be his ninth game with the club.  Penner is still in search of a consistent role other than just “left wing.”  Is he a top-six contributor or a bottom-six grinder?  Does he get power play time, or is he expected to contribute at even strength?  He is averaging two fewer minutes of ice time with the Caps (13:13) than he did with Anaheim (15:15) before his trade to Washington.  He has spent most of his 5-on-5 time so far with Troy Brouwer (52:30) and Marcus Johansson (40:04), suggesting that the preferred fit is as a second line contributor.  However, he has just nine shots on goal in eight games with the Caps so far, a hint that he just has not found a way to mesh with his new teammates/linemates yet.  It needs to happen soon.

1.  Get to 30.  Jonathan Quick is not the best manager of high shot volumes.  Over the last two seasons, Quick is 2-7-3 when facing 30 or more shots with a goals against average of 2.79 and a save percentage of .916.  Compare that to his 2.16 goals against average when facing fewer than 30 shots over the past two seasons.  Is save percentage in those low-shot games is actually lower (.906), but the point is that he is more or less a consistent puck-stopper regardless of shot volumes.  Find a way to put more shots on goal, he does not generally ramp up his game in terms of save percentage that much.

2.  Demonic Possession.  Those shot volumes are not going to generate themselves.  The Caps will be facing an elite possession team.  They have to battle here…hard.  If this ends up being another passive game where the Caps are the ones allowing high shot volumes, this is not going to end well.

3.  First Line First.  The Caps have gotten away with some less-than-elite performances from their top line lately, especially at even strength, and specifically from Alex Ovechkin.  Going into the last dozen games of the season, he needs to be at the top of his game.

This is the game that could make for a successful road trip, and not just because a lot of folks think the Caps have next to no chance to win in San Jose on Saturday, given their history there.  A win here, over a team with the sort of defense-first, grind-you-down style of the Kings, a team with a Stanley Cup pedigree that is built for the post-season, and the Caps look like a team that might have a fighting chance for a playoff spot after all.  Add to that the fact that the Caps could be among the playoff qualifiers if they win this game, and Columbus loses to Montreal earlier in the evening, and it should be motivation enough.