The Peerless Prognosticator is ON THE AIR!!! -- Game 17: Capitals at Blues, November 15th

The Washington Capitals, fresh off their 1-0 loss to the New Jersey Devils on Friday night, head on the road to The Gateway of the West, St. Louis, to meet the Blues in a battle of teams near the top of their respective games.  The Caps, even with the loss, are 3-1-0 in their last four games and have allowed only eight goals in the process.  Meanwhile, the Blues are winners of nine of their last ten games, a 2-1 loss to the Nashville Predators that broke a seven-game winning streak last Saturday the only blemish on that record.

On offense, the formula has been simple for the Blues in their 9-1-0 run – everybody feed Tarasenko.  Vladimir Tarasenko has nine of the Blues’ 30 goals in their last ten games.  The third-year forward, taken 16th overall in the 2010 entry draft, has shown himself to be a goal scorer from the start.  In his rookie season of 2012-2013 he averaged 0.21 goals per game.  That number jumped to 0.33 goals per game last season, and through 16 games this season he is averaging 0.63 goals per game.  His ten goals in 16 games is tied with Toronto’s Phil Kessel for fifth in the league.  And, like a fellow Russian known well to Caps fans, he is not shy about shooting the puck.  His 63 shots on goal is tied for fourth in the league with San Jose’s Logan Couture, ten shots behind league leader Alex Ovechkin (through Thursday’s games).  He is without a point in his only appearance against the Caps to date.

The other side of the equation is who is providing the helpers.  The defense has contributed only two goals to the 30-goal total over the Blues’ last ten games (Carl Gunnarsson and Jay Bouwmeester doing the honors).  But five defensemen have recorded to total of 19 assists in this run of good fortune.  Kevin Shattenkirk has contributed eight of those helpers.  Shattenkirk has been a prolific point producer from the blue line, by modern standards, averaging 45 points per 82 games over his four-year career coming into this season.  He has ramped that up significantly so far.  With 14 points in 16 games he is on a pace for 72 points.

Here is how the teams compare in their numbers through Thursday night’s games: 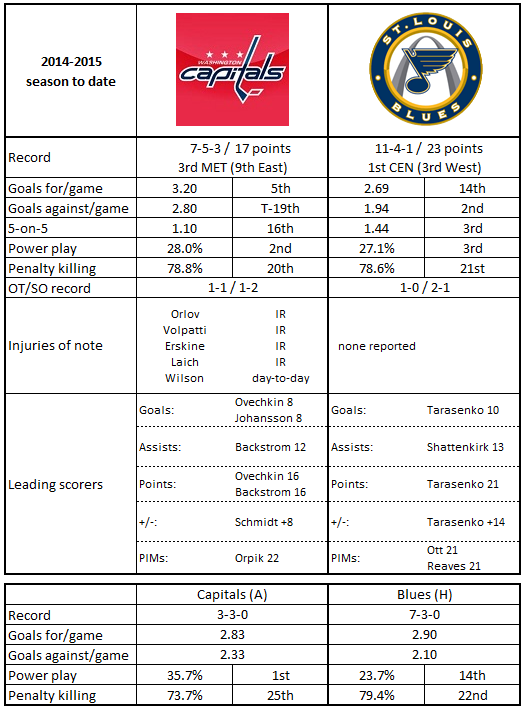 3.  If you score against the Blues’ goalies at even strength, keep the puck.. Brian Elliott has the best even-strength save percentage (.950) among goalies appearing in at least five games.  Jake Allen is sixth (.944).

4.  Score first, and you have a chance.  No team has more wins than the Blues when scoring first (8).  They are only 3-3-1 when allowing the first goal.

3.  Only Buffalo has won fewer games (none) when trailing first in games than the Caps (1).

4.  The Caps are wasting a lot of good efforts at holding shots down.  They are just 5-5-3 when outshooting their opponents.

With all the attention being paid to Vladimir Tarasenko, Jori Lehtera is flying under the radar.  Don’t be deceived.  In the Blues’ 9-1-0 run he is 5-8-13 and had a hat trick in the Blues’ 6-1 win over Buffalo on Veterans Day. A third round draft pick (65th overall) in the 2008 entry draft, Lehtera is something of a late bloomer, although that might be a product of his spending his entire career since the draft playing in Europe before this season, except for seven games with the Peoria Rivermen of the AHL in 2008-2009.  At 26, he does not qualify as a rookie, although he would be second in points if he did (6-10-16).  This will be his first appearance against the Capitals.

Does Barry Trotz put Braden Holtby back on the horse after his mistake led to the New Jersey Devils’ 1-0 win over Washington on Friday night?  He might just select Holtby because he has been playing well lately, his giveaway to Mike Cammalleri for the Devils’ game-winning goal notwithstanding.  In his last four appearances he has a save percentage of .947 (89-for-94) after finishing four games in five with a save percentage under .900.  He has had success in limited opportunities against the Blues (2-0-0, 1.00, .974 in two appearances).

The Caps beat the Blues twice last season, each by a 4-1 margin.  The Caps are 5-1-1 in their last seven meetings against the Blues, so it is not as if the Caps find themselves at an insurmountable disadvantage.  This will be the fourth back-to-back set of games the Caps have played in 17 games this season, though.  Even early in the season, before the grind sets it, that can’t be easy.  Still, there was enough to take away from the New Jersey game of a good nature, especially in the way the Caps battled the Devils in an ugly game, to suggest that the Caps will continue their good fortune against the Blues.

Posted by The Peerless at 1:03 AM No comments: