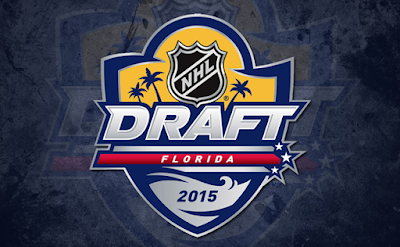 It is the last week of June, not quite Shark Week as weeks go, but to NHL fans it is "Hope Week.”  Fans of all 30 teams will be waiting fervently, hoping that when their team is called to the podium, the powers that be will announce a name that will change the fortunes of their club for the better.  Part of this week’s traditions is the publishing of mock drafts.  Far be it from the cousins or I to trivialize traditions, so we will present with all due modesty our own prognostications for the first round of the NHL entry draft in Sunrise, Florida, this Friday evening.  So cut yourself a slice of mock apple pie, and pour yourself an alcohol-free beer, and take a look at what the cousins and I came up with.


Since 2007, the Oilers have had seven top-ten draft picks, four in the top-five, and three top overall picks.  Since 2007-2008, Edmonton has not finished a season with more than 41 wins, have not finished better than third in their division, and have not made the playoffs so much as once.  You would think they cannot screw this up, picking the most highly thought of amateur since Sidney Crosby, but in the back of your mind you might be thinking that somehow they will.


In each of the last five drafts the Sabres picked from a successively higher position in the first round.  For the second straight year they get to pick second overall.  In two of the last three drafts they went for centers with their first pick, but this time they get to take a center who would be the unquestioned top pick but for the fact that this is the Connor McDavid draft.


The draft will be something of a sanctuary for Coyote fans that once more have to endure the machinations of arena politics.  This will be the Coyotes’ first top-five pick since they took Kyle Turris with the third overall pick in 2007.  After taking defensemen in the first round in three straight years ending in 2011, they have gone for forwards in each of the last three years.  They could go for defenseman Noah Hanafin here, but they won’t.


After taking centers in each of the last two drafts with the first pick available to them, the Maple Leafs look for blue line help.  The odd thing here is that Toronto has never spent a first-round pick on an NCAA player.  Hanafin just completed his freshman season with Boston College.


A few years back, Carolina did pretty well at the top of the draft.  Jeff Skinner and Justin Faulk in 2010, Victor Rask in 2011, Elias Lindholm in 2013.  More to the point, they have done somewhat better drafting forwards than defensemen, Faulk notwithstanding.  They will get a chance to add to that success here.


Starting in 2006, when the Capitals selected Nicklas Backstrom fourth overall, Washington drafted players on Swedish teams with their first pick in the first round six times in eight drafts (for the record: Backstrom, Anton Gustafsson, Marcus Johansson, Filip Forsberg, Andre Burakovsky, and Jakub Vrana).  All of them are forwards.  Only twice in the last 12 drafts have the Caps selected a defenseman with the first pick available to them: Karl Alzner in 2007 and Sasha Pokulok in 2005.  Picking a forward from Sweden would hardly be an outside-the-box pick here.

And there you have it.  Thirty young men whose dreams will come true this weekend.  Thirty general managers having put their futures in the hands of 18-year olds.  Think of it as teenagers’ revenge.

As always, do not use these picks for cash wagering, only for lining the birdcage.