By the time the Washington Capitals leave Raleigh, NC, on Thursday evening they could be a close as four points from the Southeast Division lead, assuming the Caps win both games against the Carolina Hurricanes in regulation this week, and the Winnipeg Jets do not earn four points in their two games between now and Thursday night.

It is the difference between having a strong pulse and having the last rites being said over your dying playoff hopes this season.

The Capitals have as important a home and home as they have had in recent memory this week against the Carolina Hurricanes – Tuesday in Washington and Thursday in North Carolina.  And frankly, the Caps are catching this team at the wrong time.  Yes, they are missing their cornerstone goaltender Cam Ward, who will be out 6-8 weeks with a sprained knee ligament. Yes, they haven’t had the services of Tuomo Ruutu – an 18-goal scorer last season – due to hip surgery.  But this is also a team that is 5-1-0 in the half dozen games they have played since the Caps shut them out, 3-0, on February 26th.

Is that record really as impressive as it looks, though?  Two points is two points, whether one earns them against Florida, currently in last place in the East, or against Montreal, currently occupying the top spot in the conference.  Well, it just so happens that of the five Carolina wins since last facing the Caps, two of them happen to be against Florida, 6-2 and 3-2 wins in a home-and-home to start the month.  They also have a win against Buffalo, almost as hapless as the Panthers (and Caps, for that matter) so far this season.  However, Carolina also has wins over Pittsburgh and New Jersey in this recent runs, and has only a 4-2 loss to Montreal marring their record.

Carolina has outscored their opponents by a combined 25-15 over these past six games, and they have done it largely by beating teams at 5-on-5.  The Hurricane power play is only 2-for-21 in their last six games (9.5%), while their penalty kill is 15-for-17 (88.2 percent).  Carolina has allowed two shorthanded goals in their last half dozen games, but the result is that they have outscored their opponents by 23-11 at even strength, a 2.09:1 ratio. 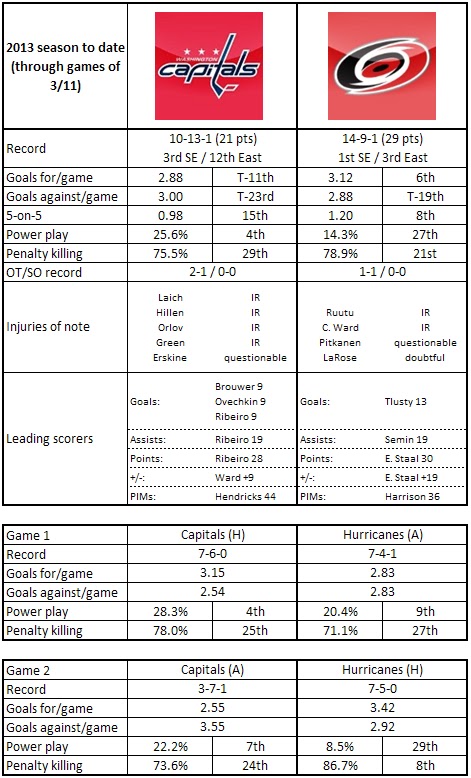 1.  Over their last six games the Hurricanes have pounded teams early to put them away.  They have outscored opponents by a 9-5 combined margin in the first periods of games and by a 12-2 margin in the second period of those games.

2.  Do you think a 13.9 percent team shooting percentage is sustainable in the long run?  Because that is what Carolina has accomplished over their last six games.  By comparison, the Hurricanes shot to an 8.4 percent rate over their first 18 games.

3.  Those nine goals in the first periods of their last six games is quite an improvement.  Over their first 18 games the Hurricanes managed only a total of seven first period goals.  The Hurricanes had similar improvement in their second period output.  Their 12 second period goals in their last six games compares to recording only 20 in their previous 18 games.

4.  Clamping down on opponents has been a feature of Carolina’ last six games as well.  But the two goals allowed in their last six games is very much consistent with their play in their first 18 games in which they allowed only 12 goals.

1.  Since shutting out the Hurricanes back on February 26th, the Caps are 3-3-0, outscoring their opponents by an 18-17 margin.

3.  It is interesting to look at the team leadership in statistics, too.  Goals then: Brouwer and Ovechkin with eight apiece; now: Brouwer, Ovechkin, and Ribeiro with nine apiece.  Ribeiro led with assists with 15 and leads now with 19.  Same for points, Ribeiro had 21 then, 28 now.  If anything, the team really is not getting much push in goal scoring from the big guys.

4.  Part of the problem…the Caps really don’t get many shots on goal compared to their opposition.  They have been outshot in 17 of 24 games this season and have a 6-10-1 record in such games.

5.  The Caps scored first against the Rangers on Sunday… and lost.  That is not news.  The Caps are 7-7-0 when scoring the game’s first goal, the third worst winning percentage in the league when scoring first.

There has been no sophomore slump for the second-year defenseman.  His 3-7-10, plus-4 grades out to an 82-game pace of 11-25-36, plus-14.  Not bad for a 20-year old former second round draft pick.  But with the goaltending situation in a state of change for the Hurricanes, it will be at least as much his play in his own end that will figure heavily in the Hurricanes’ success for the foreseeable future.

Yes, him again.  After his early and angry exit on Sunday afternoon against the Rangers, it is now a test to see how the young netminder responds.  He is often said to conjure comparisons to former Capitals’ goaltender Olaf Kolzig for his occasional fiery temperament.  Now he has to “Kolzig up” and give the Caps solid minutes as they try to make a dent in Carolina’s division lead.  In two regular season appearances against Carolina, he is 2-0-0, 0.50, .986, with one shutout, that coming in the teams’ first meeting this season.

1.  Win early.  Carolina has been playing a “short” game against opponents over their last half dozen games by getting to leads early.  The Caps need to turn that around, but it will be no small feat.  The Caps have been outscored, 7-5, in the first period over their last six games, and four of the goals they scored were against Florida.

2.  Shoot…the…puck.  Dan Ellis would appear to be the man in goal, now that Cam Ward is out for a while.  He has been the target in a shooting gallery, facing an average of 33.1 shots per 60 minutes played in eight appearances this season.  That has actually edged up in his limited duty since Ward’s injury, facing an average of 36.2 shots per 60 minutes.  His goals against has edged up accordingly, to 3.29 in that limited duty.

3.  Kill it dead.  Look, Carolina does not have an especially potent power play – 9.5 percent in the six games since they last faced the Caps.  The Caps have to be better at this over the long haul.  If 80.0 percent is the penalty killing equivalent of the Mendoza Line in baseball, the Caps have spent far too long under it.  There are no playoffs if they don’t improve here, and this is precisely the team against whom that has to start.

In the end, there is no secret here.  The Caps need two wins, period.  If they don’t get them, the ground to make up to reach the playoffs is going to be too wide, and the time left to do it too short.  These games are their season.