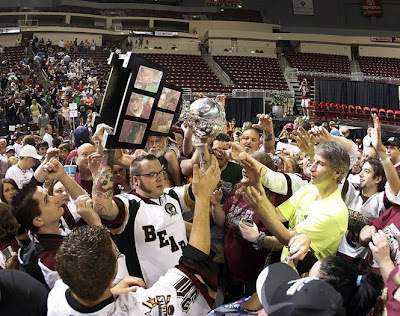 photo: Chris Knight, The Patriot-News
I feel like the uncle at the wedding.

Not that I’m not family, but the day belongs to the bride, the groom, and their parents. I get to sit off to the side, smile broadly, and take pictures.

But it’s not the same as if I was in the wedding party.

And so that’s how I feel today, as a Caps fan, as the Hershey Bears celebrate their 11th Calder Cup, their third in five seasons (four trips to the finals). It is a great accomplishment, one for which the Bears and their fans should be proud. Truth be told, though, even if the Bears are a part of the larger Capitals organization, it doesn’t feel nearly the same as if the Caps won.

And this has nothing to do with the fact that the Caps are NHL and the Bears are AHL. The Bears arguably have the more legendary history and are the platinum standard for franchise management in the AHL. It is that our emotional investment has been and remains with the Capitals. The Bears are part of the family, but for us are more the nephew, not the child into which we pour our hopes, dreams, and fears.

It was interesting to watch the players, friends and families on the ice after the game on Monday, but it was interesting to watch the fans in the stands as well. It was as if no one wanted to leave. This was a celebration of a community that went through six months of a regular season together, shared adversity as the team faced the possibility of disappointment, and then together realized the ultimate prize. It was another year in a long history of seasons of shared hopes, disappointments, and victories that has made Hershey Bears hockey, well, Hershey Bears hockey. And it isn’t the same for a Caps fan who happens to follow the Bears and appreciates the success they have forged over the years.

Perhaps it is different in a smaller community such as Hershey, where the Bears occupy such a well-earned important place, but I would hope that when (and we still think it is a case of “when”) that day comes that it is the Capitals celebrating a Stanley Cup on their own ice, the joy you could see among the fans at Giant Center on Monday will be evident in the faces of the fans who share in the celebration. Those fans who witness the victory that the players work so hard for, and that those same fans share through their support over a long, often arduous season.
Posted by The Peerless at 11:46 AM 2 comments: