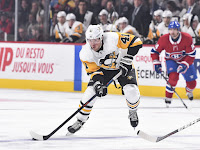 “If you find a path with no obstacles, it probably doesn't lead anywhere.”
-- Frank A. Clark

The first round of the NHL 2015 Entry Draft has a rather impressive collection of players – Connor McDavid, Jack Eichel, Mitch Marner, Ivan Provorov, Mathew Barzal, Kyle Connor, Zach Werenski.  The second round has something of a drop-off.  Sebastian Aho, Brandon Carlo, and a host of others who seem to run together.  Daniel Sprong, taken in that second round (46th overall) by the Pittsburgh Penguins is part of the “other.”  He ranks 39th in his draft class in NHL games played (97), 33rd in goals (19, tied for 19th with Pittsburgh’s fifth round pick of that draft, Dominik Simon), tied for 48th in assists (11, with the Caps’ Jonas Siegenthaler), 40th in points (30).  In the context of his draft class, Sprong seems to be a rather typical player, which is to say, “unspectacular.”

What Sprong was able to do that is unusual for a second round pick was get substantial time with the parent club in the season following his draft.  In addition to playing 33 games for the Charlottetown Islanders in Canadian junior hockey, he dressed for 18 games with the Pittsburgh Penguins in 2015-2016, potting a pair of goals for his time.  He spent the following season in Charlottetown to wrap up his junior career, then spend the 2017-2018 season split between Pittsburgh (eight games, 2-1-3, plus-2) and Wilkes-Barre/Scranton in the AHL (65 games).

It was a challenge for Sprong to get regular ice time in Pittsburgh, and after 16 games with the Penguins in 2018-2019, he was traded to the Anaheim Ducks for defenseman Marcus Petterson.  It looked as if he found his chance to play regularly in Anaheim, scoring 14 goals in 47 games with the Ducks to close that season.  However, last season he only dressed for eight games with the Ducks (1-1-2, minus-2) before he was traded once more for a defenseman, to the Caps for Christian Djoos in February 2020.

Odd Sprong Fact… Daniel Sprong is one of three players in NHL history born in the Netherlands (Amsterdam), but the first one whose first name is not “Ed.”  Ed Kea (Weesp, Netherlands) and Ed Beers (Zwaag, Netherlands) are the others.

At this point in his career, Daniel Sprong is an offensive player.  He certainly is not a bashful one.  In 97 career games he has recorded 187 shots on goal.  While 1.93 shots per game is not an especially prodigious volume, he has done this while averaging less than 12 minutes per game (11:47).  That works out to 9.9 shots per 60 minutes of ice time.  These are not “Alex Ovechkin” shooting numbers (13.8 shots per 60 minutes), but whose are?

Sprong, despite being primarily an offensive player, can go long stretches without providing offense.  In 2018-2019 he had an 11-game streak without a point for the Ducks (and a minus-6 rating) and closed that season with one point (a goal) in his last eight games.  Last season, after going 1-1-2 for Anaheim in a win over Nashville on January 5th, he went his last six games without a point for the Ducks before he was traded.

The Big Question… Who is Daniel Sprong?

Capitals fans are not unfamiliar with enigmatic players (read: “Alexander Semin”).  Daniel Sprong would appear to fit this description.  Consider when he was traded from the Pittsburgh Penguins to the Anaheim Ducks in December 2018.  The Pittsburgh Post-Gazette devoted almost half of a “20 Thoughts’ column to the player and why he was traded.  He did not get a chance from head coach Mike Sullivan.  He was blocked from advancement by Phil Kessel.  His all-around game is “average at best.”  The Penguins were too enthusiastic about his potential.  He was a bad fit with Sidney Crosby and Evgeni Malkin.  He did not do the dirty work.  His skill set did not mesh with the team.

After 55 games with Anaheim before arriving in Washington in trade for defenseman Christian Djoos last February, the questions remain to a large degree unanswered.  Is he getting (or likely to get with this team) a “fair chance” to crack the roster, especially since the Caps acquired another former Pen – Conor Sheary?  Is he going to be blocked from getting ice time by the set of wingers the Caps have, especially on the top three lines?  Has his all-around game improved?  Will the Caps be mesmerized by his offensive talents at the expense of seeing his ability to do the dirty work?  How will he fit in his third different system in three seasons?  Like we said…”enigma.”

It might be a stretch to think that Daniel Sprong is getting his last chance to crack an NHL roster at age 23 (he will turn 24 in March), but he is running out of time.  This is a player who, for whatever reason, could not get a regular shift in Pittsburgh, went to Anaheim only to be waived in September 2019 (he cleared and was sent to the minors), played in only eight games with the Ducks last season before he was traded, and spent the end of the 2019-2020 season with the Hershey Bears (1-5-6, minus-1, in five games).  He appears to have the offensive skills to play regularly in the NHL, but it is also apparent that the deficiencies in other aspects of his game serve as obstacles to his being an NHL regular.  Developing a more rounded game will be something to watch in Daniel Sprong’s development this season.