The Peerless Prognosticator is ON THE AIR!!! -- Game 17: Penguins at Capitals, November 10th

What’s that smell?  It smells vaguely like coal ash and…herring?  That must mean the Pittsburgh Penguins are coming to town.  That’s right, Caps fans, the dumpy skating penguin logoed team from The Confluence (featured as the underground river of slime in “Ghostbusters 2,” or so we are told) waddle into Capital One Arena on Friday night to try to put some more distance between themselves and the Washington Capitals in the Metropolitan Division Standings.

The Caps are currently on the outside, looking in at playoff eligibility, and if you think such considerations are too early to…consider, remember who is in and out of the mix on November 1st actually matters (see “Thought 29” here).

Through Wednesday night’s games the Penguins sat atop the Metropolitan Division, but then again, no team in the division has played more games than the Pens so far (17), either.  New Jersey was one point back with three games in hand going into Thursday, Columbus was one point back with a game in hand, and the New York Islanders were two points back with two games in hand.  Only four points separated the top seven teams in the division on Thursday morning.  It is a crowded division at the top.

Evgeni Malkin has done the most damage to the back of opponents’ nets in road games this season with five goals in 11 road contests.  He had all of them in a six game stretch from October 17th through November 1st, although the Pens managed just a 3-2-0 record in those games in which he had a goal (two of those five road goals are game-winners, but the Pens are just 3-3-1 in the seven road games in which he has a point).  He opened the season without a goal in his first three road games and is without one in his last two.  Malkin is 16-35-51, minus-1, in 37 career games against the Caps.

Phil Kessel leads the club in total points on the road so far this season (2-10-12 in 11 games).  It is a bit out of character for Kessel, who over his career had significantly more success in home games (166 goals and 353 points in 423 games played on home ice) than on the road (135 goals/315 points in 426 road games).  He has been consistent on the road this season, too.  Kessel has points in eight of 11 road games, but the Pens are just 3-5-0 in those games.  What he did not have this season was a point in the first meeting of the teams this season, in Washington, a game that Pittsburgh won, 3-2, back on October 11th.  In 40 career games against the Caps, Kessel is 8-18-26, minus-7.

Last season, the Penguins suffered through quite a few injuries, but to the extent they hit the goaltenders, they weathered that storm pretty well.  Matt Murray (47 starts) and Marc-Andre Fleury (34 starts) started all but one regular season game for the Penguins (Tristan Jarry got the other one).  This season, with Fleury a member of the Vegas Golden Knights, the Penguins have already dressed four goaltenders, three of them getting starts, and one of those three – Antti Niemi (0-3-0, 7.50, .797 with the Pens) – waived and claimed by the Florida Panthers.

Murray is the undisputed number one goalie, and a good one he is.  His regular season numbers are a bit of a mix, his 2.43 goals against ranking just 18th among 52 goalies playing at least 50 games over the last three seasons and his save percentage of .921 ranking fifth in that group.  His playoff numbers are another story.  Of 17 goalies appearing in at least ten postseason games over the last three seasons, Murray’s goals against average (1.95) ranks second, and his save percentage (.928) ranks third.  His four shutouts are tied for first in that group.  But, valuable as he has been in the postseason, he has had injury issues.  A head injury, a broken hand, and a lower body injury (twice) are on his record, the latter of those lower body injuries causing him to miss Pittsburgh’s last 11 playoff games last season.  He has started 13 of the team’s 17 games so far this season and has rather ordinary numbers (2.90/.906 with one shutout).  He has been even worse in recent road games, going 1-3-0, 3.71, .875 in his last four road appearances, alternating good performances (against Minnesota and Edmonton) with awful ones (against Winnipeg and Vancouver).  In five career appearances against the Caps, Murray is 3-2-0, 3.88, .870. 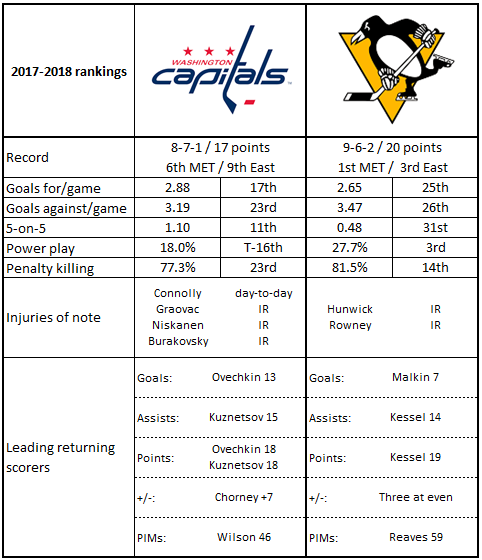 1.  This will be the Penguins’ 12th road game this season, tying them with the Detroit Red Wings for most in the league.  They are 4-6-1 in 11 road contests so far.

2.  If you’re going to get the Penguins, get them early.  The 22 goals they allowed in the first periods of games this season is second-most in the league through Wednesday’s games (Montreal: 24).  The 19 goals allowed in the second period is tied for sixth-most.

4.  Only three teams have allowed five or more goals in a game more frequently than the five times the Penguins allowed that many (Arizona: 8; Florida and Toronto: 6 apiece).

1.  This game is the first of a two-game home stand for the Caps in what will be their first two consecutive games played at home this season.

2.  The Caps scored six goals in their home opener this season, a 6-1 win over the Montreal Canadiens.  They have 10 goals scored in five home games since then, nine in regulation.

4.  The Caps do well playing games close.  They are 5-2-1 in one-goal decisions, the five wins ranking tied for third in the league, behind only Pittsburgh (7) and Tampa Bay (6).

5.  The Caps do not score first often.  Maybe they should try doing it more frequently.  They are 4-0-1 when scoring the game’s first goal, tied for the fifth-best winning percentage, but only the New York Islanders scored first fewer times so far, going undefeated in four such games.

Brooks Orpik is not going gently into that good night of his career.  In fact, he is averaging more ice time (22:38) than in any season of his 15-year NHL career.  It was not supposed to be that way, the Caps using Matt Niskanen, John Carlson, and Dmitry Orlov to take big chunks of minutes.  After Niskanen was injured on October 13th, Orpik stepped up in ice time, going from 22:03 in his first six games (the last of which was the one in which Niskanen was injured) to 22:54 per game since.  The ice time load seems to have agreed with Orpik so far, the Caps with a 4-0-0 record in games he skated more than 24 minutes, 6-2-1 in games in which he skated more than 22 minutes.  What he won’t do is provide much in the offensive end.  He has shots on goal in just five of 16 games so far (only six defensemen among 179 playing in at least ten games have fewer than his seven shots) and points in only three, all of them on the road (the Caps are 1-2-0 in those games).

It’s just a division game…it’s just a division game…it’s just a division game.  More than that, and even more than it is a division game against the Penguins, it is a home game.  And no team has a worse standings points-to-games played ratio in home games in the Metropolitan Division than the Caps (six points in six games, same as the Carolina Hurricanes).  Keep in mind that from the 2007-2008 season through last season, only one team in the league (Pittsburgh, as it turns out) won more games on home ice (256) than the Caps (253).  They simply have to be more productive in the offensive end to turn that 3-3-0 into the right direction.  The three wins came when they scored three or more goals, while the three losses came when they didn’t reach that three-goal mark.  The Penguins have allowed seven or more goals in three of their 11 games this season.  The Caps might not get there in this game, but they are facing the team that is 31st – dead last – in the league in goals for to goals allowed ratio at 5-on-5.  It could be a breakout game of sorts.