It was Scrimmage, Part Deux for the young prospects at Capitals Development Camp this afternoon and a chance for the Banshees (Group B) to exact a measure of revenge against the Aardvarks (Group A).

Well… that was the plan.

And it looked like a great plan early, as the Banshees at least stood their ground in a scoreless first period (we’re back to 20-20-20 minutes). But the score, or lack of it, was a bit deceptive. The period was played almost entirely in the Banshee end of the rink, and goalie Garrett Zemlak was peppered early and often. He was called up on early as the Aardvarks mounted a challenge, crashing the net, where the puck eventually lay near the goal line. Zemlak dove on it barely 80 seconds into the scrimmage to keep the Aardvarks off the board. It was a fine imitation of Dominik Hasek, as Zemlak rolled over on his back and threw his arm out to smother the puck.

Dmitri Orlov would get a chance for the Banshees later in the period as the puck was sent across to him with some open ice in which to shoot. But Orlov couldn’t get good composite on the one timer (once upon a time, that phrase would have been “good wood”), and goalie Dan Dunn turned it aside.

The first period ended scoreless, but the Aardvarks held a 12-4 advantage in shots.

Luck would smile on the Banshees in the second period, despite the lopsided edge in shots for their opponents. Eric Kattelus got the Banshees on the board early to give the blue squad a 1-0 lead. The game was tied not long after, though, as Michael Dubuc did the honors for the Aardvarks. The Banshees regained the lead, though, with a pair of tallies to take a 3-1 lead to the second intermission. One of them was a sweet goal by June draftee Cody Eakin, who took a nice feed from John Carlson and cleanly snapped the puck home.

The best laid plans, as they say, often go astray, and they really jumped the shark in the third period. Andrew Glass, Everett Sheen, Joel Broda, Garrett Mitchell, Mathieu Perreault, Perreault again, and Dubuc put a hurtin’ on Dustin Carlson, who fought the puck but also suffered some indifferent play in front of him as Aardvarks were winning races to the net.

There was quite a scare in the third period as several players got tangled up in front of Aardvarks goalie Braden Hotlby. Anton Gustafsson appeared to bang the crossbar with the side of his head, opening a gash and leaving him on all fours on the ice for several moments as medical personnel trotted onto the ice to provide assistance. The play unfolded right in front of us, and Gustafsson looked very woozy as he was being administered aid. It was a nasty gash that left some blood on the ice that had to be cleaned up as Gustafsson was helped off, a towel applied to the side of his head. He was taken to the locker room and did not return to the bench.

Although it was Banshees carrying the play early, the Aardvarks kept rooting around for pucks until they could open the floodgates on Carlson. Aardvarks 8 – Banshees 3 (Aardvarks lead, 2-0 in scrimmages).

Here are a few pics of the action… 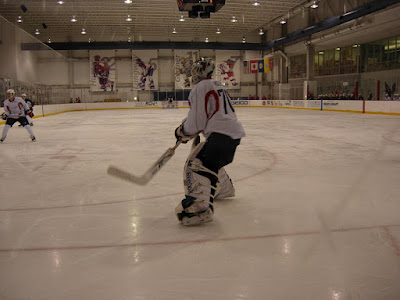 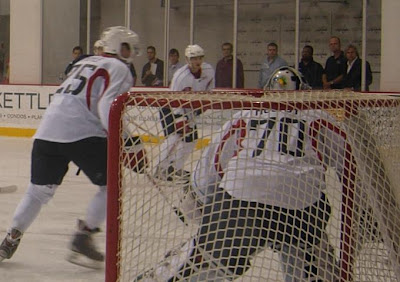 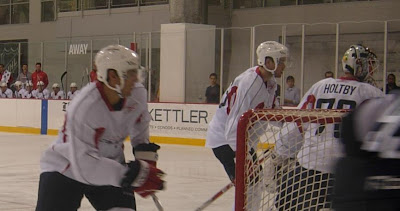 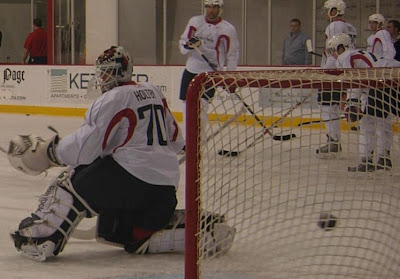 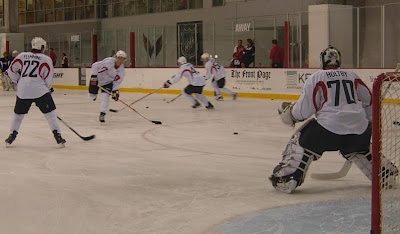 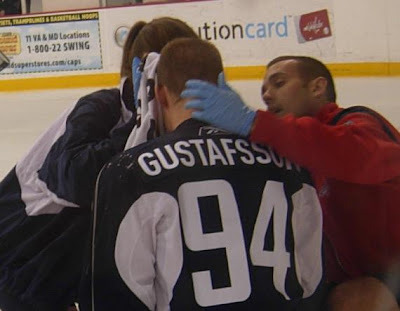 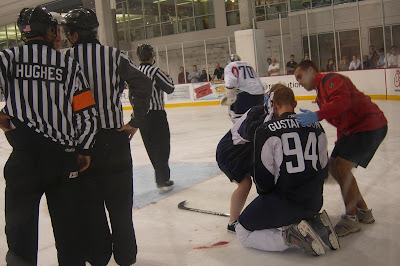 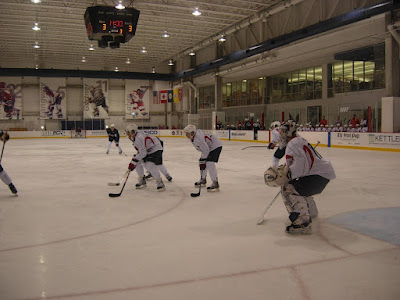 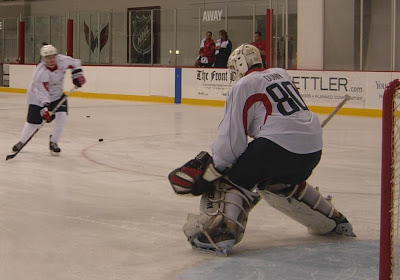 The 2009-2010 NHL schedule came out yesterday, and there is enough commentary on it to suit most any Caps fan. Still, there was one thing about it that struck us as interesting. And it goes back to last year. You will recall that in the dying weeks of the 2008-2009 regular season, the Caps beat up a lot of tomato cans (it’s a boxing reference… look it up). For example, the Caps played 19 games from March 1st through the end of the regular season, and during that time…

- Five of the 19 games were against playoff-bound teams.

- They played playoff-bound teams in consecutive games only once (Philadelphia and Carolina on March 12th and March 14th).

- They played a playoff-bound team only once after March 14th (Carolina on March 21st), none in their last eight games.

- Of the five games played against playoff-bound teams, three of them were against Carolina. The other teams faced were Pittsburgh and Philadelphia.

- The Caps were 2-2-1 against those five playoff-bound teams.

- Of their last 12 games, the Caps played lottery teams (bottom five in the league) seven times.

It wasn’t the highest caliber competition for the Caps heading into the post season. Did it play a role in what some might consider an early exit? We can’t say for sure, but what we can say is that it should not be a factor this season. The Caps will play 20 games from March 1st through the end of the regular season. Of that number…

- Twice they will play three playoff teams from last year in succession (Pittsburgh/Carolina/Calgary from March 24th-28th and Columbus/Boston/Pittsburgh from April 3rd-6th).

- In their last ten games, the Caps will play playoff teams from a year ago seven times.

- Of the 11 games against playoff teams, the Caps will play Carolina three times. The other eight are against teams outside the Southeast and include the Stanley Cup champion Penguins twice and Eastern Conference regular season leader Boston twice.

- The Caps will have five games against lottery teams, but two are against Atlanta (which gave the Caps problems last year), and the other three are against Tampa Bay.

… or for elimination from the playoffs.

It won’t lack for interest.
Posted by The Peerless at 1:52 PM 1 comment:

...and mark your calendars.

Celebrities (Brian Pothier, Slapshot!), silent auction, hockey, a good cause... hey, what could be better in July?

And if you need a reminder of the hard-fought tilt last year, then check this out.

Here is the press release on the event...

“We have received amazing support from the Capitals organization, Hockey Fights Cancer and the entire community,” declared Rob Keaton, PCOI co-chair. ”The players are thrilled to take the ice alongside some of the Caps greats and look forward to hearing their names called by Caps game announcer, Wes Johnson who will be on hand to call the game.”

“What started out a few years ago as a casual, monthly pickup hockey game among Caps fans has developed into a charity that we all are excited to be a part of,” explains PCOI co-chair, Gavin Toner. “We are honored and excited to hold this event in recognition of Dave Fay. His support of our sport and unbiased, reliable reporting of the Washington Capitals made him a favorite of players and fans alike. Dave’s untimely passing from cancer was a loss for so many and we are pleased to again donate all proceeds from this event to Hockey Fights Cancer.”

There is no admission fee to watch the game, but donations are always appreciated.

For a list of auction items and event information, visit the organization’s website at http://www.putcanceronice.org/.
Posted by The Peerless at 10:09 AM No comments:

Evolution at the Speed of Thought

There is another “rebuild” of sorts going on in Caps Nation, and it isn’t on the ice (even if what is on the ice is often – although not always – the focus). Or maybe it’s just a “build.”

If you haven’t been paying attention these last few days and weeks, there is a “grass roots” building of coverage infrastructure that has fairly exploded across Caps Nation. Start anywhere you like…

OK, start with the usual suspects. We’ve had “Capitals Insider” and “In the Room” for a while now, but although they are “blogs” in the more traditional sense of the term (we’re already using the term “traditional” with respect to blogs?... my, but the world moves fast these days), they already have the vague sense of being somewhat quaint. That isn’t any dig at Tarik El-Bashir, Corey Masisak, or any of their colleagues. They do really fine work. And beat reporting is still the first, consistently best source of information on the team. But…

We have all these other blogs… Japers, OFB, Capitals Kremlin, A View from the Cheap Seats, and others (check over there on the right margin for some of them). These folks have been working at their craft for a little while now, and all have carved for themselves a healthy niche in Caps Nation, providing new and unique perspectives on the team. But…

Here is where things get interesting. In a short time, we’ve seen fans jumping into the fray with impromptu video (some of the stuff being posted on the Caps “unofficial” message boards is interesting, as well as what Reed-CK is doing over at Capitals Kremlin – real-time posting of the what’s and the who’s from Kettler during development camp). And…

There is “Twitter.” We’re not entirely sold on the concept as revolutionary, but it has been a tool used by many to “real-time” their thoughts and observations of what is going on, either at camp or with respect to the latest moves the Caps are making (tweets on the Jeff Schultz contract situation have become a cottage industry in a matter of hours).

We want to reserve a special comment for some really fine work, too. If you haven’t taken a look through the photographic work being done by Jimmy Jazz over at Tic-Tac-Toe Hockey and TTT Photo, do yourself a favor and page through his work. Today’s images of Braden Holtby and the "search and destroy" look in Joe Finley's eye are just examples of the fine imagery you’ll find. He certainly has a knack and a keen eye.

What seems like a long time ago (August 30, 2006 it turns out), a “Guidelines for Granting Press Credentials to Bloggers and Other Online Media Representatives” was published at Off Wing Opinion. Today, however valuable they are or might have been, they seem like the Articles of Confederation of 1781. Fans have taken their own paths to covering the team they follow, “guidelines” be damned. And those paths have trampled on some traditional methods of covering teams that yesterday were considered cutting edge. We feel positively ancient writing this blog in the shadow of embedded video and Twitter. And we’ve been at this for less than four years.

We have no idea where things are headed. It would be a fool’s errand to try and predict or anticipate such things. One thing we’ve learned in doing this over the last four years – it won’t be “managed.” Twitter is barely three years old, although as a phenomenon its life might be measured more in weeks or months. A year ago, no one ever heard of SB Nation; today, it is as close to a media colossus as there is in the blogosphere.

When Albert Einstein was but a teenager, he pondered the idea of what a beam of light might look like if you rode a bicycle next to it. Well, take a look… things seem to be changing that fast.
Posted by The Peerless at 7:43 AM 10 comments: