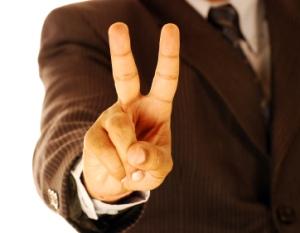 The Florida Panthers made their second visit to Verizon Center this season on Sunday hoping that it would end better than their first visit, a 6-1 whipping delivered by the Washington Capitals back on October 15th.  For the Panthers it was a chance to salvage a .500 road trip after dropping their last two road contests in Calgary and Edmonton.  The Caps were looking to get back on the winning track after dropping a pair of their own, losing a home-and-home set against the New York Rangers, even though they grabbed a point in an overtime loss on Friday.

Although one might have expected the Panthers to be sluggish after spending their last three games in western Canada, they scored on their first shot on goal when Tomas Kopecky blasted a slap shot between goalie Braden Holtby’s body and left arm at the 22-second mark of the first period.  Things got worse for the Caps as they started a march to the penalty box.  Jay Beagle went off at 2:28 for tripping.  Marcus Johansson followed him there at 5:08 on a hooking call.  At 11:56 it was Mike Ribeiro for tripping.

The Panthers could not convert on any of their three first period power play opportunities, though.  Holtby kept the Caps in the game turning back all of the Panthers’ shots after that opening goal.  Unfortunately, the Caps could generate little offense of their own having spent six minutes killing penalties in the period.  The teams skated off with the Panthers holding a 13-5 edge in shots and a 1-0 lead on the scoreboard.

The second period did not start any better for the Caps.  Alex Ovechkin went off at 2:18 for elbowing to give the Panthers their fourth power play in less than 23 minutes.  Holtby and the Caps kept the Panthers off the scoreboard on this power play, too, earning them a standing ovation from the Verizon Center crowd as the final seconds of the penalty ticked off.

When the Caps received their first power play of the game at 5:01 of the second period, courtesy of an interference penalty by Filip Kuba, it looked as if the momentum might change.  It was not to be as the Caps failed to record a shot on goal over the two-minute man advantage.  Making it worse was the Caps finding that path to the penalty box once more.  Mathieu Perreault went off at 10:04 on a hooking call, and then Joel Ward was shown the gate on a holding call at 17:11.

Then the game took a turn toward the bizarre.  Tomas Fleischmann had an apparent goal overturned on a video review when the replay showed that his wrist shot hit both the post and crossbar without crossing the goal line.  Moments later Karl Alzner picked up a loose puck along the wall and sent it out of the Caps’ end.  On its way down the puck hit seam along the boards and changed direction.  Panther goalie Jose Theodore had already circled around his net to collect the puck and was now out of position as the puck darted toward the Panther net.  Theodore lunged out to try to get his stick on the puck, but was a moment too late to prevent the tying goal at 18:08 of the second period.  That was how the period ended, the Caps and Panthers tied, 1-1.

The late goal for the Caps seemed to change the momentum of the game, if only to stop their parade to the penalty box.  It was the Panthers who were whistled for an early penalty in the third period, Fleischmann going off at 2:01 for hooking.  The Caps could not solve Theodore on the power play, but the Panthers could not clear the puck out of their zone.  An attempted clear by Jack Skille was gloved down by John Carlson.  The defenseman wristed a shot that Theodore could not find through a screen, and the puck settled behind him to give the Caps their first lead of the game at 4:19 of the period.

The Carlson goal seemed to take the wind out of the Florida sails.  Even though the Panthers were getting shots to the Capitals net, Holtby was getting good looks at them and turning pucks away without undue effort.  As time grew short the Panthers started taking more chances in an effort to get pucks deep and get Theodore off the ice for an extra attacker.  Theodore was at the hash marks ready to come off as the clock passed the 90 seconds remaining mark.  The Panthers failed to get the puck deep enough, though, to give Theodore the chance to get to the bench.  It gave Nicklas Backstrom a chance to break out with Alex Ovechkin.  Backstrom fed the puck up to Ovechkin, who slid it back to Backstrom as he entered the Florida zone.  Backstrom faked sending it back to Ovechkin one last time and wristed the puck on the short side over Theodore’s blocker to close the scoring and give the Caps a 3-1 win.

Notes:  Michal Neuvirth is expected to miss another week with a “lower body” injury… The 37 shots faced by Holtby in this game was topped just once in his regular season career, a 40 save/41 shot effort in a 2-1 win over Carolina on March 11, 2011… The shorthanded goal by Karl Alzner was his fifth career goal and first special teams score. 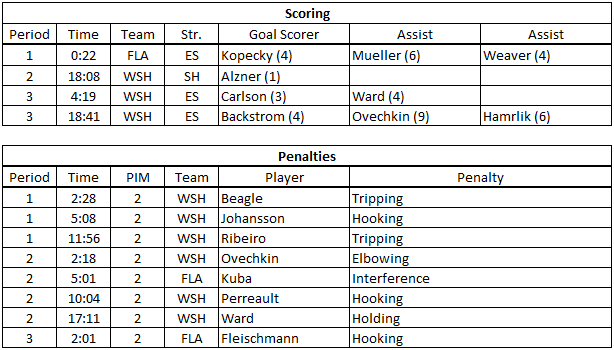