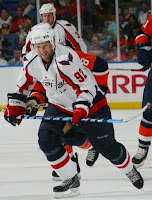 Next in our long, slow cool-down from the season…

Michael Nylander was arguably the prize of the off-season free agency acquisitions for the Capitals, coming to the club in – if not a shroud – then at least a light wrap of controversy. It was a story that took just about an entire season to play out. As for Nylander’s production for the Caps, in the end he might have been missed in more than he was productive for the Caps.

That was a product of injury – a shoulder injury that Nylander played with for at least six weeks finally put him on the shelf for good in mid-January. It is entirely likely that the injury affected Nylander at the offensive end – he took only 12 shots in the last ten games of his season (although he did score four goals on that small number of shots). And, it seems certain that it affected his ability to compete in the defensive zone. Nylander was a minus player in each of the ten-game splits of his abbreviated season, but he was -12 of his -19 for the year in the last 20 games. His -19 represented a career-worst in that statistic.

The injury came just as it seemed Nylander was starting to mesh with his new teammates. In the first ten games of the year, he managed only one multi-point game. In the second ten he had four. He had two more during his third ten-game stretch, when he appears to have suffered his injury.

If there is something that one can take from the 40 games Nylander played, it is consistency, even in the face of injury. Points, penalty minutes, power play goals. Even in faceoff he held his own as best he could – winning at least 50 percent of the draws he took 21 times (no more than six in any ten-game split, no fewer than four). Even playing in 40 games, he stood fifth in total draws taken for the year.

That Nylander battled as long as he did with such an injury is testimony to his tenacity as a player – he still managed four multi-point games in his last ten-game stretch. But in a way, it might have served to accelerate the development of Nicklas Backstrom, who was the clear number one center when Nylander’s season ended.

Nylander will be coming into next season – well, maybe – as the number two center. He might be coming into the season ahead of where he was last year, with a lot of new teammate’s tendencies to learn, but he still might need a fair part of the early season to get into a groove. The Caps were starting to see that just as he sustained his injury. The Caps were 25-10-3 after Nylander’s season ended, suggesting that adding him next fall could be a little like a free agency addition.

However, the Capitals will, it would seem, have decisions to make with respect to re-signing Sergei Fedorov for next season. That could influence Nylander’s role on the club and whether he would be dangled as trade bait. That is a mind exercise for a different day. As for this season, Nylander’s had to be graded “incomplete.”