The Peerless Prognosticator is ON THE AIR!!! -- Game 45: Capitals at Blues, January 19th

The Washington Capitals, escaping the Twilight Zone of PPG Arena in Pittsburgh with a standings point after their 8-7 overtime loss to the Penguins on Monday night, head west to St. Louis to face the Blues on Thursday night.

For the Capitals, it is an opportunity to get back to the steady, stout defense/solid goaltending/opportunistic offense that got them a nine-game winning streak.  As it is, they will take an 11-game points streak into this contest (9-0-2).  On the other side, the Blues have been struggling of late, going 2-2-1 in their last five games.  It is part of a prolonged stretch in which St. Louis has not been able to establish much winning momentum.  Their consecutive wins over San Jose and Anaheim on Saturday and Sunday were their first consecutive wins since winning three in a row to end November and begin December.  In their last 21 games they are 9-10-2.

Scoring, or more accurately “balance” in scoring has been something of an issue with the Blues over their 2-2-1 record over the last ten days.  They do have 14 goals in those five games (2.80 per game), but four of them have come from Patrik Berglund.  On Tuesday, Berglund became the 11th player in Blues history to appear in 600 games.  He, Brian Sutter, and Barclay Plager are the only players to appear in at least 600 games in their career and play their entire career in St. Louis (in Berglund’s case that should be qualified with “so far”).  Berglund eclipsed in 45 games his total goals scored last season (10) when he tallied a goal against Ottawa in Tuesday night’s 6-4 loss to Ottawa.  That goal also tied him with Perry Turnbull for 15th place on the list of all-time Blues goal scorers.  Only three of those 139 career goals for Berglund have come against the Caps.  He is 3-2-5, even, in 10 career games against Washington.

David Perron leads the club in total scoring over the last five games (1-4-5).  For the well-traveled Perron (four franchises in ten seasons), this year represents a return to the team that drafted him 26th overall in the 2007 entry draft.  He played six seasons in St. Louis before heading to Edmonton, Pittsburgh, and Anaheim before signing a two-year, $7.5 million contract with the Blues last summer.  He has been a reasonably productive scorer in a secondary role over his last 14 games after going eight games without a point in early December.  He is 4-5-9, even, over those last 14 games.  In 13 career games against the Caps, he is 0-7-7, plus-2.

Being a goaltending in the NHL is not easy.  Being a goaltender who never has a slump is next to unheard of.  Consider Jake Allen.  Things were going rather well for the four-year veteran, posting a record of 14-5-3 (one no-decision), 2.39, .910 with one shutout in his first 23 appearances.  Then he allowed five goals on 33 shots in 50 minutes in a 6-3 loss to Nashville on December 13th.  Starting with that game, Allen is 3-6-0 (one no-decision), 3.77, .878 in 10 appearances.  It has been even worse more recently.  In his last five games he has allowed 13 goals on 91 shots (.857) and was pulled three times.  Carter Hutton stopped the leaking briefly, winning twice in three appearances in relief of Allen, allowing just three goals on 56 shots with a shutout over San Jose included.  But he yielded five goals on 23 shots in the 6-4 loss to Ottawa in his last appearance.  Allen has a 32-save shutout in his only career appearance against the Caps, while Hutton is 2-2-0, 3.44, .877 in four career appearances against Washington. 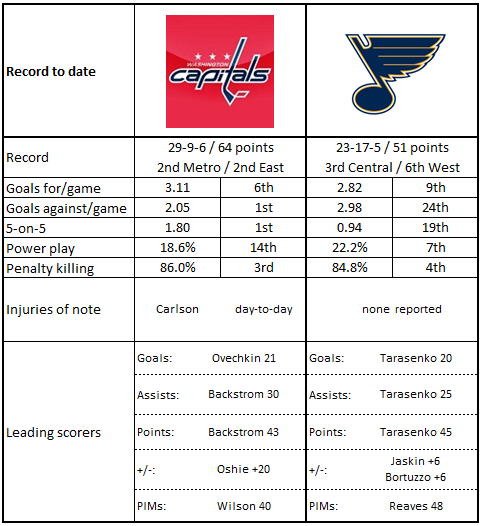 2.  Getting shots on goal does not seem to be the Blues’ thing. No team has had more games with 25 or fewer shots this season than St. Louis (19, tied with Nashville).  They are 7-10-2 in those games.  Then again, holding opponents’ shot total down is a Blues’ thing.  They have the fourth-highest total of games allowing 25 or fewer shots (17) with a record of 11-5-1.  Such things are not unusual for Ken Hitchcock-coached teams.

3.  The sparse shot totals seem to play well into a narrative of close games involving the Blues. Such contests have favored St. Louis, the third-best team in the league in one-goal game winning percentage (12-2-5/.632, tied with Columbus).

4.  Scoring first is as good a predictor as any as to who wins and who loses in the NHL, and by that standard St. Louis is not a particularly successful team. They are 11-6-3 in games in which they score first, but their .550 winning percentage ranks just 24th in the league.

5.  St. Louis is a particularly stingy team in allowing shot attempts on home ice. Their 49.03 attempts allowed at 5-on-5 on home ice is fifth fewest in the league (numbers from Corsica.hockey).  But there is a catch.  Of the four teams with fewer attempts allowed, only Boston and Los Angeles are playoff-eligible at the moment, and the Kings are hanging on by a tie-breaker.

1.  We heard the hosts of an afternoon radio show ask out loud the other day just how many 8-7 games had been played in NHL history. Well, the Capitals and the Penguins played the 139th game in NHL history in which at least 8 goals were scored and at least 7 goals were allowed.  It was the first one in more than five years (Winnipeg beat Philadelphia, 9-8, on October 27, 2011).  As for games with precisely that score, it was the 42nd time it was done in NHL history, the first time in more than six years (Tampa Bay over Philadelphia, 8-7, on November 18, 2010).

2.  Even with the bizarre loss after taking a 3-0 lead against Pittsburgh, the Caps have the second-best winning percentage in the league when scoring first (.774/24-3-4).

3.  That game (which will henceforth be referred to in Capitals Nation as “that $#@% game,” the way Red Sox Nation refers to “Bucky $#@% Dent”) was the sixth in Caps history in which the Caps scored at least seven goals and lost. It was the first time they did so since October 11, 1988, when they lost…8-7…to the Penguins…in Pittsburgh (Mike Ridley had four goals in that game for the Caps).

4.  The Caps have allowed just 55 goals at 5-on-5 this season, ten fewer than the club with the second-fewest (Minnesota Wild: 65).

5.  In the “can they sustain this” category, the Caps have the third-best shooting percentage at 5-on-5 in road games this season (9.03; numbers from Corsica.hockey). Only Minnesota (9.46) and the New York Rangers (9.27) are better.  The Caps also have the second-best save percentage at fives on the road (93.62 percent).

We hesitate to mention this guy, because it seems when we ponder a guy, he ends up doing something (just coincidence, probably, but indulge our self-importance).  Over his first 40 games he recorded 20 goals and seemed a good bet to improve on his goal scoring for a fifth consecutive year (from 8 in 38 games in 2012-2013 to 21 to 37 to 40 last season).  However, he is without a goal in his last five games, his longest streak since going six games without one to end October and begin November.  He does like home cooking, though.  Thirteen of his 20 goals have come in 26 games on home ice.  As with a lot of goal scorers, managing his shots against is something to look for.  In the 18 games in which he has four or more shots on goal this season, he has 13 goals.  Not letting him get all fat and happy about himself could be a key here.  Tarasenko is 5-1-6, plus-6, in six career games against the Caps, and his 20.8 shooting percentage against Washington is topped only by that against Boston (21.4 percent in seven career games).

One thing you have to say about 2017 for Braden Holtby, so far…it hasn’t been dull.  He is 6-0-0 (two no-decisions), 1.74, .939, with three shutouts in eight appearances in the new year.  And that is after getting lit up for five goals in a span of 8:09 of the second period against Pittsburgh in “that $#@% game.”  Seems the key to his success is finishing games.  In the six games he started and finished, he is 6-0-0, 0.67, .975, with those three shutouts.  This is one of those times when you look and see just how cold-blooded a player is, to be able to compartmentalize that performance against the Penguins, wad it up, and throw it in the trash, never to pollute his mind-set again.  It’s like that cornerback who gets beat on a deep ball and shrugs it off on the next series, or the closer in baseball who gets lit up in a save situation, then comes back the next game an mows down the batting order as if it never happened.  Holtby is at his best after bad games.  And so far this calendar year, when he’s around at the final horn, he’s been amazing.  He is 4-0-0, 1.50, .949 in four career appearances against the Blues.

The Caps are in something of a “glass half full/glass half empty” situation.  Yeah, they allowed six goals to the Penguins in that second period, but on the other hand, they came back from a goal down in the third period twice.  Sure, their winning streak got stopped, but they have points in 11 straight games (9-0-2).  Yeah, they allowed eight goals, but on the other hand they scored five or more for the seventh time in ten games.  Yeah, their goalie was lit up, but he’s still got a goals against under 2.00 for the season and a save percentage of .930.  Yeah, losing to the Penguins sucks, but on the other hand the Caps were 2-0-2 against them this season and are five points clear of them in the standings.

It leaves the Caps at a fork in the road, one path being a let-down after a long winning streak (see: Blue Jackets, Columbus) or getting back to business.  And as we all remember the great catcher and philosopher Yogi Berra reminding us, “If you come to a fork in the road, take it.”  Take it by the throat.