We go to the vault in search of...

...Roenick!
Sounds like a 1970's detective show like "Mannix" or "Cannon," doesn't it? But anyway, this being August, which means no hockey news (except Jeremy Roenick's retirement), we went back -- way back -- in the vault for old tyme Peerless Prognostos that we used to post on The Official (before they turned into this) and came upon this one starring Roenick, from way back in November 2003... 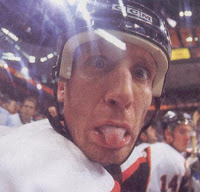 Welcome, hockey fans, to another . . . yes, ANOTHER edition of The Peerless Prognosticator, this time brought to you by . . . the National Public Radio, whose word for today is “YIPPEE!”

Re”Cap” of Caps versus Lightning . . . unbeaten, eh? . . . Toast of the NHL, eh? . . . yeah, so’s yer mother. Caps lulled the Lightning into a false sense of superiority, allowing the Bolts to get an 18-7 edge in shots in the opening frame, but one shorthanded speed rush by Dainius Zubrus around Brad “Traffic Cone” Lukowich, and the Lighting had a glimpse of what the night would hold. From there, it was Lang, Halpern, Jagr, and of course, the obligatory “off-a-random-body-part” goal from Zubrus before an inconsequential goal from the resident smurf, and when coupled with a 41-save performance from the big guy, the Caps had their first road win of the year, a 5-1 Thrashing (oops, wrong team) of the Lightning. OK, now get over it, because it’s time to face the music . . . 0-9-1 in their last ten in the brotherly confines of Philadelphia, so let’s get to the prognostications . . .

First Period . . . The Flyers are wearing their orange “Rollerball” jerseys, causing several hundred fans to go into seizures. The Caps are in white, which is a color often associated with sacrifice. This being South Philly, the connection is easy to make. Why, there is even a “raw meat” concession here at Wachovia (hehehe) Center.

As the teams are readying for the contest, over at the Capitals’ bench a grim-looking fellow in a suit, wearing sunglasses and an earpiece nods at Coach Cassidy . . .

The puck is dropped and the Flyers take aim at the Caps . . . Todd Fedoruk lines up Sergei Gonchar for a bone-rattling check, but Gonchar spins away adroitly and Fedoruk is left sampling the glass platter at Chez Wachovia. Gonchar sends the puck ahead to Robert Lang, who forwards the mail to Jaromir Jagr, who wrists the package past Jeff “I-don’t-know-if-I-can” Hackett. Inside of a minute, and the Caps have a lead . . .

The Flyers try once more their efforts at intimidation . . . Eric Weinrich takes a run at Dainius Zubrus, but as Zubrus shifts into a higher gear, Weinrich ends up over the players’ bench and with a fine view of Justin Williams’ lap . . . Zubrus curls in and leave Hackett trying to whack it as he packs it into the Flyers’ net, and the Caps have (celestial choruses sing) . . . a two-goal lead . . . AGAIN!

At the Caps’ bench, the sunglasses presses the earpiece as if he is getting a signal and motions to Cassidy. Cassidy taps the shoulders of the Federal Reserve Line, and they hop out once more. Jagr spies Bondra darting to the net from the back side and lays the puck right on his tape for an easy tap-in . . . the clock can’t run down fast enough for the Flyers and Ken Hitchcock to figure out what’s happened . . . the teams skate off, Caps leading 3 - 0.

Second Period . . . The Flyers come out even more determined to let the Caps know whose house they’re in . . . Jeremy Roenick tries to plant a shoulder into Steve Eminger, but the slick-skating rookie spins the other way, leaving the cameraman in the corner with an excellent shot of Roenick’s cheek denting the glass . . . “make sure you get my good side,” Roenick mumbles as Eminger heads up ice. Eminger sends the puck across to John Gruden, who chips it into the zone for the barnyard dogs of the fourth line to go fetch. Brian Sutherby outduels Chris Therien for the puck and backhands it in front . . . Boyd Gordon whiffs on the chance, but Stephen Peat is johnny-on-the-spot to chip the puck over Hackett’s blocker, and the Caps have a four goal lead for the second time in three days.

Hitchcock is bewildered on the Flyers’ bench . . . trying to create some offense, he juggles lines, but the Flyers continue to struggle just to get into the Caps’ zone. Flyer fans being, well, Flyer fans, the booing makes Wachovia (hehehe) Center sound like a convention of prize Guernseys (those are cows, folks). It only gets worse when Roenick, looking for the camera with the red light on, coughs up the puck to Jeff Halpern, who sends Bates Battaglia ahead on a one-on-one against Joni Pitkanen. The rookie bites on Battaglia’s move to the outside, leaving a clean sheet of ice for Mike Grier humming down the right side. Battaglia sends the puck across . . . Grier swats it into the net . . . mooooooooooooooooooooooooooooo.

Perhaps a tall, cold glass of milk will settle the ornery fans as the teams head off, Caps leading 5 - 0. 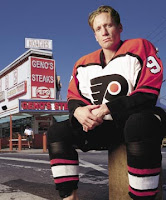 Third Period . . . Sunglasses talks into his sleeve, then gives Cassidy a signal . . . he’s sending the Blood, Sweat, and Grier line out to counter Hitchcock’s top line of Tony Amonte, Errol Flynn . . . oops, Jeremy Roenick, and Mark Recchi. The Caps win the draw, and Brendan Witt starts slowly up ice . . . sending the puck around the boards, Witt then stands sentry at the top of the Flyers’ zone. Behind the net, Halpern and Therien fight over the puck. Halpern skates away with it and sees a gaping hole between the hash marks. Roenick, apparently, is rehearsing lines from his gawd-awful NHL house party show instead of playing defense . . . “Anson, get your feet off the tabble . . .rats! . . . TA-ble.” Witt sees the opening and takes the pass from Halpern, leaving Hackett just enough time to see the puck go whistling by . . . “ta-ble . . . ta-ble . . . ta-ble . . .”

At the bench, Cassidy looks in the direction of sunglasses, who gives a subtle nod . . . Cassidy sends out the Fort Knox Line, and soon, the last nail in the coffin . . . Sergei Gonchar chips the puck along the boards . . . Lang picks it up behind the end line and sends it back to Jagr. The right-winger dances one way, does the funky chicken in another, then does the hustle around Eric Weinrich, snapping the puck over Hackett’s glove . . .

Nothing left now but to watch the fans trudge up the stairs to the freedom of the night air . . . still smells like Camden. The Caps skate out the clock, and the Flyers are left to contemplate both the 7 - 0 schmearing and the moos ringing in their ears (you ever seen Philly women? . . . “moo” is right!). In the locker room, Coach Cassidy is all smiles standing next to sunglasses . . . “what was the secret, Coach?” Sunglasses chimes in, “uh, we can’t talk about that . . . FBI business, you know.”