It's the sticks' fault!

"We're taking lazy penalties, holding and hooking and stuff like that. Coach has been saying that we can't take the lazy penalties. We have to keep our sticks down and keep skating."

"We have to use our legs more than our sticks We have to be patient when the opposition has the puck. These are the little details that are big."


Maybe these guys should practice killing penalties without the aid of sticks.
Posted by The Peerless at 7:38 AM 2 comments:

The Peerless Prognosticator is ON THE AIR!!! -- Caps vs. Devils, February 3rd

If it’s Tuesday, it must be Newark. And as appetizing as that prospect would be by itself, we have the added bonus of there being a hockey game to be played here tonight between the Caps and the New Jersey Devils, two of the best teams in the NHL at the moment. Unfortunately, given the way Boston is playing, it’s a battle for Miss Runner-Up and Miss Congeniality in the Eastern Conference as a single standings point separates the two clubs. But as for the game here in Paris in the Swamp…

Well, if it isn’t cousin Fearless. And where there’s one, there’s...

…Cheerless. Guys, what are you doing here?

"We heard so much about Newark, we had to sample the ambience for ourselves."

"Yeah, and we had to see Jerry Lewis’ birthplace."

"That’s not all...did you know that much of Newark’s charm lies in it wealth of cultural attractions?"

Well, no, that wouldn’t have immediately come to mind.

"Well, that’s what it says on the GoNewark web site. Anyway, bargain hunters can also head down Route 3 toward the 100+ outlet stores in Secaucus, or go a few miles south on the NJ Turnpike to Elizabeth’s Jersey Gardens, the state’s largest outlet mall and headquarters for a staggering range of off-price retailers."

"Oh, and that’s not all…Urbanized as it is, the Gateway Region still leaves room for nature. Right off Route 3 is the New Jersey Meadowlands Environment Center, where you can walk the boardwalk trail as it winds its way through marshes teeming with dozens of bird species."

Teeming with bird species? Or bird feces? And Cheerless, have you actually been to these places, or are you just reading this off the web site?

"Well, I haven’t been able to get out of the motel all day…I had a jersey breakfast dog this morning, and I’ve been…uh, occupied (urp) ever since…’scuse me!" 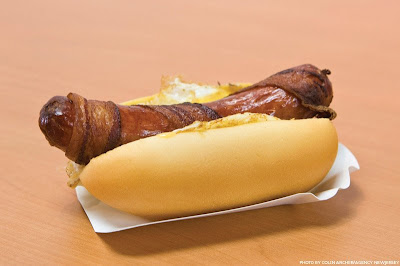 OK, so while Cheerless uses the facilities, we’ll take a look at the game. Tonight the Caps try to do what no team has done since Anaheim turned the trick on January 11th – beat the Devils. In fact, no team has beaten the Devils in Newark since Atlanta (yes, that Atlanta) won a 4-0 decision on January 8th. The eight game winning streak has propelled the Devils to the top of the Atlantic Division and into a dogfight with the Caps for the second spot in the East. They don’t come upon their fortune by chance… 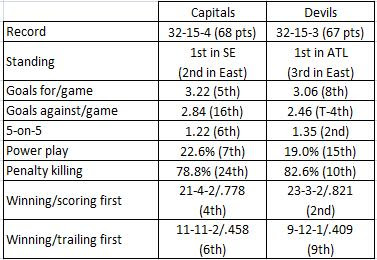 The Devils have outscored the opposition by 30-15 in this eight game streak and have held opponents to two or fewer goals three times. The thing is, though, the wheels might be coming off on this streak. In their last two games – against Boston and Pittsburgh – the Devils allowed three goals in each and have had really ugly stretches. Against Boston they coughed up a 2-0 second intermission lead by giving up three goals before scoring late and forcing overtime. Against the struggling Penguins they found themselves trailing 3-1 in the third period before rallying with a pair of third period goals to force another overtime.

This is a team that is, as they say, ripe for plucking.

But over the streak the Devils have had some fine individual performances. Their top scorers over the eight games include:

That is an example of the big guns delivering, the top four on that list being the top four scorers for the Devils for the season. Of that group, Patrik Elias has had the most experience against the Caps and has had the most success. He’ll come into this game having played 41 career games against Washington, with a 16-24-40 scoring line. Of those 16 goals, six have been game winners.

One player who did not show up among those top scorers in the recent eight-game streak is Brian Gionta. If there is one Devil in a slump (and therefore one who should be watched), it is the diminutive right winger. He has only two goals in his last 20 games (2-11-13, -4). He does, however, have a history of some success against Washington. In 22 career games, he is 7-10-17, +8, with a couple of power play goals and a game-winner.

The new “kid” on the block is Brendan Shanahan. The 40-year old is returning to his roots (he was selected by the Devils second overall in the 1787…uh, 1987 draft). He seems to be the sort who can, in fact, go home again. He is 3-1-4, with a pair of power play goals, in five games since signing with New Jersey.

Then there is goaltender Scott Clemmensen. With 33 appearances this year so far, he has already eclipsed the total number of games he played in the NHL coming into the season (28), thanks – if that is the word – to the arm injury suffered by Martin Brodeur that has kept him out of the lineup since November 1st. Clemmensen is 7-0-0 in the recent eight-game winning streak, 1.98, .926. The seven wins he has on this streak almost equal the number of career wins he had entering this season (eight). His 22-9-1, 2.29, .920 numbers might give him Vezina consideration, if he didn’t play for the Devils (it must be the system…) and the fact that his name is "Scott Clemmensen" and not, say, "Henrik Lundqvist" (who, by comparison, is 24-15-3, 2.58, .912).

Chris Clark is now out for the season. One could say that the team has been Ovechkin’s for most, if not all of this year, but with the captain now officially sidelined for the duration, the dynamic is a little bit different. Ovechkin probably won’t wear the “C” (not this season, at least), but he is now the de facto captain. Just a little more responsibility on his shoulders. He’s seemed to live for such moments (his big, glass-shattering introduction to the NHL in his first game; the run of goals after signing his big contract; his performance in his first playoff appearance last spring). One has the feeling, especially on the heels of his five-goals in two games performance over the weekend, that this could be a big week for the big winger.

Hey, Cheerless…you ok in there?

"Ughhhhhhh… no more jersey breakfast dogs for me…"