Karl Alzner
Theme: “A man's accomplishments in life are the cumulative effect of his attention to detail.”
-- John Foster Dulles

The arc of Karl Alzner’s career is not that meteor flashing across the sky and gone in an instant. It is that jet flying through the night, the light moving quietly across the night sky, moving relentlessly forward and making constant progress toward its destination. And what he has become as a product of that steady progress is as solid a defensemen and one could want for a team that has spent the last two seasons remaking itself into a defensively responsible club.

Drilling through the numbers, you can start with the fact that he led the team in plus-minus. Not only did he lead the team, he did so at just about every milepost for the season – tied for first after 10 games, first after 20 games, first after 30 games, after 40 games… See a pattern? There were some hiccups along the way. He was a minus-2 over his fourth ten-game installment of the season (minus-5 over the last four games of that stretch, during which the Caps went 2-2-0 and allowing 13 goals, seven of which he was on ice for). He also had a minus-5 in his sixth ten-game installment, all of which was a product of the last five games of that run, during which he was on ice for nine of 18 goals scored.

Then there are his top-end numbers. His year to year change in scoring was significant (although he still cannot be said to be a “two-way” defenseman), jumping from 2-10-12 in 2010-2011 to 1-16-17 in 2011-2012. The only odd change, if one wanted to harp on something, was a drop in hits (down 24 from last season). But it remains hard to argue with his efficiency and consistency from year to year and from ten-game segment to segment. Odd Alzner Fact… When Alzner took on Tampa Bay’s Steve Downie in a fight on January 13th it was his first fight in the NHL. It probably did not have the desired effect. The Caps held a 3-0 lead when the two went at it, but had to hold on for dear life after in a 4-3 Capitals win. It was Alzner’s first fight of any kind since taking on J.D. Watt in a Calgary Hitmen/Red Deer Rebels game on September 22, 2007. Alzner’s Hitmen won that game, 4-1.


Game to Remember… Alzner logged a season high 27:40 of ice time (also a career high in regular season ice time) in a 5-3 win over the Ottawa Senators on December 7th. He led the team in both even-strength ice time (22:27) and shorthanded ice time (5:13). In addition he had three blocked shots and finished a plus-2.

Game to Forget… Alzner was on ice for all five goals against in a 5-3 loss to the San Jose Sharks at Verizon Center on February 13th.

Post-season… Alzner was on ice for four of the 15 goals scored by Boston in the opening round series. In fact, it was the Bruins’ ability to score (or not) with Alzner on the ice that factored in game results. In four Capital wins Alzner was on ice for a total of 1 goal. Three losses, three goals against while on ice. He was not so lucky (or perhaps effective) in the second round. Alzner was on ice for at least one goal in six of the seven games, seven of 15 total goals scored by the Rangers. He was on ice for both Ranger power play goals in Game 5 that led to the Rangers tying the game late, then winning in overtime. It was the pivotal point of the series, the difference between the Caps winning Game 5 and taking a 3-2 lead in games back to Verizon Center, and having two elimination games to have to win to advance.

Overall he was on ice for 11 of the 30 goals scored against the Caps in the post-season (36.7 percent), compared to 10 of 24 goals in the 2011 post season (41.7 percent). That might be considered improvement, but the fact that the Caps as a team finished the post-season having allowed 20 percent fewer goals per game than last year, it might not be as much an improvement as it seems at first look.

In the end, as we pointed out last year at this time Alzner has played the most regular season games of his draft class defenseman cohort (currently 215 to 187 for Carl Gunnarsson of Toronto). He has the second highest plus-minus (plus-23 to Ryan McDonagh’s plus-41). For his reputed lack of offensive firepower he has the fifth-highest point total of defensemen in his draft class (20 defensemen having dressed for at least one NHL game). That 215-game total is also impressive in that it reflects one game missed to injury in two full seasons and parts of two others (a hand injury that caused him to sit out the December 30, 2008 game against Buffalo). He is not a big hitter (tied for 107th of 297 defensemen dressing in the regular season), but he is effective in preventing goals, which is the object of the exercise after all. His (and the team's) stumble in Game 5 of the Ranger series notwithstanding, his improvement is less meteoric than “the cumulative effect of his attention to detail.”

Email ThisBlogThis!Share to TwitterShare to FacebookShare to Pinterest
Labels: 2011-2012 BY THE TENS, Karl Alzner, the peerless prognosticator, Washington Capitals

Home is Where the Heart Is 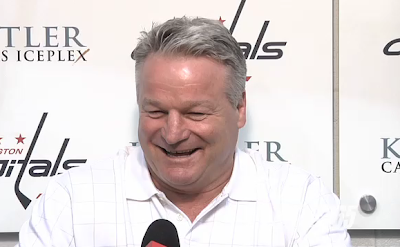 “Breakdown Day” was as much “Breakup Day.” On a day when the players take their exit interviews and meet the media one last time before going their separate ways for the summer, the news was unusual out of Kettler Capitals Iceplex.

The top story, if not entirely unexpected (except perhaps for the timing), was the announcement by Head Coach Dale Hunter that he would be relinquishing his position with the Capitals and returning to “the family business,” the London Knights hockey team in the Ontario Hockey League.

In the days to come there will be a lot of commentary about the decision, and folks being what they are, will try to find some subtext or hidden meaning in Hunter’s leaving…


And there was the first wave of commentary, non-plussed or complimentary…

“[His leaving} seems out of character…That’s not what Dale Hunter does. Is it?”

“He convinced this team to play with a level of selfless sacrifice and defensive commitment it hadn't exhibited before under Bruce Boudreau. This coaching staff offered a psychological blueprint for a team that has lost its wits during postseason adversity in the past.”

But while Hunter, in his exit press conference, sounded proud of the Alexes for trying to do the right thing (he lit up when talking about Alexander Semin sliding to block shots with “the right timing”), he sounded like a man liberated from something he liked to pursue something he loved. Just look at that picture at the top. That does not look like a man with an ulterior motive for leaving the club.

Perhaps the most telling comment today comes from a Hunter – brother Dave – who said, ““He really likes coaching kids.” Dave also remarked that ““Dale always said he’d do it until the rest of the year and then he’d see. [He and George McPhee are] buddies. He said ‘if they don’t like me, they can get rid of me, too.”’ That impresses us as the mind of a man who might like his job – even if it is coaching in the NHL -- but does not derive his identity from it.

And maybe that’s what it comes down to. He met the challenge of coaching in the NHL and took a team deeper into the playoffs than almost anyone thought possible when the playoffs began. He taught the players a hard lesson in the importance of will as much as skill as an ingredient to success. But Hunter also has his farm, his family (“My dad’s still 76 and he still scouts for us”), the “family business,” and he gets to coach kids on their way up. That is who he is.

Sigmund Freud, the founder of the discipline of psychoanalysis, is said to have uttered, “sometimes a cigar is just a cigar,” an admonition that sometimes there just isn’t any deeper meaning than what you see. We take Dale Hunter at his word. Sometimes a resignation is just a resignation.

Good luck, Dale.
Posted by The Peerless at 7:18 PM No comments: