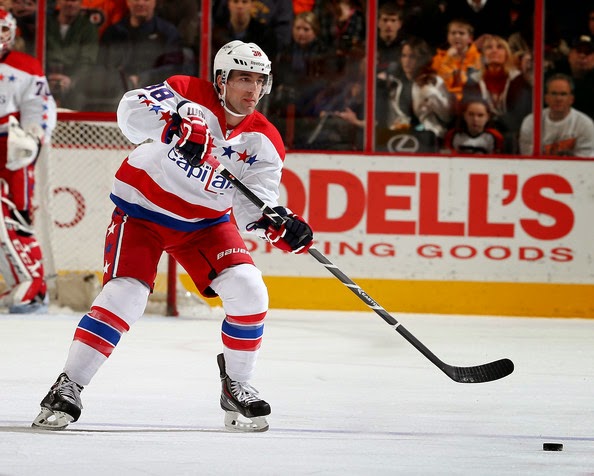 “Here is the rule to remember in the future, When anything tempts you to be bitter: not, 'This is a misfortune' but 'To bear this worthily is good fortune.'”
-- Marcus Aurelius

If there is a player who has endured more on-ice misfortune over the past two seasons than Washington Capitals defenseman Jack Hillen, keep the news to yourself. We don’t want to be more depressed. Hillen, who signed a one-year deal with Washington in July 2012, had to wait until the NHL and the players association settled their labor differences before he could take the ice with his new club at the start of the 2012-2013 season. There he was, though, stepping out on the ice January 19th – opening night. He skated five shifts in the first 24 minutes of the game. They were rather eventful, two of those shifts ending in penalties (one for each team), and a third ending in a Lightning goal. The sixth shift of his night was eventful in a different sort of way.

Vincent Lecavalier sent Hillen into the boards with a check that left Hillen with a separated shoulder that would keep him out of the lineup for the next two months. He finished the abbreviated season appearing in only 23 games, going 3-6-9, plus-9. It was a mere warm-up for how he started his next season.

Hillen, who re-signed with the Caps on a two-year deal the previous April, started the first year on his new contract by getting through Opening Night of the 2013-2014 without incident. It was the second game that did him in. On just his third shift of the game his right leg was pinned awkwardly against the boards by the Calgary Flames’ Lance Bouma. He sustained a fractured tibial plateau – a broken leg – that required surgery and five months of recuperation. He returned in March and played in 11 games. In that 11th game, against the Los Angeles Kings, Hillen was curling through center ice in overtime when he crossed paths with teammate Alex Ovechkin. Hillen is 5’10”, 190 pounds; Ovechkin is 6’3”, 235 pounds. Physics being what it is, Hillen took the worst of the collision. He suffered a concussion that ended his season.

It was not even the first time he suffered a serious injury at the hands of Ovechkin. While playing for the New York Islanders in January 2010, he took a slap shot by Ovechkin to the face, suffering a broken jaw and missing six weeks. As for last season, Hillen appeared in only 13 games, posting a scoring line of 0-1-1, minus-4.  The hockey gods have not been kind to Jack Hillen.

He is, as you say, cuz, “a reasonably consistent producer on the offensive end blah blah blah.” Unfortunately, he is not consistently in the lineup. It’s not all on him, getting hurt and all, but 36 games over two seasons? After appearing in career high 69 games with the Islanders in 2009-2010, his games played has gone 64, 55, 23, 13. It’s getting where you might be better off counting how many periods he played, or how many shifts. And he was not such a great possession player in those 13 games last season. Eleventh of 14 defensemen in Corsi-for/on-ice; same in Corsi-relative/on-ice. His PDO (968) was second worst among those defensemen, which suggests bad luck, but hey, that’s just the sort of luck that has plagued Hillen in his two years here. Somebody owes this guy… a lot.

The Big Question… What is the over/under on games played for Jack Hillen this season?

That is as much a question that pertains to his relationship to the re-tooled roster as it is to his penchant for injuries that rob him of huge chunks of games. If the top-five are John Carlson, Karl Alzner, Mike Green, Matt Niskanen, and Brooks Orpik; and you believe that the 6D spot is Dmitry Orlov’s to lose (once he is fully healthy), then Jack Hillen is competing with John Erskine for the 7C spot. The odd part about this is that it is Hillen’s susceptibility to unavailability for long stretches that might make him ill-suited to be ready at a moment’s notice, to be “available.”  Circumstances what they are, the over/under might be the number of games he played last season: 13.

Jack Hillen is something of the forgotten defenseman on the roster. Caps fans generally know the top-five, follow the injury progress of Dmitry Orlov, opine on the merits of a Steve Oleksy, Nate Schmidt, or a Cameron Schilling on the roster. But Hillen? Perhaps it is his quiet demeanor, but sometimes it escapes notice that he is still on the parent roster and might very well open the season as the sixth defenseman, especially since he plays for a coach with whom he is familiar.  Hillen played for Barry Trotz in Nashville.

That he has come back from two serious injuries says that his demeanor should not be confused with a lack of determination. Each was the sort of injury that could cause a downward career spiral, but he managed to work through both and seems to have survived his collision with the Russian locomotive intact as well.

The new beefed-up roster on the blue line is what will present Hillen with perhaps a bigger challenge. His resume does not argue for occupying a top-six spot on this roster, even if he is in full health. On the other hand, in the nine seasons since the 2004-2005 lockout the Caps have used between nine (2005-2006, 2007-2008) and 14 defensemen (last season). Even if Hillen gets only spot duty, there would seem to be a place for him on this roster. He deserves at least that kind of good fortune.

Posted by The Peerless at 6:18 PM No comments: