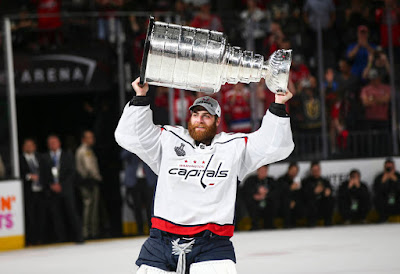 Being a sports fan is not just rooting for the logo on the jersey.  It means developing attachments, even at a distance, with players.  We cheer for them on the field, we get a peek into their personal and off-ice lives, and these days we follow them on social media.

But it is a relationship that generally has a shelf life, sometimes far briefer than we would like.  A player is drafted, we develop our attachments as he comes along through the system, we root for him as he takes his place and makes his mark with his – our – team.

And then, he is gone.

In most instances, we might feel a twinge of regret, but then we move on as the player blends into his new surroundings, whether that is another team or retirement.  But then there are those rare instances in which fans develop a special attachment to a player, and his departure stings more keenly than other departures.

That is how a lot of fans feel today as what seemed inevitable for the past year is finally coming to pass.  Braden Holtby, after a dozen years in the Washington Capitals organization, will be moving on to another city.

One might never have seen this coming when Holtby was introduced to the Capitals back in 2008.  He was a fourth-round draft pick, the tenth goaltender taken in his draft class.  He was taken 93rd overall in the 2008 Entry Draft, between Samuel Groulx and Vinny Saponari, neither of whom ever played in the NHL.  And, his record in Canadian juniors (Saskatoon Blades) did little to distinguish him or suggest he would have a long NHL career, not with a 42-59-15 win-loss record, a 3.01 goals against average, and a .903 save percentage.

But then, things took a turn.  In the season after he was drafted, he went 40-16-4, 2.62, .917 with the Blades.  He turned pro the next season, splitting time between the South Carolina Stingrays in the ECHL and the Hershey Bears in the AHL, going a combined 32-10-5, 2.48, .915.  Caps fans had little up-close familiarity with the young goalie, though.  That changed, at least it did for us, during Development Camp in July 2010.  Day 4 of the camp featured a scrimmage in which the prospects took part.  Among those prospects was a first round draft pick of considerable skill and considerable expectations – Evgeny Kuznetsov.  And there was Holtby, the fourth round draft pick with perhaps a more modest resume and perhaps lesser expectations.

Their respective stations in life mattered not at all to Holtby when the two got tangled up trying to play a puck.  As we put it at the time…

“Braden Holtby might need his vision checked. That guy whose legs he took a one-handed slash at (and connected) happened to be the Caps first round draft pick this past June. Kuznetsov is his name. Seems the young forward got a bit too close to Holtby as the goalie was trying to play a puck (well outside the crease, it should be noted), got tangled up with him (leading to a goal when Holtby could not retreat to his crease in time), and as he was starting to head back up ice after the score took the business end of Holtby’s stick in the back of the legs, causing him to turn in wonder before limping to the bench. This prompted a few comments from the upstairs crowd directed at Holtby, although those folks might not to have the term “heat of the moment” in their lexicon. Was it the smartest thing Holtby’s done this week? We’re going to bet on “no,” but it’s hardly an unprecedented reaction from a goalie, even on one of his clubmates.”

Caps fans had witnessed more than a bit of orneriness over the career of Olaf Kolzig.  Holtby gave notice the tradition might continue.

The attachment between player and fans only grew from there.  Holtby got his first taste of NHL action in the regular season that followed, earning a win in his first NHL appearance – stopping all four shots he faced in ten minutes of a relief role in a 5-3 win over the Boston Bruins in November 2010.  He had only 14 appearances in that first season, but it was quite a start.  He went 10-2-2, 1.79, .934, with two shutouts.  There was, however the matter of the goalies ahead of him on the depth chart – Semyon Varlamov and Michal Neuvirth, both of them only 22 years old themselves, a year older than Holtby.

Varlamov was gone the following season, off to Colorado, but there was still Neuvirth on the club, and the Caps obtained veteran netminder Tomas Vokoun, preserving the log jam in front of Holtby.  He was limited to seven games in the 2011-2012 regular season, but he was thrust into a starting role in the postseason when Vokoun and Neuvirth each suffered injuries late in the season.  He was brilliant, backstropping the Caps to an opening round win over the defending Stanley Cup champion Boston Bruins before falling in the second round to the New York Rangers.  In 10 games settled in regulation time he allowed more than three goals only once, and nine times in 14 games he allowed two or fewer goals.  He went 7-7, 1.95, .935.

Then came the 2017-2018 season, perhaps the strangest and, ultimately, most wondrous of Holtby’s career with the Caps.  He had a good win-loss record (34-16-4), but his underlying numbers fell off (2.99 goals against average, .907 save percentage), and he went without a shutout over a full season for the first time in his career.  What is more, his performance slipped significantly late in the season (10-8-4. 3.47, .893 over his last 22 games), and Philipp Grubauer was picked to open the Caps’ postseason against the Columbus Blue Jackets.  Grubauer’s postseason lasted five periods, having lost Game 1 in overtime and trailing in Game 2, 4-3, after 40 minutes.  Holtby came in to start the third period, and while he would take the loss in overtime, he reclaimed the top spot in net.

The rest is history.  Holtby went 16-6-0 to close out the postseason with a 2.17 goals against average and a .922 save percentage with two shutouts, helping the Caps to their first Stanley Cup championship and adding a bit of legendary flair along the way that would become simply, “The Save”…

That postseason would be the pinnacle of Holtby’s career in Washington.  He struggled in the next two seasons, going 57-33-11, but posting a 2.95 goals against average with a .905 save percentage.  His postseasons over those two years were similarly disappointing, going 5-10, 2.58, .910, the Caps going out in the first round of the playoffs in each year.

The last two years might be a smudge on his career in Washington, made more noticeable by their recency.  They do little, however, to detract from his standing as the best goaltender in Capitals history and as one of the elite netminders of the last decade in the NHL.  Over the last ten years, Holtby is highly ranked in a number of league categories (minimum: 5,000 minutes):

His postseason rankings are even more impressive (minimum: 1,000 minutes):

But while being a goalie of superior talent and performance is one thing, there is more to a player to whom fans develop a special attachment.  Holtby has a style all his own, in terms of how he prepares for games…

And he had his own sartorial style… 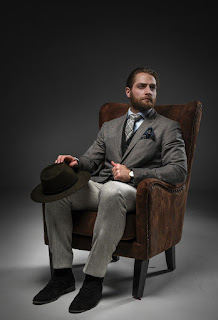 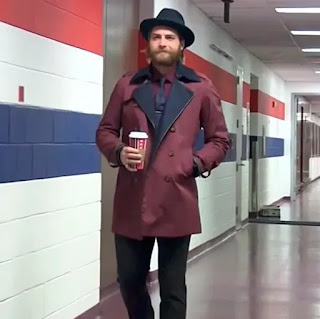 But he also exhibited the sense of social awareness that makes the attachment between player and community stronger, as in his support of Capital Pride events…

Braden Holtby is one of those rare players whose talent and humanity have made him iconic in the local community and among Capitals Nation.  It is hard to think of a parting in four decades of Capitals history that is as much equal parts good cheer and good wishes for the player, and sadness at the realization that his departure is real and finally here.  Wherever he goes, Caps fans will be rooting for him every time he faces 30 of the other 31 teams in the league (after Seattle joins the league).  And even on those occasions in which he comes out on top against his old team, Caps fans might sneak a smile.

Posted by The Peerless at 12:57 PM No comments: